JFK is home to out-of-town jackrabbits 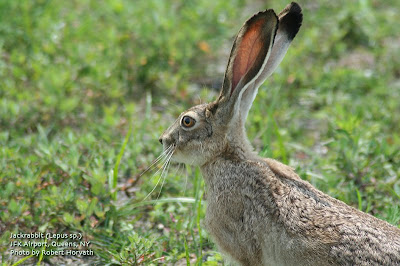 I did a little jackrabbit research to try and determine which species may be surviving at [JFK] airport. Without a rear view photo of the species in question I could only narrow it down to a White-tailed or Black-tailed Jackrabbit. Based strictly on the open, grassland habitat, I'm guessing that it is more likely a Black-tailed Jackrabbit. White-taileds are generally found in mountainous regions. It is also interesting to learn that jackrabbits (or "hares") are not related to our Eastern Cottontails.

Yep, those are Black-tailed Jackrabbits, a southwestern species that has been present at JFK since the 1950s. And 39 of them were involved in runway incidents from 2000-2008.

(Please don't tell Bloomberg.)
Posted by Queens Crapper at 1:10 AM

omg, KIller Bloomberg will slaughtered those poor rabbits, they don't pay rent and make more money for him so they have no value in his evil eyes.

lmao to the last comment! and don't tell bloomass but there are so many birds back in college point. lmao dumb ass waste of money and killing of beautiful birds.