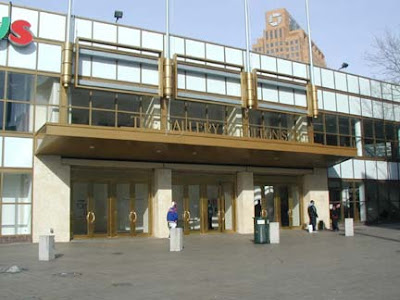 The Bloomberg administration, moving to restart stalled development in the heart of Downtown Brooklyn, has picked a big housing and retail complex to receive $20 million in tax-exempt bonds financed by the federal stimulus program. The complex, City Point, would bring hundreds of apartments and a large shopping center to the eastern end of the Fulton Mall.

The city also selected a project to build a supermarket and shopping mall at Arverne by the Sea, a residential complex on the Rockaway Peninsula in Queens, for $16 million in financing, leaving roughly $90 million more in bonds to be distributed later, said officials at the city’s Economic Development Corporation.

The proposed financings still have to be approved by the city’s Capital Resource Corporation, a body administered by the development corporation that is set to hold a public hearing on them next month. Questions are likely to arise about the role of public financing in private development and the potential displacement of small businesses.

“This is a sort of David-and-Goliath example of small businesses that are paying the rent and providing services to a diverse constituency of Downtown Brooklyn and having something kind of dropped on top of them, which is a big wealthy developer getting subsidies,” said Bettina Damiani, director of Good Jobs New York, which studies the use of economic development incentives. “So the impact on the local community needs to really be taken into consideration before we move forward with economic stimulus.”

Photo of Albee Square Mall from Forgotten NY.
Posted by Queens Crapper at 1:24 AM

Left, right, center, moderate, Democrat, Republican, libertarian et al, please admit that this is political patronage. It gives arbritrary awards to certain constituencies. Some districts get rich, many districts, just as needy, get NOTHING.

Federal stimulus is like the T-shirt shooter at sports events. T-Shirts are shot, everyone gets excited, and only a few get a T-shirt.

And I am being kind bc it is much less arbitrary.

I wonder if La Famiglia Di Vallone is going to get together with Emperor Bloomberg to steer some stimulus money to HANNAC.