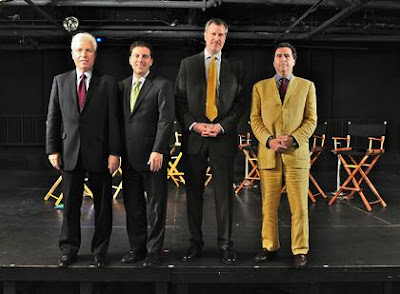 The most heated rhetoric came when the candidates differed on the issue of the massive Willets Point redevelopment and the use of eminent domain, the process by which a government can seize privately owned land for the public good.

“I think it is valid if it creates a substantial number of new jobs and affordable housing, and I think Willets Point does that,” he said.

“The very presence of it changes the terms of the bargain,” he said, comparing a municipality with eminent domain power to a gun-wielding Al Capone.

“If it comes to eminent domain, the city should go out of its way to relocate those small businesses within the community, to the extent it can,” he said.

“The city did not provide services to the businesses out there,” he said.

Sparks flew as the candidates spent some time squabbling over the finer points of the Supreme Court decision that enabled public-private redevelopments via eminent domain.

DeBlasio: How is this a "certain circumstance"? The entire project is uncertain - no developer, no plan, no approval for the highway ramps, the number of jobs keeps shrinking and the affordable housing certainly will too (it always does) and the city is broke.

Gioia: If it is so wrong, why did you vote in favor of it? Not only did the mayor put the gun on the table, but you loaded it for him. Asshole.

Green: "To the extent that it can?" What the hell does that mean? The city can just say, "Well, we tried, I guess we'll just have to send you packing now... As a consolation prize, here's 1/4 of what your property's worth, now get out."

These three want to advocate for us with attitudes like this? Doesn't sound like they'll stand up for private citizens if they stand in the way of despotic development plans.

VOTE FOR NORMAN SIEGEL.
Posted by Queens Crapper at 1:48 AM

This probably won't go over well here but, I am in favor of keeping E-D on the books for cases where -public- projects are involved.

I'm also likely the only one to here to ever have faced this situation.

Back in the late 80s I bought several "unimproved" plots out the Poconos at tax sales. I sold all but one which I considered building on.

This was/is a typical late '60s crap suburban development with central well water but NO sewer system..only septics. By the early 1990s the water table had begun to have excessive bacteria levels and they needed a new well/filtering station.

Since my property was vacant, I received a "request" via registered mail to sell it to the Association for the new plant.

I had no experience in these matters and took this to our lawyer. His answer: "this will be an E-D case you may as well negotiate to sell".

I did and got a reasonable price. If I had been a greedy bastard I could have fought for more but why...what right did I have to squeeze these people when they clearly needed that property for their community.

I know the "property rights" ideologues will be all over this, and clearly some decisions to apply ED backed up by a conservative Supreme Court and republican pols in bed with developers has led to -some- cases of abuse, I don't believe the law should be completely repealed.

If you think it takes a long time to site schools, libraries, hospitals now...it would be -much- worse if our City were left to the tender mercies of landlords.

ABSOLUTELY AGREE - V0TE FOR NORMAN SIEGAL. START VOTING FOR SOMEONE WHO IS NOT PART OF THE CLUBHOUSE AND WHO WILL WORK FOR YOU.

"This probably won't go over well here but, I am in favor of keeping E-D on the books for cases where -public- projects are involved."

Everyone is in favor of keeping eminent domain on the books for cases where PUBLIC projects are involved.

Roads, schools, libraries, hospitals and sewer systems ARE public purposes. However, taking land from one private person to enrich another private person is eminent domain ABUSE.

Why is it so hard to understand this?

Crapper - you were against ED for the high school site in Maspeth.

I am all for cleaning up and developing Willets Point, and getting rid of those horrific junkyards.

Norman Siegel for Public Advocate! I have series of YouTubes filming eminent domain abuse by Columbia University who is mass evicting an entire neighborhood Manhattanville and Norman Siegel is there speaking up for his clients.

Last week he showed up at the Christine Quinn debate with her candidates and Norman was heroic fighting for the rights of so many people turned away by NYU and The Villager that sponsored the event including a long term community member who made an Olympic effort to get there.

He eventually did get in with the help of Norman, me documenting and posting the debacle right from the street on to YouTube and many community members fighting on his behalf and yelling this is an OUTRAGE!!!!

NYU and The Villager turned away the press including NY1. They kept saying they had limited space but NYU is a bigger real estate magante than Columbia U. and doesn't even need to abuse eminent domain to get the job done. NYU has mega dormed the East Village to death and has more property than anyone else but they couldn't find a space on their massive real estate to accommodate the public and the press.

NYU came off looking like a horror show. How could they not find a space large enough for the people and literally turned away so many people including seniors, NY1 and other press. Based on Quinn's actions you could see why her pals would not want the people and press there and stacked the audience with Quinn, Mike Bloomberg's mini me's audience.

John Sexton the president of NYU ran down to City Hall to testify NYU the evil empire needs Mike Bloomberg for a third term. They have more expansion and who else will support their tear down of historic buildings like St. Ann's at 120 East !2th and the famous theatre in the W. Village.

We have to vote out anyone catering to Mike Bloomberg and community crushing developers.

We need someone to truly be an advocate and Norman Siegel clearly has the most experience and legal knowledge of any of these candidates.

Great photo...even Norman's suit stand out amongst the crowd.

I was against ED for the high school site in Maspeth because negotiations weren't completed with the owner and the city council hadn't approved the high school and therefore it was premature was no need to have an eminent domain hearing. I also think it was not the appropriate location for a high school due to a number of factors. But to use eminent domain to build a school I have no problem.

And there are plenty of businesses there that are not junkyards. Are you willing to throw the baby out with the bathwater? The properties that are junkyards are on the streets that are pockmarked with potholes and lack sewers. How do you expect a property to develop properly when the city intentionally denies services to the area in order to be able to declare them blighted?

Gag....puke...I'm just so sick of seeing that pussy faced public joke Mark Green turning up like a bad penny all the time.

He pops up as the perennial spoiler in a lot of elections.

Who pays him off to split the votes?

what about an investigation

Figures that Green is a Vallone supporter.

Everyone - Get out on election day and vote for Norman Siegel. We need someone to represent the voters and we need someone who has our back and will protect our property.
NORMAN SIEGEL FOR PUBLIC ADVOCATE!

"...what right did I have to squeeze these people when they clearly needed that property for their community."

You had the right to fight for your property and its value. You chose not to and that's fine. But not to recognize your right is the problem, not that you chose to waive it.

BTW, what the hell did you do to Wade? MIA for a few weeks since your dialogue.

Battening down the batches before the hurricane?

Norma Siegel is people's lawyer. He fought for us for years, he has my vote

http://www.youtube.com/watch?v=AD031ICvYhg
Scathing piece by The Village Voice just came out exposing Christine Quinn exposed in yet another scandal and this one is going to be hard to plead ignorance.

The link is in the text portion.
Thanks Queens Crap.
best,
Suzannah

Without any doubt Norman Siegal is a people's attorney and will always be and has fought against injustices for years and always will.

Be informed voters or you will get what you deserve.

Mark Green already had his chance. Let a younger face have the opportunity. Public office sohuld not be a revolving door. Once you're retired, don't come back.

Public Advocate is such an important job. Isn't it? Quick, name the incumbent. Alright, then name one thing she's accomplished.

Right. We don't know who it is, and what the job even does. It's a feel good waste of money.

So, let's vote for ideologue in the clown suit!