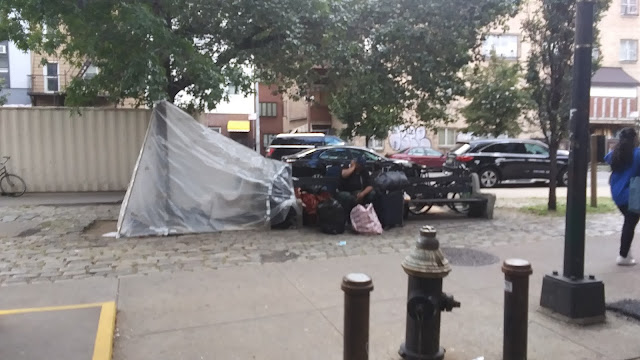 Victor Lopez, 59, has been struggling to hold a job for most of his life. Since the pandemic hit, he got passed around to different homeless shelters, where Lopez said he faced terrible violence. Now, all he wants is to find a safe haven at the Hungry Monk shelter in Ridgewood.

Lopez said he’s been to many shelters throughout the city but never felt more unsafe than in Harry’s Place in Bed-Stuy, Brooklyn. Close to 50,000 people in New York City are experiencing homelessness and Lopez knows his situation is not unique.

“It’s terrible,” Lopez said. “It’s crazy in there. Why would they put me in a shelter like that? I didn’t give anyone any trouble. I’m out here trying to get better and get help, not to fight with people.”

Lopez has been trying to get a bed at the Hungry Monk facility, but unfortunately, no beds are available. Father Michael Lopez (no relation), who started the nonprofit, said they have rarely had a free bed since they opened in 2019.

Lopez’s problem is indicative of a larger issue faced by many around Queens and the rest of the city. Council member Robert Holden said Department of Homeless Services Commissioner Steven Banks is to blame. Holden said Banks had been an advocate for the large “warehouse” shelters that pack people in without privacy and barely any security, resulting in the dangerous conditions Lopez spoke of.

Banks announced his decision to step down last week. Holden is hoping this will kick off a more responsible homeless response.

“I would much rather have smaller, faith-based shelters along with letting a community have a say in where they would be located,” Holden told QNS. “The organizations that run the big shelters for the city have contracts that they often do not fulfill, such as providing adequate security, etc. Banks did not hold them accountable. Residents of the shelter often harass neighborhood residents and shopkeepers, as well as steal from them. Banks also created a culture of corruption, with one scandal after another.”

I hear the homeless shelters back home in Mexico are much nicer. He should go there.

This one sided hearsay story doesn't ask or disclose why Lopez has been incapable of holding a job all his life. Is he even from New York, Illegal, a wino, drug, mental problems, long crime & arrest records?
Why wont his family or any relatives take him in? I'm sure he has plenty, perhaps they are in Mexico or don't want to know him.
Perhaps his relatives and so called former employers (if such exist) know something this reporter doesn't.

Why hasn't this reporter asked neighbors, relatives, former employers, cops what's going on with him. It's a reporters JOB to do such!!!
This story is quite a crock bleeding heart liberal crap !!

NYC has 'safe injection sites' for junkies but no places for poor people to live.

Face it the is problem began with Reagan letting out all of the mental hospitals, etc in the 80's and not having any kind of plan for these people. Mix in the loss of so many manufacturing jobs, closing of steel mills, etc and trying to end unions that provided good pay and safe working conditions and thrown in outrages home and rent prices. This country has never had such a homeless problem like it does now and these all play into this factor.

@"Face it the is problem began with Reagan letting out all of the mental hospitals"
Are you one of them ?

@"Face it"
Dummy did you notice the new NYC bail reform disaster. Nothing to do with the Federal Government. It's the local/State laws that are to blame not Reagan.

You are talking about Ronnie Reagan, the man who destroyed the American middle class.
Then again he did defeat communism by just saying "Tear down that wall", and it magically fell down.