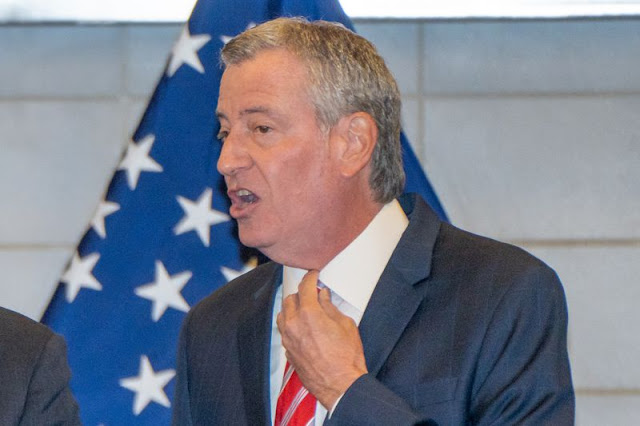 The COVID-19 testing operation created in 2020 by Mayor Bill de Blasio (Working Families Party-NYC) when New York City was the epicenter of disease and death was supposed to lead the City out of uncertainty. Since then, the testing company has blossomed in testing contracts and worth, but its record of leading has been called into question after it was late in reporting the newest strain of the Coronavirus to threaten New York’s future : the Omicron variant.

As global worry has spread about the reported rapid rise in cases of the Omicron variant in Africa — a “heavily mutated” strain, which has led to border closings and travel bans amidst a new round of confinements — the world turned to Minnesota health officials to learn about the first case of Omicron in New York City. The silence from the City-created testing facility, the Pandemic Response Lab, did not go unnoticed by online critics of the Government’s pandemic response. Mayor de Blasio has been praising the Pandemic Response Lab since it’s creation, even as some media questioned the return on the City’s unknown investment in the company. Though Mayor de Blasio has hailed the testing being done by the Pandemic Response Lab for public schools as the “gold standard,” that claim was later rejected by a report published by the Gothamist news Web site.

After Progress New York made an interview request to the Pandemic Response Lab for this report, its parent company published a news release, announcing the sequencing of the lab’s first detection of the Omicron variant. Representatives from the parent company later promised to appear for an interview with Progress New York, but they never answered the request after inquiring about the subject of the interview.

The Pandemic Response Lab has reportedly succeeded in cutting the time and cost it takes to process COVID-19 tests. Since it operates as a private sector business, its first order of business is profit, not the use of its funding to promote or protect the public health, regardless of cost.

The fortune-making from the Coronavirus pandemic has triggered accusations that the Government response to COVID-19 has led to large transfers of wealth. It’s unknown how much Government assistance the Pandemic Response Lab has received. It was created in 2020 by the City of New York’s corporate welfare arm, the New York City Economic Development Corporation. It began receiving testing contracts from the City’s public hospital system, and that has reportedly been expanded to include test contracts for individuals in the City’s jail system and the public school system.

As a result of its growth in Government contracts, the corporate owner of the Pandemic Response Lab, Opentrons Labworks Inc., was able to finance an expansion to Washington, DC ; Los Angeles, CA ; and Seattle, WA. In September, Opentrons secured $200 million in new investments by a team led by Softbank Group Corp., which valued the parent company at $1.8 billion, according to a report published by the Bloomberg news service. The pandemic has created a lot of wealth at Opentrons. Last year, the company’s valuation was only $90 million, according to the Bloomberg report, making its current valuation a 20-fold jump in worth.

The Pandemic Response Lab’s focus appears to be profit-making for its parent company. As a result, the City of New York was late in reporting the Delta variant. As revealed by Progress New York, the first time that the Delta variant was reported in New York City was in mid-May, in a retroactive disclosure in an overdue weekly variant sequencing study, even though the virus had by that time spread from India to Europe. Later, as the Delta variant was itself evolving into new sublineages, Progress New York noted that the City of New York was not reporting the AY.3 subvariant at a time when its spread was possibly threatening another confinement in the State of Israel.

Big Bird is facing a conflict is like a one-legged man in a butt kicking contest.

Can't fix a pot hole what do the Sheeple expect ?

People were warning of this from the very beginning, but they were shouted down, silenced, and deplatformed. Right ?

How many Commie Authoritarians does it take to change a light bulb ?

Are NYC Covid Camps next ?
Do Liberals agree ? It's already happening...#BLUEANON

“Perception,” as dictated by the legacy media to an ignorant public, is everything.

deBozio should call the High Priest of Science next time !
When Pope Fauci speaks of science he is infallible.

The kill shot is working as intended, now mandating it makes one complicit in mass murder, genocide?

No wonder the un-elected EU chief Ursula von Leyden wants to do away with the Nuremberg code.
Slick Xiden and DeBozo want the private companies to be liable it seems.
Is this about looted pension funds and looted 401k funds?

NYC is really good at creating copy-cat services that already exist at both the state and Federal level. As such, they do no additional good, but they do serve the over-riding goal of NYC government: handing out goodies to the connected and key constituency groups. Boss Tweed looks up from hell in amazement at how much graft goes on today compared to his times.

More baseless hysteria. Yay!
This will NEVER end, will it?

And now he wants to make private businesses to all be vaccinated even though nyc is near 100 percent vax rates and its proven that this omni virus is LESS deadly than delta and only has minor symptoms. Maybe one of the 5 year olds (that he's making show their vaccination card) can step in to be mayor for the next 3 weeks, we would be better off.

Thank you Dr. Doofus II. I bet you got this from a Vietnamese study published in English. Dr. Doofus I gets his from German studies in English. Just like Tweedle Dee and Tweedle Dumber.
Fuck Donald Trump

It's all about the Crooks and Idiots running the World !
Prove Me Wrong...

" I bet you got this from a Vietnamese study published in English. "

Wouldn't make an iota difference, but with your GED you wouldn't know, ALL SCIENCE PAPERS are published in English.
For the uneducated like yourself there is Google Translate.
You wanting to have sex with a former DNC financier is really a private matter, is no concern to anyone else.

I Love New York = GET YOUR OMICRON VARIANT HERE !

You really thanking this big jerk for practicing medicine without a license?

All of you mofos need to be served with Notice of Liability to lessen your enthusiasm for the kill shot from big pharma where the CEO is a Greek veterinary who can't even speak English properly.

Yes people, this commies are this STUPID.

Two questions that need to be asked, over and over again.

1). How can we get to herd IMMUNITY by taking an injection that the manufacturer's clearly state does not confer IMMUNITY or prevent transmission?

But is all good, CDC, FDA, Pfauci, MSM, Pfizer, Moderna they all said is OK.
It must be OK then.
Right?

WRONG! They are co-conspirators with a handful of global criminals in this scam.

@"Japan Health Ministry issues Vaccine heart warning"
Dr. Doofus ? ?is that you? So you are getting your Japanese news on YouTube now?

@"It's all about the Crooks and Idiots running the World !
Prove Me Wrong..."

You are wrong. You are a complete idiot and you aren't running anything.

@You are wrong
You're a dumb bastard aren't you?

@You are a complete idiot
You sound like a controlled TA commie idiot !

@ So you are getting your Japanese news on YouTube now? @

Said something TA commie? Or just your brain is farting as usual?

@You are wrong. You are a complete idiot and you aren't running anything.

TA Commie, try harder. Make sure you don't soil your underwear.
Mommy will be mad at you.