de Blasio's pay to play and pandemic secrets and lies 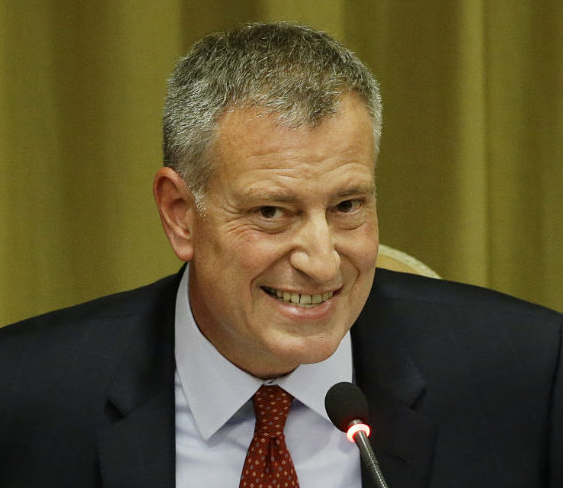 Mayor Bill de Blasio violated ethics rules twice by hitting up real estate industry players for donations to a nonprofit he created to boost pet projects, a city board found — but he got away with just warning letters.

City Hall released the two letters Wednesday from the Conflicts of Interest Board, dating from 2014 and 2018, after losing a protracted legal battle with The New York Times to shield the missives from public view.

It was a Department of Investigation report obtained by THE CITY in April 2019 that initially revealed the mayor had solicited funds from donors who had business pending with his administration.

The ethics letters concern the Campaign for One New York, a group that raised over $4 million between 2014 and 2016 to tout such initiatives as pre-K and affordable housing — and promote de Blasio himself as he sought to influence the 2016 Democratic presidential primary.

The records reveal for the first time that the conflicts board cited de Blasio just six months into his administration, in July 2014, for violating ethics rules by personally soliciting $150,000 in donations from people or entities with business before the city.

Not even seven months after receiving the 2014 warning, he kept making similar fundraising calls — asking for donations from two additional developers and James Capalino, a lobbyist who had helped buoy his campaign for mayor, according to the 2018 warning letter.

Both violations occurred after the board had advised de Blasio’s campaign lawyer just after the mayor’s January 2014 inauguration that solicitations of that nature are prohibited by the city’s charter.

The conflicts board noted in 2018 that the mayor also failed to provide a disclaimer to potential donors that their donations wouldn’t influence any city decisions.

“By soliciting these three donations from firms with business pending or about to be pending before executive agencies, and providing no disclaimers, you not only disregarded the Board’s repeated written advice, but created the very appearance of coercion and improper access to you and your staff that the Board’s advice sought to help you avoid,” the September 2018 letter says.

Despite the stern wording of the letter, it concludes that because the mayor’s nonprofit was disbanded in March 2016 — and because City Council passed legislation further regulating donations to city-affiliated nonprofits — that no discipline was warranted other than the warning.

As COVID-19 ravaged New York in March 2020, officials at the city Department of Health and Mental Hygiene began plotting out where the virus was striking hardest across the five boroughs.

A map of fatalities, broken down by ZIP code, was ready to go online in the first week of April as New York neared the expected peak of deaths, according to people familiar with the matter and to emails reviewed by THE CITY.

“I think that the reality of this scenario is we need to be transparent to the highest level,” one top health department doctor wrote in an April 5, 2020, email, two days before coronavirus fatalities reached their apex.

But City Hall did not approve public release of neighborhood-level death data until May 18. New York City saw 12,923 confirmed and 3,399 probable deaths from the coronavirus between April 5 and May 18, 2020.

The emails provide a window into Mayor Bill de Blasio’s management of pandemic information in the harrowing early weeks of the COVID crisis — a glimpse revealed at a moment when his Department of Health once again demands the trust of New Yorkers as new variants, including Omicron, spread.

On Monday, the mayor announced a broad vaccine mandate for all private-sector employees — calling the move a “pre-emptive strike” against another possible wave of infections.

“We can talk about all the other tools and we will, but vaccination is the central weapon in this war against COVID,” he said.

“It’s the one thing that has worked every single time across the board on a strategic level. It’s the reason New York City is back in so many ways.”

Nearly 35,000 New Yorkers have died of COVID-19 since the first death was confirmed in early March 2020.

When New York faced its first COVID wave that spring, longtime city health department staffers believed it was vital to release information about where people were dying — even with caveats of imperfect data and a rapidly changing situation, according to people familiar with the matter and to the emails reviewed by THE CITY.

But information languished after being approved by the health department, which couldn’t publish anything without City Hall’s OK, those familiar with the matter said.

City Hall officials, though, blamed the delay in releasing the granular fatality data on a split within the health department, where, they said, some officials contended that ZIP code-level maps could create a stigma in hard-hit communities and a false sense of safety in other neighborhoods.

At that point, the virus was surging: Hundreds of New Yorkers a day were dying of COVID-19, with 815 people succumbing on April 7 — the deadliest day for the city during the pandemic’s so far 21-month toll.

Using borough-level fatality data then available, THE CITY had revealed on April 3, 2020, that Bronx residents were dying at a rate double that of the city, spurring calls for focused help and resources. When the city’s first fatality map was finally released on May 18, 2020, it showed that COVID largely slammed poor neighborhoods hardest.

Meanwhile, Dr. Oxiris Barbot, then the health commissioner, was battling behind the scenes with de Blasio over the city’s response to the unprecedented health crisis. De Blasio also clashed frequently with then-Gov. Andrew Cuomo.

Danielle Filson, a spokesperson for de Blasio, responded to THE CITY’s inquiries with a statement:

“City Hall swiftly delivered critical information to New Yorkers, and did so with accuracy and integrity,” she said. “We led the nation in our response to the pandemic — holding daily press conferences while setting up a testing and vaccine infrastructure that has kept New York City safe.”

This is how the system works. A warning letter! Lolz!!

You might call it the Deep City, similar to the Deep State of the Feds. And it works the same way. The FBI, CIA, etc. are continually committing crimes, yet the Dept. of No Justice "declines to prosecute," right in the face of open and ADMITTED criminality.

More Lies fed to the Sheeple by the Fake News !
"White House working behind the scenes to get positive media coverage"
Well, now I know what Trump was doing wrong.

The party's over
The candles flicker and dim
You danced and dreamed through the night
It seemed to be right just being with him
Now you must wake up, all dreams must end
Take off your makeup, the party's over
It's all over, my friend

@Well, now I know what Trump was doing wrong.

They do too. Once the darling of the MSM, Oprah, Jesse Jackson, financier of the DNC
decided to run for President and took out Hilda Beast - that was his end.

Best line from his early debates when the corrupt, card carrying member of the DNC media moderator pointed out how much money he gave to the GOP.

"I gave just as much to the Democrats. When you want something done in Washington you have to give money."

@"Well, now I know what Trump was doing wrong."

Everything he did was wrong. He was the biggest clown ever to enter the White House.

Not even Mussolini deserved the Mussolini treatment the way this prick does.

Everything he did was wrong. He was the biggest clown ever to enter the White House.

@Everything he did was wrong. He was the biggest clown ever to enter the White House.@

Except he was OK when he financed your ass and your party.
If he ran on the DNC ticket he would be in his second term.
That's how full of shit you people are.
Party, party, only the party matters.
Stupid globalist tools, who sold out their soul, heart, country and everything in between.

@"Except he was OK when he financed your ass and your party."

Sorry, I don't have a party. I just dislike right wing-nut assholes.