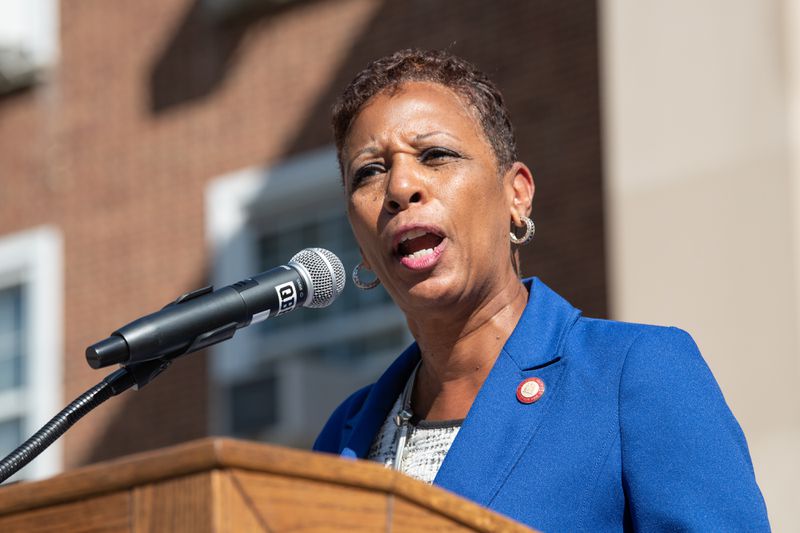 This time, she has receipts.

Queens City Councilwoman Adrienne Adams announced Friday she has secured support from a majority of her colleagues in her bid to become the Council’s next speaker — pushing her over the edge to victory days after she and rival Councilman Francisco Moya claimed they had both won the race.

Marking a major turning point in the race, Adams’ team released statements of support from 32 incoming and current members, making it all but certain that a majority of the 51-seat Council will back her in the internal speaker vote set for Jan. 5.

“I am honored to have earned the support and the trust of my colleagues to be their speaker. Our coalition reflects the best of our city,” said Adams, who’s set to become the first Black woman to ever lead the Council. “We are ready to come together to solve the enormous challenges we face in order to not just recover from COVID but to build a better, fairer city that works for everyone.”

Moya, who also represents a Queens district and has been Mayor-elect Eric Adams’ favored candidate for speaker, bowed out of the race shortly thereafter.

“At this point, it is clear that I do not have a path to victory,” Moya tweeted.

“I am convinced that Adrienne Adams will be the best choice to lead our City Council forward,” he tweeted. “Let me be the first to congratulate my good friend Adrienne Adams.”

Despite the well wishes, Adrienne Adams’ likely win diminishes the mayor-elect’s perceived influence over the Council just as he prepares to take office on Jan. 1.

A Council member, who recently received a call from a top Eric Adams adviser pushing for a Moya speakership, said the effort has also stoked a lot of anger.

“There’s been intense dishonesty coming from the mayor-elect’s people,” said the member. “The mayor-elect keeps saying, ‘I have nothing to do with this,’ but then why are your people telling us how to vote? A lot of people are starting to feel, ‘How can we ever trust this guy?’”

Everyone is Wrong About Hispanic Voting Demographic Trends..
Leftoids take them for granted. As a native Texan I could have told you this from the start. You are looking at a conservative catholic culture. Like grandma has a shrine in her living room culture. Let's Go Brandon!

It's gonna be great.

‘How can we ever trust this guy?’
If only we could ensure honest vote processors in Blue States.

She needs to build her talent stack !

When degenerates have rule over the land, we must shine LIGHT upon thier evils they commit, but even then if we do nothing, evil shall prevail. Vote these bums out !

Moya. You coulda been a contender.

She looks like a good choice.
Who is Adrienne Adams, Presumptive Next New York City Council Speaker ?
https://www.gothamgazette.com/city/10969-who-is-adrienne-adams-next-city-council-speaker

Sounds like a bit of the old days of the USSR with Trotskyites vs Stalinists.
No matter what faction of Commiecrats prevails the city loses.

Everyone used to lump blacks and Latinos into the same bucket...not anymore

She reminds me of Winsome Sears.

These cradle-to-grave crazycrats only do what they are told (in order to get on the city/state defined pension gravy train for life); they never change anything except for more of the same PRIVATE SPLENDOR for themselves, versus PUBLIC SQUALOR for which everyone else continually pays a soul-crushing price. They read from the same ancient playbook that causes government tyranny, vigilantism and anarchy for everyone else. Can't you see that nothing ever changes—— because nothing ever changes? For ALL of the comments on this blog site, no one seems to notice, much less understand, that the repeated angst and inaction to challenge corrupt authority only pits one comment against another——and often for off topic hostility, misdirected hostility and attacks that solve nothing!

It's time for QUEENS Crap to do something different (instead of posting the same unaccountable leadership complaints without a corrective course of action like activism, protest, rally and resistance), otherwise it's the same definition of insanity: Doing the same thing, over and over again——and expecting a different result!

It's the ruling class, peasants and paupers——ALWAYS the ruling class who makes the decisions that enslave modern day society by controlling the purse strings that turned flag and country into a socialist disease of epic government, humanitarian, ecological, fiscal and spiritual fail. And the public be damned!