Drawing settlement cash from a gravestone 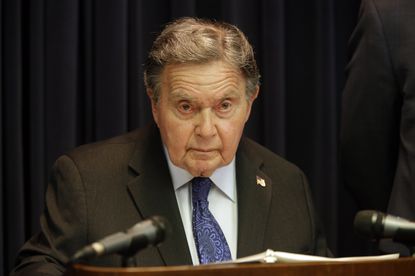 The ghost of Queens District Attorney Richard Brown has cost city taxpayers $17.25 million in the past five months.

The money is being paid to settle three lawsuits alleging prosecutorial misconduct during Brown’s tenure leading the office from 1991 to his death in 2019 — and comes amid growing scrutiny of some New York prosecutors’ pursuit of criminal convictions at all costs.

Brown seems to have been aware of his office’s alleged misconduct, which imprisoned people for years for crimes they were later found not to have committed.

At one point, Brown wrote to a top aide, Jack Ryan: “Jack, I think we’ve been getting away with this sort of thing for a long time.”

That quote comes from a document uncovered by Joel Rudin, a lawyer who represents the three men who won the $17.25 million in legal settlements.

“The issue has been percolating for many years and is suddenly capturing public attention more than it ever has before,” said Bennett Gershman, a Pace University law professor who has studied prosecutorial misconduct for nearly 40 years.

The latest previously undisclosed settlement involving the Queens DA’s office was for Kareem Bellamy, who in July reached an $8 million settlement in a lawsuit that claimed he was wrongly arrested for a 1994 murder and sent to prison for 14 years.

Bellamy’s suit alleged that Queens prosecutors withheld key evidence in the case that might have led a jury to exonerate him.

And late in November, school custodian Julio Negron settled for $6.25 million after he was convicted of a 2005 shooting and spent 10 years behind bars. He alleged Queens prosecutors withheld evidence that would have pointed to another suspect.

Increased scrutiny of city district attorneys’ offices has come from a group of law professors, who are trying to use the state’s courts grievance committees to highlight prosecutorial misconduct cases. The professors are fighting an uphill battle.

The group has filed complaints against 21 current and former Queens prosecutors. The city Law Department countered with a complaint to the grievance committees that says by going public with their complaints about prosecutors, the professors are “misus[ing] and indeed abus[ing] the grievance process to promote a political agenda” in a way that “should not be countenanced.”

There is no shortage of real criminals, yet the "justice" system continues to railroad others falsely. Are they just too incompetent to do their jobs?

Brown played the numbers game like no one ever did. His office was unsurpassed in encouraging NYPD to fabricate "Evidence" and plea bargaining down to misdemeanor offenses in order to show a high "Conviction" rate. I'd be willing to wager we're only seeing the tip of this particular iceberg.

@Brown played the numbers game like no one ever did. His office was unsurpassed in encouraging NYPD to fabricate "Evidence" and plea bargaining down to misdemeanor offenses in order to show a high "Conviction" rate. I'd be willing to wager we're only seeing the tip of this particular iceberg.@

Callous is more like it. You see they are not interested in justice, they are interested in numbers, sending mostly minorities (they pretend to care about) to the prison industrial complex.
Corruption to the bone marrow.

Stray dogs should be taken to his grave so that they may relieve themselves in an appropriate place.

Vindicating the Founders: Race, Sex, Class, and Justice in the Origins of America
Thomas G. West