The Blaz allocates 40 million dollars for his backyard park 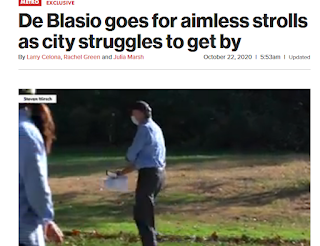 The Prospect Park Alliance and Mayor Bill de Blasio are announcing today that the city will allocate $40 million in the city budget to Prospect Park. This is the largest single allocation of funding from the city in the park's history and will be used to make much-needed upgrades and restorations in its northeast corner, known as the Vale.

“Prospect Park is Brooklyn’s backyard,” Mayor Bill de Blasio said in a statement to Gothamist. “It’s where I got married and raised my family, and where New Yorkers of all backgrounds come to spend time in nature. This historic $40 million in funding will ensure the Vale is restored to its full glory.”

The Vale covers 27-acres and is located in the park’s northeastern edge bordering on Flatbush Avenue. Once construction begins, the hope is they won't have to close off the entire area. And while the work will not be completed until 2025 at the earliest, the planning has already begun.

There will be a restoration of the Children's Pool in the Lower Vale, a landmarked landscape built in the 1890s that has since fallen into a state of disrepair. And the Upper Vale (which was formerly the Rose Garden) will include three major new landscapes: a sensory garden/rustic arbor, a nature play area, and a combined amphitheater and community building.

So now all the drug users can flock to there instead. It'll be the Hilton of all the parks....every drug users fantasy.

This ain’t so bad. At least it’s going to be used for something useful.

What will Flushing Meadows get ?

No it's not. It's a park. Your backyard doesn't have roving gangs of thugs in it. I hate stupid Liberal speak.

“It’s where I got married and raised my family"

First, you didn't "raise your family" in Prospect Park unless you were homeless. As a life-long government grifter, you've lived off the public teat for decades, accomplishing nothing other than chaos and ruin, but it gave you a house where you actually raised your family of crackpot children.

Why does every liberal always have to throw in "of all backgrounds." Diversity uber alles! Hey Dumblazio, saying "all New Yorkers" would mean the same thing, but as always, you have to deliberately point out racial divisions.

This historic $40 million in funding will ensure the Vale is restored to its full glory.”

Restored? Restored? You were Mayor for seven years. Why did it fall into ruin in the first place? Oh yeah, you and your husband Sir Laine were too busy stealing money, increasing racial tension, letting crime skyrocket and destroying small businesses. No time to fix your "backyard."

While the rest of the parks in Queens go to crap.

Putting money into a park instead of paving over it for much needed parking spaces? This is a sure sign that he's a communist.

“It’s where I got married and raised my family,"

This isn't nearly as bad as the jackass governor handing the airline some 500 million of federal infrastructure funds to replace the main terminal at JFK.
Our streets should COME FIRST not some building to welcome every 3rd world piece of shit dropping anchor here.
That federal infrastructure money is intended for public improvements, not American airlines, Arab Emirates, Air China, Richard Branson etc.
Too add, there is nothing wrong with that terminal its just a friggan building with some chairs, bars and fast food (all privately owned)
Our dam streets are like driving in willets point triangle or on the moon, bridges, falling, train trestles losing nuts & bolts. Yet, NO WORK IN PROGRESS, NOT ONE STREET BEING REPAVED as this stupid bitch blows $500 million on private special airline industry interest.
Whos paying for my cars $2500 repair for ball joint, tie rod, shocks, CV joint, control arm bushings, 6th wheel alignment thanks to these fucking streets ?

Only if your parents took the advice...

This is a sure sign that he's a communist.

The TA Troll is annoying !
Can someone help with his/her frustration and anger.
Buy a Yugo for him. The perfect Commie shit car.

Any chance for you getting the Pfauci shot? Maybe a few extra boosters?

Isn't that where he did a stealth drug run involving a helicopter or some shit.
No flight plan, landing safety nothing. Was supposed to be an investigation but nobody's heard a peep further about it.

Buy a Yugo for him.

no need, he can keep his bike ydanis will fix his problem via poles, spikes and who knows what

for backup option a good e-car will do. they self ignite at times. the car is environmentally friendly otherwise, only the smoke form the ensuing fire is not.
still burns a lot of useless plastic and those lithium batteries cannot be recycled properly.

"The TA Commie Troll is annoying"
Yep like a ingrown toe nail with fungus.