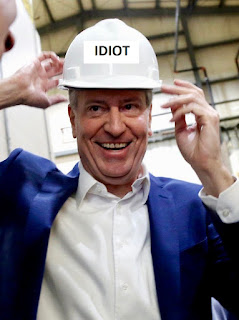 On Wednesday morning, opponents fighting the East Side Coastal Resiliency project cheered as their attorney obtained a stay blocking further work on the contentious project.

The day before, though, park activists had watched in horror as workers either cut or “dismembered” 13 trees in East River Park, felling some completely while shearing the branches off others, leaving them ghostly, ruined trunks.

Early Wednesday morning, the workers were right back at it, lopping the branches off of six-more adult trees, a combination of London planes and locust trees, that the Parks Department has likely earmarked to be made into planks for park benches.

But around 9:30 a.m., Judge Rowan D. Wilson of the state’s highest court, the Court of Appeals, granted a stay on the lifting of a restraining order against the work by the Appellate Division, First Department, from Nov. 30, when the lower court had ruled against a community lawsuit against the project.

About five hours later, at 11:30 a.m., protesters clashed with police at the new fence blocking off the work zone in a wild video posted to Twitter. Police are seen trying to close the gate while shoving away a swarm of protesters.

Around 8:30 a.m. an incredulous Tommy Loeb, a member of East River Park ACTION, who could see the destruction playing out from his windows, fumed, “They’re in contempt of court!”

Kathryn Freed, a former judge who is a co-counsel on the community lawsuit against the East Side Coastal Resiliency project, said Mayor de Blasio’s Law Department unilaterally decided there is no stay in effect to stop them from destroying the park.

Basically, as she explained it, the Court of Appeals itself cannot issue a stay, although, this Wednesday, it did stay the actual previous decision from Nov. 30 by the Appellate Division (a lower court) against the community lawsuit.

Friday morning, Freed and her co-counsel Arthur Schwartz, who are doing the case pro bono, were scrambling to have the Appellate Division clarify that its Nov. 30 decision against the lawsuit has been stayed by the Court of Appeals — which would mean a temporary restraining order (T.R.O.) that the Appellate Division had issued while it considered the case should still be in effect, the attorneys argue. Freed said they hoped to be in court at 9:30, virtually, to get a clarification.

She said a city attorney had called Schwartz at 6 p.m. the previous day to say the workers would be restarting the tree-cutting.

While the legal technicalities are confusing, the reality of trees being cut in the park once again on Friday was starkly clear.

Yes I know "it's not a Queens story", but this is a dangerous precedent the Blaz is setting here. Imagine if Eric Adams can cite what's going here to do something to Forest Park, Flushing Meadows or your local playground. Hell just imagine if Adams can do anything on a whim in spite of a court order.

Re "it's not a Queens story"

More complaints like that and you and others that complain of my postings will go wanting.

Sorry this was too extreme to ignore. But tune in tomorrow for an update of a Queens Crap classic.

Thanks JQ! Yes, not Queens but you’re absolutely correct this sets a terrible precedent and can happen to any park in the city.

I think most of your readers will be very happy with this. Trees being chopped down!!! This
gives right-wing-nuts an orgasm. For once, they'll be happy with De Blazio, if they can ever be happy at all.

People in Queens NEED to know what is going on elsewhere. Their pols like to make them barefoot pregnant and in the kitchen while they trade info with each other all the time.iey

@ "For once, they'll be happy"
Only when you stop posting Commie BS will we be happy !

Feel free to tune in to any other site.
Nothing wrong with the posts and I couldn't give two fucks what gives you a headache.

@This gives right-wing-nuts an orgasm.

Man, your bike's components are getting an orgasm?
Talk about sick sick sick.

@KT and @Anons re: queens stories

Thanks a lot, and I should point out to More Queens stories where were you when crappy was running this blog posting crap from the other 4 boroughs? Deal with it.