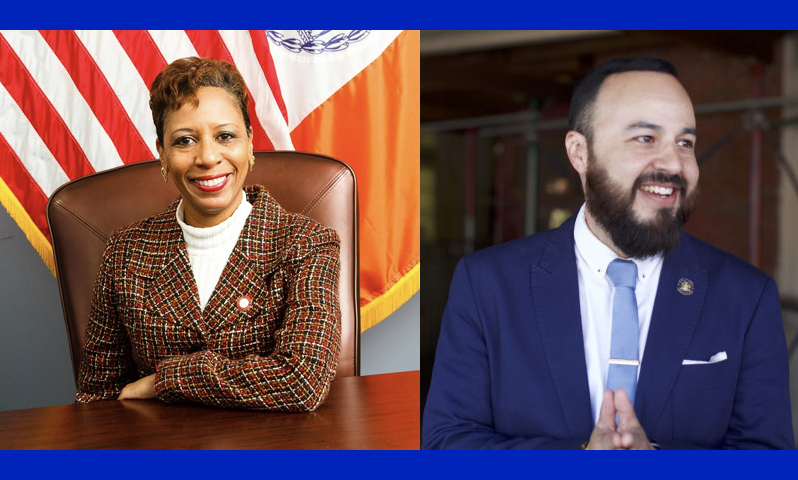 The official vote for the next City Council speaker won’t happen until January, but that didn’t stop Queens’ Adrienne Adams and Francisco Moya from declaring victory anyway on Tuesday.

Of course, they both can’t be speaker — but the two Queens reps think they’ve drummed up enough pledged support among their colleagues to win the powerful spot when the new City Council assembles next month.

Four of the remaining candidates put their support behind Council Member Adams to lead the City Council beginning in January and produced supportive quotes in an Adams press release early Tuesday afternoon.

“Today is a historic day for New York City. After much discussion and collaboration with my colleagues, I am honored to have received the necessary votes to become the next Speaker of the New York City Council,” Adams said. “The incoming City Council will be beautifully diverse and wonderfully collaborative in so many ways. As Speaker, I look forward to being a partner with every Member to help advance the needs of our communities. As a Member of the Council, I will always prioritize my colleagues, labor, and the people of New York and have an open door to every voice.”

A lifelong resident of Southeast Queens, the 61-year-old Adams was raised in Hollis and was elected to the Council in November 2017, becoming the first woman elected to represent District 28, which covers the neighborhoods of Jamaica, Rochdale Village, Richmond Hill, and South Ozone Park. She was a classmate of Mayor-elect Eric Adams at Bayside High School, but he reportedly has been pushing for Moya as the next Speaker.

That must have come as news to Moya, who also said Tuesday that he believes he’s going to be the next Speaker.

“I am humbled to announce that our diverse coalition of Council Members and leaders from across New York City has collected a majority of votes to elect the next speaker of the Council,” Moya said in a statement. “I look forward to leading this body into a brighter future for our great city.”

What? This is new? You're ALL being played when you continue to reinforce the puppet-stooges in fake power, whose veneers are all about representation of We, the People, merely by WORDS only, never DEEDS!

What representation? Where? When? How? As long as the plebeians, proletariat and rank-and-file 'Useful Idiots' continually worship at the neo-feudal alters of bonded slavery (they're NOT voting booths, trust me, it's enslavement for life - with YOUR blessing!), then the longer that the masses will be socially engineered to hasten their own demise.

Such a laughable crime against humanity, every time that I hear about (but never actually SEE!) all of this psychobabble talk of transparency and accountability that I have never seen, since sliding down the birth canal - and, that's exactly how I will leave this filthy world without the illusions of any and all politicians (not public servants!), all of whom worship at the alter of their all consuming oligarchs. Once they break the cycle (never gonna happen) and start giving the people what they rightfully, CONSTITUTIONALLY, expect, insist upon, demand and pay for (from their starvation wages paychecks that have never kept pace with ever climbing inflation), then it's political suicide for the de facto public servant and openly contemptible impostor du jour.

That's how it works, QUEENS land serfs, that's WHY it doesn't work - but, guaranteed you'll be working forever and a day - exactly the way that this elitist, neo-feudal, neo-fascist, neo-liberal, neo-Bolshevist, intolerant extremist system was designed to fail it's ever languishing subjects, flag and country, all of which devalues honesty itself, with a vengeful impunity that remains unprecedented, to date. And, the public be damned.

Stop birthing your obsolete monsters of great arrogance and intense incompetence that foster and reinforce new heights of societal sadism, the likes of which even the Marquis de Sade himself has never known!

No Nose Rings said...
​No matter what you think if you cant SEEE the corruption NOW then your not alive !
Prove me wrong....

"I am humbled to announce that our diverse coalition of Council Members and leaders from across New York City has collected a majority of votes to elect the next speaker of the Council,” Moya said in a statement. “I look forward to leading this body into a brighter future for our great city.”

Yay! Diversity! Now Prog idiots of all colors and backgrounds can come together and bury the remains of NYC. THAT is the brighter future for a ONCE great city.

Adrienne, you got my vote, honey.