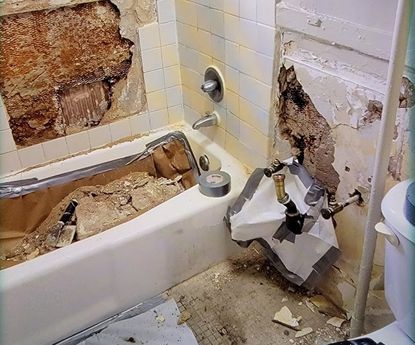 Fed-up tenants of the Queensbridge Houses sued the New York City Housing Authority on Tuesday, citing hazardous conditions in the nation’s largest public housing complex and what they describe as illegal harassment.

Pamela Wheeler, 72, and Marilyn Keller, 58, are among 11 plaintiffs named in two lawsuits — one representing residents of the complex’s northern section, the other representing its southern section — filed in Queens Housing Court.

The suits come after years — and for some residents, decades — of complaints about quality-of-life issues in their homes, including asbestos, lead, mold, severe leaking and flooding, vermin, and other biohazards.

“I am tired of living with mice, roaches, waterbugs, lack of heat, holes in my walls and sink, waterlogged and rotting cabinets, and many more repair issues that are a threat to my health and safety and an affront to my dignity,” said Wheeler at a press conference.

Her calls to NYCHA rarely, if ever, result in action, Keller says.

“Any type of repairs that need to be done in my house — I have to wait forever to get them done,” said Keller. “I put the ticket in. Then NYCHA calls me back to tell me the date they are coming.

“So, I prepare for the appointment, take everything out of the closet and cabinets, and ask for the day off work. But then they never come. They are a bunch of no-shows.”

The plaintiffs further allege the city’s trouble-plagued housing authority declines to make repairs in the hope that the Queensbridge Houses can be handed over to “private entities who would receive federal money in exchange for their agreement to keep the units affordable” under federal housing regulations and laws.

The “private entities” could be for-profit companies, or new government entities, the lawsuit says. In any case, the lawsuit says, it’s not clear that handing the project to new public or private managers “will benefit low-income renters more than it will harm them.”

So they don't care much about the new basketball court de Blasio's NYPD built there?

The left and liberals would have everyone living in huts if they could.

How did Trump cause this ?

But yet they can afford to buy their children yeezy sneakers and iPhones and bail their criminal adult children out of jail (when there was actually cash bail) but they couldn't take care of their own FREE housing? I understand those who have disabilities and children with disabilities but if youre able to work, then you shouldn't be living in public housing.

Looks like someone got a sledge hammer to the place. This must be De Blasio's fault.

Sheeple it's a class war !

“if youre able to work, then you shouldn't be living in public housing.“

Do you know that there are some city employees that make $30k? Where can a person rent in NYC on that salary? People making $15/hr at target…they’re working. Where should they live?

If a person is able to work they should be paid a wage that they can use to pay for their housing.

"If a person is able to work they should be paid a wage that they can use to pay for their housing"
You have no clue about economics or life ! Grow up dummy and read a few books...

I do not feel sorry for anyone living in NYCHA ever. They pay 15% of their income for rent, while the rest of us pay over 80% of our monthly income for rent. But I don't want to live among gang bangers, drug dealers and violent criminals. I do not want to get shot to death.

Who’s paying for the lawyers?

Regarding White privilege and Black subjugation.....there was a 19th century plan in America to replace Black labor with Chinese labor. Land of the free?
We were and are colonists!