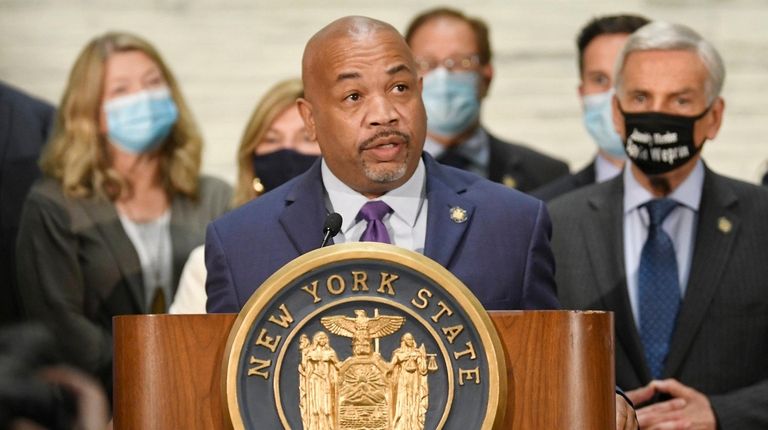 Heastie (D-Bronx), in an interview with Newsday, said an Assembly investigation found "credible evidence" against Cuomo and likely would have resulted in impeachment charges.

But the primary purpose of the impeachment proceeding was to determine whether the governor should stay in office following sexual harassment claims and other allegations regarding actions that Cuomo took during the pandemic, Heastie said.

The governor’s decision to step down, announced Tuesday, effectively makes the question moot. Cuomo's resignation is to take effect Aug. 24.

Heastie said another driver in the decision to "suspend" proceedings is that the state constitution doesn’t clearly "authorize the Legislature to impeach and remove an elected official who is no longer in office."

"We don’t believe we do" have the authority to continue once Cuomo departs, Heastie said. The speaker added that he understood and agreed with Cuomo accusers who say the governor should be held accountable, but impeachment wouldn’t be an available avenue once the governor leaves.

Legislators would not have finished their investigation before Aug. 24.

Instead, the Assembly will do the "next best thing": turning over its evidence to various law enforcement agencies investigating Cuomo, Heastie said.

The attorney general has been looking into Cuomo’s $5.1 million book deal, Heastie noted. The U.S. Justice Department is investigating the nursing home data. And prosecutors in five counties, including Nassau, have said they are looking into alleged sexual harassment incidents.

Because of those other ongoing investigations, the Assembly won’t make the evidence publicly available at this time, a Heastie spokesman said.

Cuomo will be gone but nothing will fundamentally change.

Democrats are lowering themselves to the same level as Republicans. Republicans have already set the bar very low.

And, now the latest (in a series of egregious, New York State government transgressions) from crony blubberhead, Carl Heastie and the self-imploding DemonRat SCOURGES of epic government fail:

So, if anyone STILL isn't 'White Hot' with anger over this latest public scam, then you deserve pity for your staggering complicity which reinforces more brazen levels of corruption to prevail. Why would anyone in publicly elected office get to CHOOSE what happens to them after serious charges of misconduct and sexual molestation have already been leveled and proven? How about a ZERO tolerance policy for top tier government resignations in the wake of serious violations that call for impeachment, followed by instant impeachment proceedings themselves by an order of immediate, 'step down' edict as a safety net to protect We, the People from further harm and profound government waste? So, the disgraced victimizer gets to skulk around the untouchable corridors of the Executive Chamber of Horrors for another lethally dangerous two weeks——to do WHAT exactly?——and, more importantly——WHY?

Who the hell does this 'Ugly Beastie-Heastie-Heifer' coward think he is? We, the People ARE GOVERNMENT! Freedoms and democracy are OURS to employ and demand! No publicly caught abuser deserves a government pension——LEAST OF ALL the shamefully soiled governor himself!——and if this arrogant coward and public payroll hustler gets to keep a pension that ironically isn't offered to any of his ever languishing constituency, then all bloody pandemonium should break out with an imploding vengeance!

In closing, I don't hold any trust for EITHER of the two-party-machine-failed duopoly diseased Republican parties (one that salutes their unwavering allegiance to ACTUAL blood-red scripts of exaltation and exclusion; the OTHER taking form as a right of center Republican Party-loyalist dupe, draped in the DemonRat, 'Tidy Bowl' flushing color blue (that transparently embrace neo-feudalism, neo-fascism, neo-Bolshevism and neo-liberalism), with a vengeful impunity that remains unprecedented, to date (EMPHASIS ADDED).

But if We, the People take this one on the chin, and look the other way on this travesty of fiscal injustice, then brace yourself to be at the endless mercy to continually pay for the political sins of an entirely false, fake and failed, CULT-PARTY system of indoctrination-innoculation apathy and unrivaled indifference that will never stop bleeding (hemorrhaging) the rank and file――until the DOA cadaver known as New York State government will leave nothing but the bones and marrow for the bottom feeding buzzards to finish off.

Are New York residents REALLY satisfied with paying the lifetime pension contributions to a disgraced, bloodsucking maggot like CUOMO, and his dynastic CRIME WAVE family of parasitic worthlessness? Likewise, for the mangy sewer rat that infected City Hall, Bill de Blasio (who should have been impeached RIGHT AFTER he accepted hefty bribes a few years ago that resulted in jail sentences ONLY for those who MADE the bribes; not the one who ACCEPTED THEM). This is how revolutions commence!

❝The further a society drifts from the truth, the more it will hate those who speak it.❞ ——George Orwell (1903-1950)

The best of the best brought to you by the CCP.
Now for the topic, Cuomo resigned, what impeachment? Trump's term expired and then they wanted to impeach him?
These people are not normal regardless of their party affiliation.
They are paid for and bought by ... political hacks.
Long live Uncle George!

You bet they wont pursue because those women wont testify under oath or be worthless. I hate Cuomo and his non stop attacks on the 2bd amendment, the NRA and my rights however Cuomo did nothing wrong. This Attorney general feminist baton twirler and lynch mob know they have NOTHING !!

This is a very bad precedent.
Any straight male showing his appreciation of woman, their clothing, sex appeal, gives a complement or Merry Christmas/Happy New Year kiss could be accused of the same thing.
Look on TV when the Times Square ball drops on New Years at all those people, STRANGERS kissing & hugging. How about millions of people rubbing Buddha belly for good luck, wealth and prosperity? Do we make all these customs illegal now to appease a couple feminist bitches, worse feminist separatist lesbians, and radical Bella Abzug types who hate men and want to takeover everything and tell us how to wipe our ass (and what with) ?
Fuuuuuggg no !!

Cuomo should demand impeachment charges, he would win !!!

I’m sure the newly woke right-wingers will be upset.

Anonymous said...
Democrats are lowering themselves to the same level as Republicans. Republicans have already set the bar very low.

So ass backwards. It's ALWAYS the Commiecrats who lower the bar-see Bill Clinton. But then the Banana Republicans do nothing about it so they both suck.

Democrats are lowering themselves to the same level as snakes !

Keep faith and speak the truth. That’s all we can do now to resist the way of the world.

If Trump farted in a flower shop, they would have demanded he be impeached.
Kill 15,000 no problem...

Blubberhead, Carl Heastie is a fine example of the Peter Principal !
Just wait and see, Eric will face the same outcome just with a slimmed down veggie head.