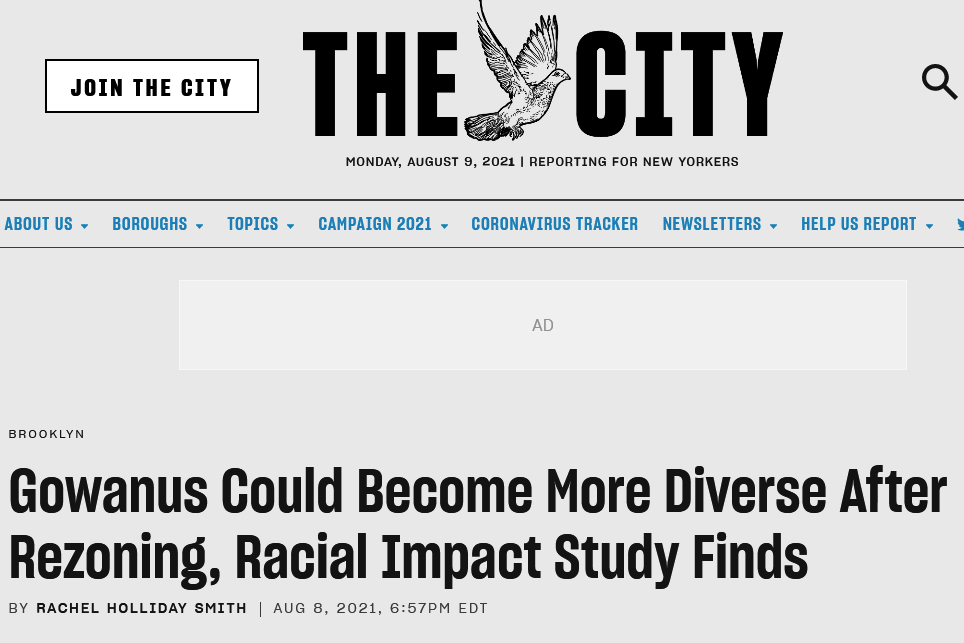 Brooklyn’s Gowanus neighborhood would likely become more diverse and less segregated under a proposal to allow more development in the neighborhood, according to a first-of-its-kind study on the contentious rezoning’s potential racial impact.

The analysis of the Gowanus Neighborhood Plan, conducted by a Columbia University professor with City Council staff, comes as the controversial proposal — previously delayed for months by a lawsuit — now makes its way through the city’s public review process.

The study also offers the first glimpse at the potential value of a Council bill passed just weeks ago requiring “racial equity reports on housing and opportunity” for rezonings in the future.

While that legislation will not take effect until mid-2022 and does not apply to the Gowanus plan, those backing the rezoning thought it was best to study the issue anyway. Those supporters include area Councilmembers Brad Lander and Steven Levin as well as the local housing nonprofit Fifth Avenue Committee, which helped fund the study.

“If our goal is a more inclusive neighborhood, with meaningful opportunities for New Yorkers of color, then we need to find the courage to move forward thoughtfully. And I really believe this provides clarity about that,” Lander said of the new research.

The Gowanus plan aims to change development rules within an 82-block area along Fourth Avenue between Atlantic Avenue and 15th Street and stretching west to Bond and Smith streets.

The city’s rezoning of Gowanus, Brooklyn, which some groups tried to sue to stop, would likely make the neighborhood more diverse and less segregated, a new report found.

The report, conducted by Columbia University and New York City Council staff, found that the rezoning calls for 35 percent of the nearly 8,000 new housing units to be set aside for affordable housing, a much greater share than in other recent rezonings.

The nearly 3,000 affordable housing units would be offered to families making between $30,000 to $100,000, or 40 to 80 percent of the area median income, and would help Gowanus “much more closely match the diversity of New York City rather than the population of the local area — a neighborhood that is significantly whiter and wealthier than the City as a whole,” according to the report.

It estimates that 20 to 25 percent of the new housing would be rented by Black families and 25 to 37 percent by Latino families.

“The report shows that in recent decades, Gowanus and surrounding neighborhoods have grown increasingly exclusionary, causing displacement of many lower-income residents of color, and becoming one of the whitest and wealthiest communities in the city,” Council Member Brad Lander, who represents the neighborhood, said in a statement. “We can share it better.”

Landers and others touted the report as one of the first racial-impact studies done for a rezoning, which will soon be required by city law, and as showing the benefit of including them for future plans.

“We hope this report can help change the conversation around the racial impact of rezonings as we work to overcome decades of segregated growth in New York City,” Freeman added.

Brad Lander is all over this study, it wasn't long ago when he was spewing this racial inclusivity and equity drivel when he was blubbering during those zoom calls advocating for Cojo's disastrous and universally rejected Planning Together. Come on man

This is what they had in mind when they derailed the Amazon idea at LIC.

Things will eventually catch up with Mystery Man Gianaris who will be (if trends continue in Little Egypt formally Vallonia) replaced by an ethnic (as opposed to an ersatz) socialist.

Keep a community an ethnic Democratic stronghold at all costs: the guiding principle on all NYC housing policies.

"and becoming one of the whitest and wealthiest communities in the city,” Council Member Brad Lander.."

And safest and most livable too.

Anyway, Lander has to catch up with reality. As the area gets whiter, it's gets MORE woke and votes D more than ever, so he should be happy.