Restaurants, bars and indoor venues may face up to $5,000 fines if they don't require patrons to show proof of vaccination, under an executive order by Mayor Bill de Blasio announced Monday.

All indoor venues will have to check that everyone age 12 and up who enters their premises shows proof of vaccination, under de Blasio’s edict. That proof must match the information on their official identification document, which they must also show.

Enforcement will begin Sept. 13. After that, violations will incur penalties of at least $1,000, which will rise to at least $2,000 for a second violation and at least $5,000 for a third. The city will send out inspectors from various agencies to check compliance.

Between now and the enforcement date, the city has said it will send out 570 canvassers to all businesses in the city to help them understand the plan. Venues must all put up a sign communicating the vaccination requirement.

Some venues were surprised to see themselves included on this list, which the mayor had not previously detailed beyond mentioning "indoor entertainment venues."

"I am extraordinarily hesitant to instruct my staff to do this," said Eli Klein, owner of the Eli Klein Gallery in the far West Village, noting that he would not have known the mandate applied to his business if he had not tuned into the mayor's announcement this morning. 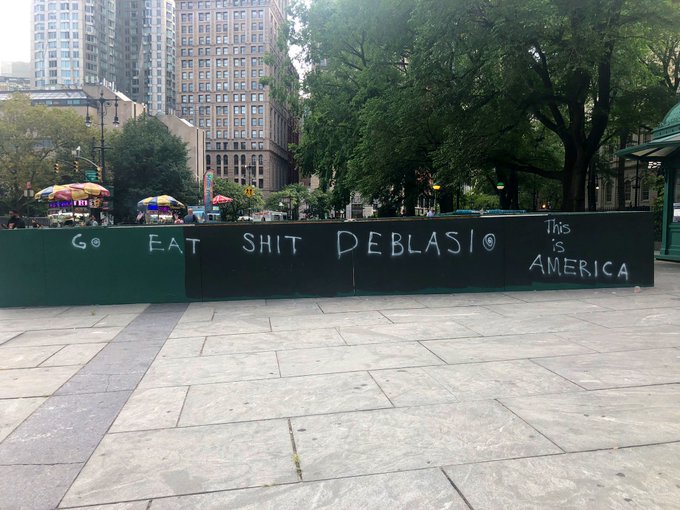 Will the Homeless Men who hang out in the streets all day and harass people for money be required to show proof of vaccination, or will they be given a free pass like the illegal immigrants?

Deblasio is really good at destroying small businesses in NYC.

But he is even better at providing hotels and shelters for homeless drug addicts and sex predators.

Biden, "you'll need planes and nukes to take on the American government"

Its funny how Sheeple were so n the dark they didnt see this happening.

Never Despair. That is a motto for you and me. All are not dead; and where there is a spark of patriotic fire, we will rekindle it."
― Samuel Adams

Forget The Taliban—Anti-Maskers Are The Real Terrorists!

Has debosio or anybody else asked Jill Biden what to do? She is a doctor, afterall.

Given the widespread availability of
The Jab
Why should anybody be concerned about unvaccinated people?
If vaccination works, who cares?

All restaurant owners should show some backbone and shut down for a day.

If they are "phasing out" the pcr test because it couldn't tell the difference between influenza and covid, how do they know that there is a delta variant? Does anyone know?

And as I've been saying for almost 2 years now this is how freedom dies.

"If a law is unjust, a man is not only right to disobey it, he is obligated to do so."

Alex Joones said...
"Compliance operation"... They're not even hiding it anymore.

One step short of them going full CCP and welding people's doors shut.

Sheeple Could this be like the "Fake" Nazi Typhus Epidemic ?

"If vaccination works, who cares?"

Vax does not work.

It’s obvious this isn’t about health policy anymore. Liberals allow illegals into this country with no id and even if they have Covid. This is pure tyranny and using small business as a cudgel. To the liberals who support this Nazism, may U rot in helll.

"Anonymous said...
Has debosio or anybody else asked Jill Biden what to do? She is a doctor, afterall."

She is a doctor as are all who get a PhD. Not a Doctor of medicine. Sorry if this is too difficult for a Fox News Sheeple to understand.

All restaurant owners should show some backbone and shut down for a day. "

All un-vaccinated should also show some backbone and stay at home for the next six months.

@"Anonymous said...
Forget The Taliban—Anti-Maskers Are The Real Terrorists!"

The Taliban are just Afghani conservatives. Hope the people of Kabul get to enjoy life under a "conservative" regime.

Anonymous said...
Given the widespread availability of
The Jab
Why should anybody be concerned about unvaccinated people?
If vaccination works, who cares?

EDUCATE YOURSELF. A person who is vaccinated can still get the variant and get sick, maybe not hospitalized, but still sick as I was. Not to mention hospitals being flooded with the unvaccinated who get sick and take up space in IC Units. And what happens to someone who has a heart attack and the IC unit is filled to capacity with asshole unvaccinated folks.

God bless American Constitution! The only only that recognizes Individual Rights.

@“ Anonymous said...
All restaurant owners should show some backbone and shut down for a day.”
They should do like the Trump hotels, and impose a mask mandate.

Moe said...
The end goal is one party rule. We're creeping towards authoritarianism, although the creep gets faster each day.

@"TRY THINKING BEFORE SPEAKING" Are you my Dr ?
My body my choice !

We need more people like Desantis in Florida standing up for the American people.

@TheSheeple said...
The media and Fauci infected you. Wake up!!

So blm riots, lollapalooza in Chicago, and Oboma's b-day are all perfectly fine ?

Does ivermectin/ HCQ work ? So many people with medical knowlege here

Did Dr. Falssy help the Chinese develop the sickness ?

16 people shot in NYC Sunday night and our Mayor wants to jail people if they have forged vaccine credentials. Wow. Just wow.

So in Queens let’s be realistic there is a good chance in the restaurants that some workers don’t have papers to legally work or live in United States yet they will be asking me for my papers to enter their restaurant!! Something is really wrong with this picture

@"Anonymous said...
Being on the side of allowing people to making their own decisions when it comes to their personal health is now “anti-vax” ��"

People can make their own decisions. If they choose not to vax fine. Just stay away from indoor restaurants, bars, clubs, etc. Wear a mask in crowded places. Stop whining like a big baby.

Communism is the end goal. Right now the 2nd Amendment is stopping them here from a full blown takeover like in Australia and New Zealand.

"She is a doctor as are all who get a PhD"

@Anti-Maskers Are The Real Terrorists!

Actually you are the real terrorist of the worst kind, a communist terrorist.
Get lost jerk.

I have a confession to make to JQ and the readers here on Queens Crap !
I shit post here sometimes and it's not right to troll too.
From now on I will just tell you to Fuck Off if that's good with you Marxist Pigs !

If you don't want to get the vaccine, fine. Learn to cook. Your big fat ass may get smaller.

@"Anonymous said...
We need more people like Desantis in Florida standing up for the American people."

I do admire your sense of humor.

This is 100% discrimination. New York City is a dystopian authoritarian hellhole.

A commie raised by commies. That's why he changed his name.

Getting dark fellas. Crazy how the Dems can’t see how authoritarian they’ve become. And twisted how they rationalize it in their minds like they’re morally righteous.

Escape from Ney York was once just a movie, now it's a reality show.

If you want to be 100 % protected, wear a mask; double secure wear two masks; triple protection, three masks; and if you don’t want to worry about the virus anymore, just wear a plastic mask.

In 2007, she received a Doctor of Education (Ed.D.) in educational leadership from the University of Delaware. per https://www.whitehouse.gov/administration/dr-jill-biden/

Most American people will never knowingly adopt Socialism. But, under the name of 'Liberalism', they will adopt every fragment of the Socialist program until one day America will be a Socialist nation, without knowing how it happened.

These "Leftist" people are sickeningly ignorant.

I haven't been vaxxed, had covid early this year before the vax was available. It was less than a mild sinus infection. So I know my body can handle it. What I don't know is how my system will handle the vax. If you want the shot, go get it, its your choice. Eat healthy, exercise, and get some sun. Good luck .

When people FINALLY wake up and see the "Democrats" for what they really are-domestic terrorists clearly bent on destroying this nation-then and ONLY then will there be any hope.

Anonymous said...
It’s obvious this isn’t about health policy anymore. Liberals allow illegals into this country with no id and even if they have Covid. This is pure tyranny and using small business as a cudgel. To the liberals who support this Nazism, may U rot in helll.

Preach on brother. Preach on!

Hatchet attacks! And this mayor wants to fine businesses! Worst mayor ever!!!!!!! This guy and his administration have destroyed the city of New York. He and the city council should be held accountable in court!

I see that Fox News is mandating it’s employees to reveal their vaccination status. I’m sure Tucker and the gang will revolt and fight this tyranny. Lumpy Hannity will lead the charge. Freeeedom!

If I want to eat in a restaurant and I am unvaccinated, that is a crime.

DeBlasio downplays the mentally ill sick man who took a hatchet and tried to kill a man at an ATM in a bank in the financial district and he downplays the attack.

Really has NYC crime and priorities all backwards!!

"Anonymous said...
It’s obvious this isn’t about health policy anymore. Liberals allow illegals into this country with no id and even if they have Covid. This is pure tyranny and using small business as a cudgel. To the liberals who support this Nazism, may U rot in helll."

I wonder how the Soup Nazi would enforce this mandate?

"These "Leftist" people are sickeningly ignorant"
They are Brother and will never give up telling you how to live. Fuck them !

Stop eating in those rat infested restaurants. It's so simple. Just cook for yourself. That's if the NYC Commies will allow you to buy food!

Your rights end where my nose and mouth breathe your COVID infection!
You have the right to die in peace BUT not to give me COVID.
Capersh Goombah?
Undermining America is treason. That’s in our founding documents. Contributing to COVID pandemic undermines America.
You .....don’t give a crap anti vaxers ....are selfish TRAITORS!!