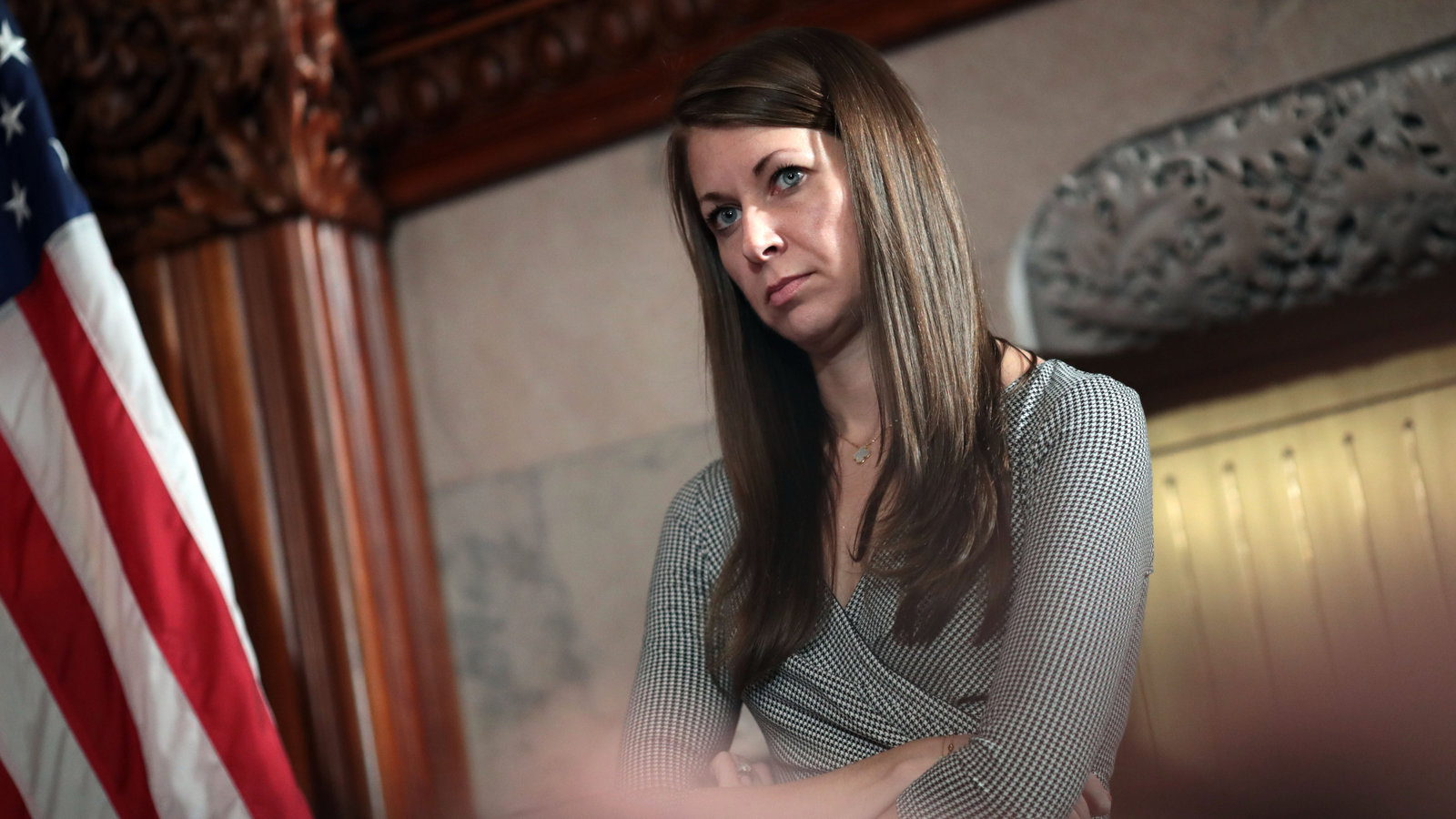 Gov. Cuomo’s top aside Melissa DeRosa stepped down Sunday as the governor faces potential criminal charges and calls for his own resignation over sexual harassment allegations.

The defection of DeRosa, who served in the most powerful unelected position in state government, is a major blow to Cuomo as he prepares to likely be impeached by the state Assembly.

In a statement first reported on Twitter, DeRosa said the past two years have been “emotionally and mentally trying.”

“I am forever grateful for the opportunity to have worked with such talented and committed colleagues on behalf of our state,” she added.

Investigators working for James’ office found DeRosa spearheaded the effort to discredit Lindsey Boylan, the first woman to go public with misconduct claims against the the governor.

Actually, Lindsey Boylan was not the first woman to go public against Mario's son...

Although the relentless coverage of Cuomo's sexual harassment scandal is good, 3 years ago a woman actually tried to warn reporters right to their faces and also Cuomo of sexual harassment and corruption happening in the Albany state house#CuomosGottaGo https://t.co/QIdpqus4gb

If she was a republican, she could have got a nice cushy job with Fox News.

Andy will move into her house so he can hit that like a freight train without brakes on the daily.

It's kinda funny if you google her and see all the old articles with her on the steps of the capitol.I wonder how the victims feel.

As you can clearly see, a tyrant will never relinquish power on his own because all tyrants are vainglorious cowards. The reason why New York City and New York State are now imploding into outright lawlessness, vigilantism and anarchy in the streets is because of the massive, unchecked, unregulated, flagrant abuses of power (imposed by the top tier levels of government tyrannical rule), all of which has been relentlessly reinforced by an openly practicing criminal-sociopath like Andrew Cuomo himself.

Consequently, the systemic damage to New York State that has been foisted for decades by and from the 'CUOMO, dynastic family CRIME WAVE' and the irreversible, irreparable sins of the father, sons——and, yes——even their imperious, ruthless mother Matilda, will be their defining legacy of a stranglehold combination of 'NAKED GREED,' cognitive dissonance AND Obsessive Compulsive Disorder (OCD), three forms of mental illness for which there IS no cure.

❝The inability to grasp the pathology of our oligarchic rulers is one of our gravest faults.❞ ——Chris Hedges

❝Civil disobedience is a sacred duty when the state becomes lawless and corrupt.❞ ——Mahatma Gandhi

❝The truth that survives is the lie that is pleasantest to believe.❞ ——H. L. Mencken

❝The collapse of the Roman Empire is a few pages in your high school history book, but it took like 250 years. Generations lived whole lives inside of the collapse, which is exactly what's going on right now——that our whole lives will be lived inside of those few pages called 'collapse.'❞ ——David Sirota (@davidsirota)

Different rules for libs.
If you are "sophisticated" you get a pass...

Nothing warms my heart more than watching both Cuomo’s go down in flames. There is a special place in hell for Chris. What Cuomo was involved in that bar fight years back where that guy got killed?

@Cuomosexual said...
"Melissa Derosa is cute"
But Lizzy is hot !

Mario Cuomo and the mob rumors: https://nymag.com/intelligencer/2014/12/mario-cuomo-and-those-mob-rumors.html. And so . . .

To this day we still don't know who beat the "living shit" out of the current governor's grandfather. Charlie Raffa.

Melissa Delarosa hates the negative news articles on how she protected Cuomo and released negative information on some of his accusers.

She thinks by resigning, the accusers and the media will leave her alone.

I hope ALL of the accusers file lawsuits against her and continue to speak out how she was Cuomo's enabler and sycophant.

🎶Welcome to hotel Cuomofornia/
Such a lovely place/
Unwanted embrace/

They're living it up at the H.C./
What a nice surprise/
Grab that trooper's thighs!/

Last thing I remember/
The whole chamber running for the door /
They had to find another job away from the second floor/
Relax said the AG,
and read these subpoenas please/
You can check out anytime you like/
But can't escape the US attorneys....

Huh?
Now the Democrats don't like her?
What about all the bragging and blowing smoke "Women of Change: Melissa DeRosa" First woman to serve as Secretary to the Governor. "Women for Change" "Democrats for Change" The government and medias own dam words !!!

Voters in New York better wake up because your facing a black progressive mayor and black progressive lesbian activist Governor. That's a good 10X worse then what you have now !! With almost all young voters brainwashed into socialism in the schools the older need to come out in huge numbers.

This state is in some serious deep shit with Cuomo II gone soon, Moscow on the Hudson !!! Democratic socialism (Communism) will take your guns, and socialize your homes, money (including IRAs) mileage tax on private cars not sharing.
Deep DEEP shit coming and you can bet this has been in the works behind closed doors for a long time !
Rats don't commit suicide, they kill each other and here is the final stab to seat that liberal progressive activist Attorney General as Governor.
We may as well go back 200+ years under the King of England's rule and call it "progress"

Stop and look at the whole picture here and be careful what you ask for !!

Seems almost all these single women suddenly coming out with allegations after YEARS are ultra progressive AOC types running for some kind of political position example: https://www.lindseyfornewyork.com/

"New Green deal, Mandatory Inclusionary Housing Requirements and Democratize of the Zoning Process, Reorient the city around bicycles and people not cars"
Perhaps they are all crazy ?

Add an liberal progressive activist Attorney General unhappy because her power is very limited to policing things like Wall street.
I cant stand the crook Governor Cuomo's but this all sure sounds like a worse organized gang coup setup to steal 100% control of everything in true communist manor.

Hell, I thought any team worse then Bidon, deBlasio and Cuomo wasn't possible.

Since she's a DEMOCRAT she should be able to land a cushy job with CNN.

What does one person have to rant here -it really takes down the credibility of this essential blog.


Only speculation but I suspect DeRosa and the Governor carried on a sexual relationship. Only if he restricted himself to her and just journalists, he would have been in the clear.

"What does one person have to rant here -it really takes down the credibility of this essential blog."
Start your own one and leave !

To second Anonymous, re: 'What does one person have to rant here - it really takes down the credibility of this essential blog.'

There are no rants on this blog, you nameless, faceless troll, only people with eyes that aren't wide shut. The credibility that strains on this 'essential' blog is YOU!

What shit are you smoking? I want some. Adams progressive? He’s a corporate politician in bed with whoever hands him the most cash. As for the gov? What proof do you have that she’s a lesbian? She doesn’t seem progressive either.

Mario Cuomo had ties to Joe Mattone and Nicky Sands. They were fundraisers and also involved in dirty deals at JFK. There are articles about this from the 1980s still on the internet. Really interesting stuff.