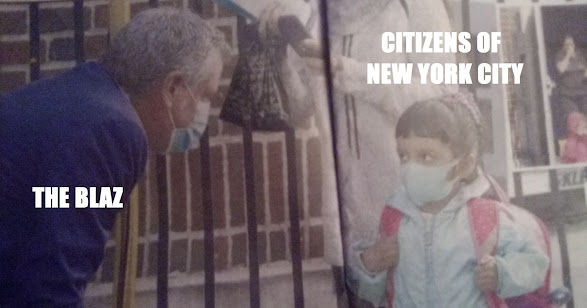 Hey, remember the children? We used to say things about them like, “They’re the future,” or “They should be exposed to culture,” or even “They should definitely go to school.” But the last 17 months have seen our society put kids dead last again and again. Now New York City is seemingly looking to banish them from public spaces altogether.

Announcing a “new approach,” called the “Key-to-NYC Pass,” the mayor decreed that unvaccinated persons won’t be able to participate in most indoor activities in Gotham.

Hizzoner explained it thus: “The key to New York City. When you hear those words, I want you to imagine the notion that because someone’s vaccinated, they can do all the amazing things that are available in this city. This is a miraculous place, literally full of wonders. And if you’re vaccinated, all of that is going to open up to you. You have the key. You can open the door.”

Left unsaid: Children will be waiting outside the door of this miraculous place of wonders. The mayor’s announcement included no exceptions for kids, leaving city parents, as well as potential tourists to New York, in limbo once more.

Asked about the announcement, Dr. Dave A. Chokshi, the city’s health commissioner, gave the impression that children were simply forgotten when the policy was crafted — neglect that is fully in line with how kids have been treated throughout the pandemic.

Have to blame selfish inconsiderate adults who refuse to get vaccinated for this mess.
A better idea would be to house unvaccinated adults in Rikers. I hear there’s more space there now.

This is what happens when you surround an idiot with a bunch of yes-men.

Why are you reposting a crap article written by a Russian immigrant who should be writing for Russia Today instead of an American newspaper.

UnAmerican! I will pray for you

I left NYC under the Dinkin's administration. I have been back to visit (occasionally) over the years. Truth be told it's too loud, dirty, dangerous and expensive. There are better places to visit and other than Nathan's CI and Katz's I couldn't imagine wasting my time at this point in the game.

The Dem Libturds imported more virus from around the world by having a wide-open southern border. Then put the diseased illegals on buses and planes and ship it to all of the U.S.

@flogger Countervail said... You don't get to decide what we read dipshit !

When common sense does not prevail anymore this is the end result of a mindless Democrat Cornpop Administration.

Gee, sounds like Di Strunzo is being a bit "fashest" with his take on the vax.

Hey there big hairy - katzs deli and Nathan's??? That's it?? Look, I know this plAce sucks, especially since uncle George's on Broadway closed.... But I coukd think of a few other joints to reminisce over

"I am being cautious and taking every single one of the precautions to protect myself against a virus that has a 99%+ survivability."

"Ok then. I'm being cautious and taking every precaution against an experimental vaccine that is 99%+ effective."

Remember when CRT was a television....

"Have to blame selfish inconsiderate adults who refuse to get vaccinated for this mess.
A better idea would be to house unvaccinated adults in Rikers. I hear there’s more space there now."

You sir are a fascist and would make a fine addition to the Nazi party. Reagan was right - Fascism comes to America under the guise of Liberalism. Vaccinated people can get covid too. Should we round them up too? Who else should we round up? Go to hell you tyrant.