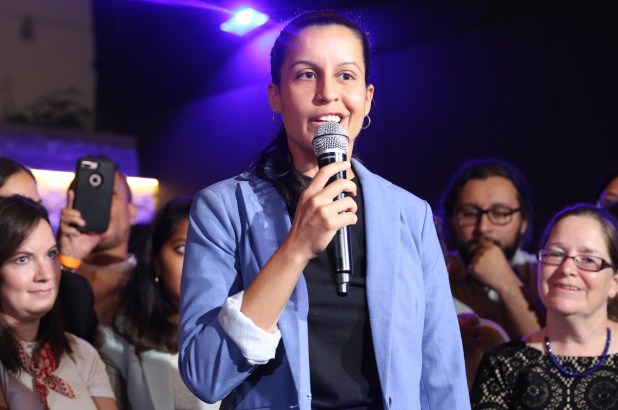 Democratic Socialist “bogeyman” Tiffany Cabán is extending a peace offering to the city’s likely next mayor, Eric Adams — after he declared war on her far-left movement.

“Nobody’s going to be surprised that we have very different views on how we achieve public safety, and there’s going to be a lot of tension and push-back there,” Cabán told The Post last week in an exclusive interview — in which she called herself a misunderstood “bogeyman.”

“At the same time, there are going to be areas where I will be eager to find common ground and I think one of the easiest places to point to is the crisis-management system,” said Cabán, referring to programs that deploy ex-cons to prevent shootings by talking down younger gang members.

“Eric has been somebody who has supported the expansion of CMS,” she said of the Brooklyn borough president. “He is someone who buys into cure-violence models.”

The socialist City Council candidate spoke during an exclusive sit-down interview Wednesday, the day after The Post reported Adams told supporters, “All across the country, the DSA socialists are mobilizing to stop Eric Adams.

Sounds like Ms. Caban is networking for the Speaker job.

Where was the AOC sit-down with Manchin and Sinema?

These people are no different than those who supported tyrants blindly in history. Even the most rabid of tyrants followers were passionate of what they believed.

All of these leftist extremist groups are running just below the surface of the turmoil our country is experiencing.

Very scary totalitarian times! Marxist, Nazis and Stalinist among us.

It’s time to stop being nice and time to give the Communist Democrats a taste of their own medicine! Charge them for the BLM Riots !

Expressions of Democratic or Socialist Parties are now obsolete replaced by the Gated Elites.

Not the Squad but the Goon Squad run be the Gated Elites.

You saw it here first.

The new NYC Motto under these Marxist PIGS !"The victim was taken to Bellevue Hospital and is expected to survive"

All you need to know about the "Real" Eric Adams. THis was recorded in March;

Who the Hell is Tiffany Caban?

Refund the police. Vote Felicia Kalan, the Republican candidate pitted against anti-law & order Caban, the leftist loonie. Your physical lives are at stake.

Russia went Putin/capitalist and were going socialist/communist.
Wonderful!😂.
Where the fuck do they think their freeloading programs are coming from? The sweat and money of the middle class.
We’re the meat in the sandwich between the rich and the bums!