Vaccine mandate makes COVIDIOTS out of tennis fans clustering on line at the U.S. Open 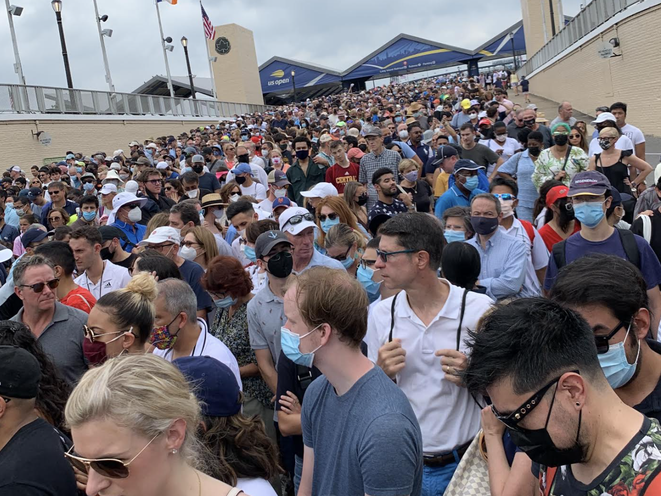 Tennis fans who flocked to the first in-person U.S. Open in two years were forced to endure hours-long lines on Monday, leading to “completely chaotic” and dangerous crowding outside the stadium, according to attendees.

The full capacity tournament drew thousands of visitors to the Billie Jean King National Tennis Center in Flushing Meadows–Corona Park in Queens. But while the event was slated to begin at 11 a.m., fans said they were forced to wait outside for close to 2 hours — keeping them from some of the early matches and leaving attendees at risk of heat-related illness.

Jessica Pearson, a Greenpoint resident who previously worked at the U.S. Open and has been coming to the tournament for more than two decades, said the lines and confusion were unprecedented.

“It was out of control,” said Pearson. “There was no crowd control from the stadium all the way back to the subway.”

In a statement, the U.S. Tennis Association said the delays were primarily caused by fans bringing an “inordinate number of bags this year.” They also said that patrons had arrived at the gates earlier than usual. "Previously, the number of patrons arriving to the grounds prior to 11 a.m. averaged approximately 10,000," the group said. "This year, the number arriving prior to 11 a.m. was only 3,000."

Others speculated that a last-minute decision to require COVID-19 vaccinations at the tournament was to blame. The USTA announced the mandate on Friday, after facing criticism for their original plan not to require vaccines or masks.

Pearson said the hold-up seemed at least in part due to broken metal detectors and a lack of staff. However, the association denied that vaccination requirement was a factor.

“The slow down seems to be centered on the Bag Check area,” the USTA statement noted. “The process to check proof of vaccination seems to be working smoothly and is not a major contributor hampering entrance to the site.

Please explain the fascination of watching 2 people swat a ball back and forth across a net. What am I missing? There's some kind of existential meaning in this?

They are outside! No biggie fries?

The headline is misleading. Seems to be multiple issues, not just the the hygiene theater.

Super spreader event ! Jabbed or not. Prove me wrong...

Super-spreader break-thru infections of all the vax jabbers!

Some seem to forget that tennis fans believe that they are superior to all others and need not take precautions to protect the hoi polloi.

Yes. The fascination that these idiots have with a sport is subhuman. Who in their right mind would be where they are in a line of misdirected Americans. No wonder we are where we are in this country.

The J'Ouvert was canceled For second straight year and this Crap is allowed ?

Only people attending MAGA rallies, or Hasidic funerals, are usually permitted to gather in large groups like that.

As long as they chant slogans praising Saint George Floyd (PBUH), they will have no worries of contracting COVID while waiting in close proximity to each other.

Oh, but the stenographers at Gothamist aren't?

A bag check issue at security caused the hold up but not the fact they weren't prepared to check vac papers after the Blaz lifted their exemption from the vaccine mandate? Maybe there were also tech glitches checking city and state vax pass apps? And also the possibility that people probably didn't bring them?

In more than 10 years this is first time I agree with georgetheatheist.

Good news! All available reseach shows that COVID spread outdoors is non-existent, excepting people shouting into each others faces for minutes at a time. Even a crowded situation like this will probably not cause a single case; certainly people sitting in their own chairs in the stadium won't cause spread.

Mr. know it all
Well ya, you think you know it all
But ya don't know a thing at all
Ain't it, ain't it something y'all
When somebody tells you. Kelly Clarkson

At George:
I don't get it also, I think I can s'plain this somewhat:
I would play Bass in McEnroes 1st attempt at a rock band in 1984. John was getting good at guitar and would book this rehearsal studio on 35-53 Steinway street (then SEI Studios in this factory that built these walk up "open style" payphone stalls.
The building is now "Tyles By Kia"
That then studio owner Danny would call me up asking to go jam with those guys, "they booked 4 hours, have cases of beer and need somebody who could play Bass".
-- John got me full access lanyard and credentials to the US Open to check out behind the scenes and watch.
PS: John is a very quiet, polite good guy in person and not what most people think. From what I observed he just don't like journalists, tennis people, judges and those guys in the tall chairs. --And yes, those people WERE assholes !!!

I enjoyed chatting with the Russian & Czec players, very bad English but from what I understood they were really interested in NYC things. I could not tell you who any of them were other then most were blond and could not wait for some 2 week curfew to end so they could go out and party.

I liked was watching the woman play from behind, they are really fit, fast and when your behind the player you not need to keep looking back and forth at a ball like a jerk.
What noted was all the old men, stuffys and corporate fats in the reserved seats were doing the same thing, I doubt they knew anything about the game also, nothing about the complex scoring and dumb terminology, they just watching, eyes glued to the blonds in short skirts just like they were watching CNN or FOX News.

It was the same way with the old lady's in those seats.
I remember John won that US Open and walked right out the stadiums entrance with regular exiting people.

CDC does not recommend outside masks! Follow the Fauchi!

@“
Mr. know it all
Well ya, you think you know it all
But ya don't know a thing at all
Ain't it, ain't it something y'all
When somebody tells you. Kelly Clarkson”

Can you not even write in basic English?