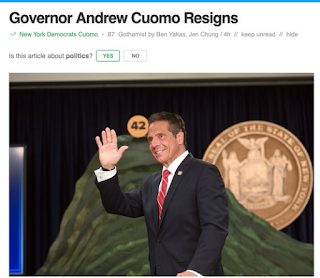 Developers, landlords, building lenders and other industry associates pumped nearly $500,000 into Cuomo’s re-election coffers over the past six months.

Many of the contributions poured in right before the campaign fundraising deadline.

Housing activists blasted the donations, noting that an important state law expires next June 15 that gives luxury developers’ projects generous tax abatements for charging non-market or “affordable” rents for up to 30 percent of their new apartments.

The program is supported by the Real Estate Board of New York, which donated $5,000 to Cuomo from its political action committee.

“It’s classic pay-to-play. There’s no doubt about it,” Michael McKee of the Tenants PAC, which wants the law repealed, charged of the political donations to Cuomo.

“We are going to spearhead a major campaign to terminate this law. It’s totally obscene we are subsidizing millionaires and billionaires with property tax breaks. There’s a glut of luxury housing.”

CUOMIGULA will never go. And he'll probably be re-elected. He could bugger a dead mule on the capitol steps at high noon and the reflexive "D" voters will put him back in office no questions asked.

Funny why the NY Post has an issue with this. The Murdoch empire has always been pro plutocrat. Is it suddenly becoming woke or left wing?

I hate this creep dictator Governor but no accused should be tried and convicted on Facebook, in the media, by a sitting president, mayor, assembly person, male hating militant femme'nazi lesbian or mayor. That's what courts and jury's are for.
These communists are violating the governors rights to proper procedure and fair trial.

Every dam thing they are now including slamming the whole governors office for, like intimidation, 2nd guessing, harassment, throat cutting, corruption, press bans, press kicked out, permits denied are the same dam things the mayors office, all news editors and city council does.
The mayors office is even WORSE !!
Why after all these years and terms is this black activist attorney going after the governor, his whole office and employees now?
Any heterosexual male, employer in the country could be accused of the same thing. Especially in Italian, and customs where people hug, kiss etc.
Its all part of living in a multicultural society these democrats love so much.

This bullshit is some kind of slandering for some special reason. Something stinks !!!
Admissible hard evidence and sworn in testimony please ???

I think this anti constitution, anti 2nd amendment, anti male, possible lesbian ? attorney general couldn't make mayor now she wants to cut a path for Governor.
And that's another thing, if this attorney general leading this witch hunt is in fact a lesbian how can any straight male be treated fairly ?

Do these people want to make any complement, goodby/hello hug, kiss, handshake be subject to harassment or a criminal offence in the future ?
Are all these people friggan crazy ?
This is a political coo and tactic !!

You bet it has, now with Trump gone, more greyheads who like blonds in short skirts in the cemetery, recent wide sweeping permit controls what else are they to do if they wanna stay in business.
Same shit with Fox 5 and all its affiliates.
Like the others NY Post does whatever the Mayors Office of Entertainment and Media tells them to do or say. Disobey and you lose your permits and press credential's to operate in the NYC 5 boroughs. News, Films, TV, including parking and remote weather vans.
If you don't kiss ass and play nice the city puts you out of business.

The NYPD is out of the picture and Mayors Office of Entertainment and Media now handles permits and credentials. This became effective around 2 months ago.
Its the New York City version of Irans "Ministry of Culture and Islamic Guidance" Same shit from the same communist assholes only less the bullets & firing squad.

The Dems figured out how to distribute the money directly into their pockets.

12 years of this scumbag isn't enough? Why not just name him Emperor For Life and be done with it? Just as it's done in other 3rd World toilets.

I think Andrew is now officially Fredo. As bad as Chris is (and he is terrible), Andrew has done much, much worse.