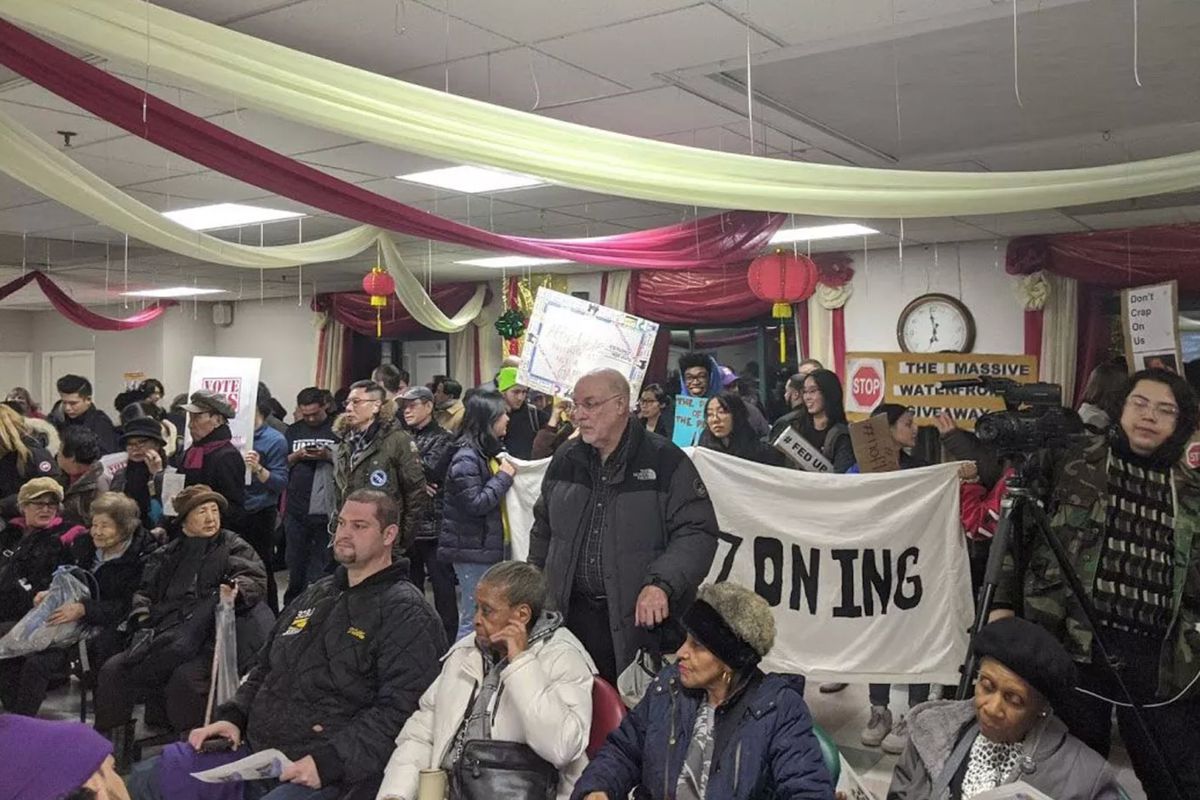 Community board chairs are pushing back on a requirement that their meetings resume in person next month — with some saying they plan to defy state law if necessary to keep their sessions COVID-safe.

And as interpreted by New York's official watchdog for public access to government, the state's open meetings law means that every community board member who Zooms into a meeting now technically must advertise in advance the address they are dialing in from — even if that is their home — and open their doors to all who wish to join.

After Gov. Andrew Cuomo suspended in-person government meetings last year in declaring a state of emergency at the dawn of the pandemic, the city's 59 community boards migrated to online video platforms such as Webex and Zoom.

Civic engagement soared as members of the public, the boards and government agency reps easily participated from the comfort of their homes via the internet, mastering the mute button and other video conferencing features.

But once vaccinations made gathering safer, the state lifted the emergency order on June 24. Community boards were once again subject to the state's open meetings law — requiring public access to the physical premises of an official gathering.

With the return of board meetings following a summer break coming up in September while virus risks remain, volunteer board members and boards' government-employed managers are sounding the alarm on the risks of in-person gatherings, pleading with city and state officials to allow them to continue meeting remotely.

"Not only are we still in the midst of this ongoing health crisis, but we're on a trajectory with cases going up," said Alexa Weitzman, chair of Queens Community Board 6, which represents Forest Hills and Rego Park. "This is not a time to reconvene in person."

Because board members are not employed by the government, the vaccine and testing mandates covering city workers do not apply. Nor can boards screen members of the public in the way that restaurants, gyms and theaters now must.

All in the room must wear masks, according to a City Hall memo, which also directed community boards to keep six feet of distance between participants.

Morano and Weitzman told THE CITY that they plan to keep holding virtual-only meetings, either because of virus concerns or because of a lack of space to socially distance.

Zoom eh? CCP really wants to know what is going on in NYC. Keep the meetings virtual, these people are brain dead anyway, the damage will be real from their stupid malicious decisions. They can later blame everything on Covid.

Lack of space to socially distance does not apply to public concerts and tourists attractions the Mayor places so much importance on.

Just like most useless UFT Teachers. They want to stay home for years and get paid a full salary for a part time job. This only happens in shit hole Demorat Cities !

That's what happens when your employer pays you $100 to get the vaccine and none of your Facebook friends actually care about you.
This was definitely the case for my younger sister. Even her gymnastic peers were bullying each other to get vaccinated and wear a mask, otherwise they would exclude people.
I do find in fascinating how even the most seemingly benevolent people can cast shadows all the way to hell given the circumstances. Yet most people will deny their potential for evil.
Some of the most kind people I've ever known are literally calling for the imprisonment of people that won't wear masks.

What difference does it make? The only freedom that is now available exists in all corporate boardrooms; you taxpaying, zombie-automaton robots have no power that is only underscored by ALL vapid, vacuous community boards, all of which are worthless, sycophantic drones of the entrenched, pre-selected, establishment-rigged powers that be, which is why no one bothers to show up for these insipid, 'do nothing, know nothing' events in the first place——and, that was WAAAAY BEFORE the Corona-bologna 'SCAM-demic!'

Do yourselves a big favor, land serfs, proletariat peasants and plebeians: Either move out of this permanently damaged city (of hollow, dystopian nihilism) immeidately in order to cut out and rid yourselves of all of the politically failed, government imposed New York City middlemen (of epic government fail), learn how to disobey immoral orders——or be DRAGGED!

"For us in Russia, communism is a dead dog, while, for many people in the West, it is still a living lion" Aleksandr Solzhenitsyn

Where's CB7 Chair Gene Kelty? Can't we get some drama of him chasing an innocent, much smaller, Asian lady around trying go grab her cell phone, while NYPD sets up a protective wall around Kelty? CB's should be "DEFUNDED', they are a waste of NYC taxpayers money and corrupt. Speak up New Yorkers!

80% of my life I haven't had medical insurance. How do I become a illegal immigrant?

"They want to stay home for years and get paid a full salary for a part time job. This only happens in shit hole Demorat Cities !"

Community Board Members aren't paid it's an all volunteer "Job"

Community Board Members are useless in Queens ! Calling them bums would be a insult to bums. They are chocking the life out of NYC! They push socialist principles on you the sheeple. The elites will hold on to the power and money regardless of the politics imposed on the rest. Socialism does however depend on a wide base of people living just far above rock bottom to keep them from fighting the system. The last thing socialist leaderships want is a middle class or middle class aspirations within the great unwashed.

Virtual hearings....toy government!
Is anything real about community boards besides getting kickbacks from developers?
CBs are money pits for fake government whose votes are only advisory....without any real power! So why have them!
District managers are rewarded with $90,000 salaries for doing little. Political payback patronage jobs!