YouTube took down a video of Rep. Nicole Malliotakis unconditionally without warning or explanation.

The video consists of her news conference in which she announced her lawsuit against the Democrat mayor of New York City, Bill de Blasio, for implementing a vaccination passport system in the city.

YouTube reinstated the video shortly after being contacted by Reclaim The Net.

Following De Blasio’s order for a COVID-19 Vaccine Passport mandate, Malliotakis has joined the fight against the affront to civil liberties.

The mayor wants to make it illegal for anyone without a vaccine passport to work at or patronize gyms, entertainment venues, and indoor restaurants.

“The Mayor’s vaccine mandate is an overreach of government,” said the Representative for Brooklyn/Staten Island . “The government should not be imposing such a mandate on its people and small business owners.”

“We have received calls from countless individuals that we represent – both vaccinated and unvaccinated – who are concerned about sharing personal health information with individuals they don’t know, or fearing they will be left out of society because their doctors recommended they do not get vaccinated due to other medical issues.”

“It is beyond ridiculous that the government is mandating these already struggling small business owners to be the city’s vaccine police.” 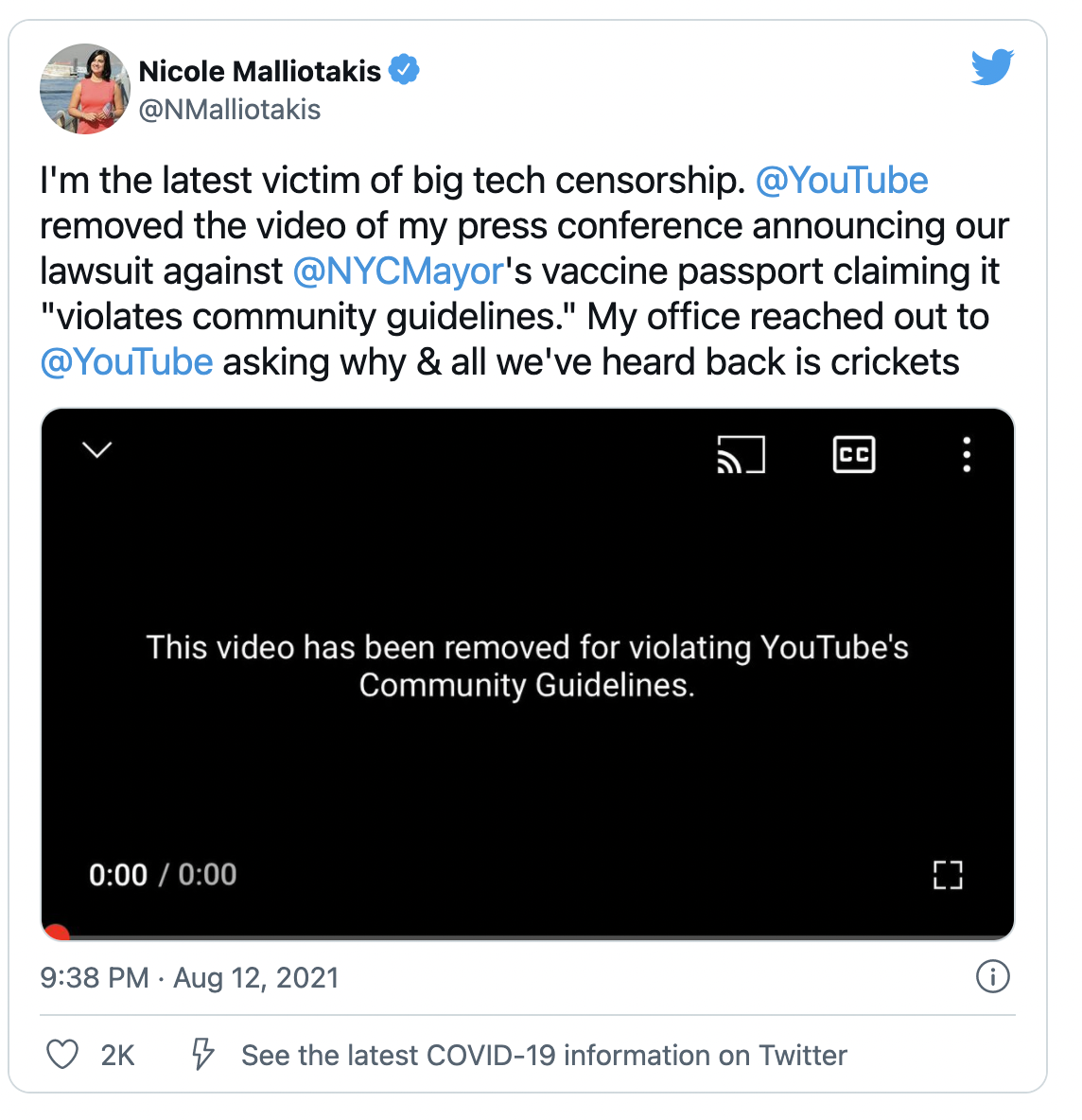 Why did YouTube censor any discussion of Ivermectin ?
https://www.youtube.com/watch?v=AfjrpjqdQxI&ab_channel=LexClips

No shirt. No shoes. No shots. No service.

As a devil worshipper, I claim a special religious exemption to wearing a mask. I want my freedoms.

C'mon Nicole, Google owns YouTube so what did you expect.
It's all about cash and promoting the progressive ideology while smothering the political conservatism.

I am vaccinated yet against mandating vaccines. If you bother to search various scientific publications you will discover news about a good number of individuals in the US, Canada and Europe who had sever side effects and some died after taking the shot. As for masks, I wear them since a long time, yet again, I know very well that only N19 really work but those are unwearable.

They censored it because it was too boring.

I can't wait to get my booster shot.
Moderna #3. Won't feel safe until I do. I follow the science. You anti-vaxxers can all croak for all I care.

Wouldn't surprise me when the Taliban gets a blue check mark on Twitter...

Stop attending these overcharging worthless gyms and take a walk.

Malliotakis thinks she's the next Trump. No ethics, no values--just a Trumpy shill.

If only the American people knew just how many laws were passed due to non-existant problems fabricated through collaboration between politicians and journalist they would be shocked. It's a process taught in university journalism, political science and social justice courses.

I am Boe Jiden and I approve this message.

De Blasio needs to be IMPEACHED!!!

Who's that guy surrounded by a bunch of goons complaining about Russia? Don't he know that Russia is our friend now. Putin wishes all the best for the USA.

If you are vaccinated you are free of the masks oops changed my mind bait and switch tricked ya...

How come Staten Island has the highest rate of COVID?
This GOP stronghold is killing off all of its GOP voters!
Dumber than dumb!
Give Richmond to New Jersey! Shed that ignorant borough!

WTF is it about Greeks?
Athens....the cradle of democracy.
And they reject it and wind up fascist bent!
She’s a political cooz!