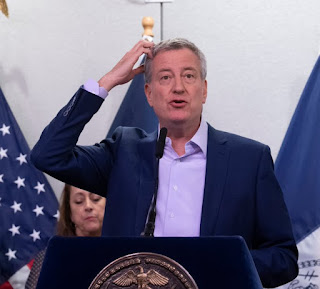 Union leaders representing 350,000 city workers plan to file a legal action to stop Mayor de Blasio from implementing a vaccine mandate for Department of Education employees without their input.

“Many of the unions support and urge their members to be vaccinated. However, the city is required to collectively bargain the steps to be taken for implementing this policy” said Harry Nespoli, chair of the Municipal Labor Committee.

His group is filing an unfair labor practices complaint over the new directive.

“Our members’ bargaining rights in this situation must be preserved. We are willing to discuss the steps for implementation as well as situations where accommodations would be appropriate,” Nespoli said in the statement released just a few hours after de Blasio announced the new policy.

All 148,000 Department of Education workers, including people who are employed in the DOE’s central offices and contractors who work in schools, will be required to have at least one shot by Sept. 27, the mayor said at his daily press briefing Monday morning.

De Blasio said he’d implement the policy with or without the support of unions. But Nespoli threatened Monday afternoon that “unilateral action by the city will only lead to a delay in the implementation of a policy that is designed to protect the public and its employees.”

Henry Garrido, head of District Council 37 that represents school crossing guards, lunch aides and other DOE staff, said he does not believe the city has the legal authority “to change the terms and conditions of employment without bargaining.”

Certainly, Harry is right and will win the complaint. Probably why NYC's great leader looks clueless as usual.

The vaccine is already starting to kill people but you will not hear about it in the mainstream media. I know someone who had covid and still got the Pfizer vaccine, now having serious breathing/lung problems. The blood clotting is real, not conspiracy theory.

These socialists are getting a half decent pay check and health insurance and paid vacation. I'm outraged!

I stand with the unions and am against the fast-tracked emergency approved vaccine mandate. It should not be legal to force people to take something that we no zero about its long term affects. End of story. Some of the comments here are so ignorant. I am not a socialist or a democrat or a republican. I am a realist, a progressive, and believe in basic human rights.

Aww. Unions are complaining that the idiot they supported didn't consult them on the fascism he is imposing and that they themselves are likely fine with. How DARE he not check with them!

You should not be mandated to get the vaccine. It starts us down the slippery slope. After this what other medical treatments will the government mandate? This county is loosing its freedoms more and more each day. I got the vaccine, but it should be everyone's personal choice.

@“ THESE PROFITEER SOCIALISTS RETIRE ON FAT PENSIONS AND BUY LUXURY HOMES.”
I’m curious to know what type of luxury homes teachers buy? Are they buying up valuable real estate in Park Avenue? Or is your definition of luxury anything with a roof?

If your employer mandates a vaccine. Get another job. It’s the right wing utopia free market economy.

@I got the vaccine, but it should be everyone's personal choice.

Totally agree with you. Apparently abortion is a personal choice, but vaccines are not.
Maybe they should mandate drugs and booze too. After all smoking is bad for you, but you can dope and drink yourself to death.

For all intent and purpose this so called "vaccine" business is a continuation of Obamacare. Nothing personal on the party level, but guaranteeing big profits for insurance honchos, big pharma honchos is pretty disgusting. Instead of spending $2.3 Trillion in Afghanistan, how about health insurance for the American people? Does that work for you commies, democrats, republicans, independents?

Approving a GMO shot (incorrectly called vaccine) for human use is also very fishy.
They did this with seeds, plants and animals. Big lawsuits followed.
What's next? Own humanity via modified genes?
Because SCOTUS already stopped once this non-sense, but left the door open for "copies of genes", now is the time via mRNA to try this shit again?
You fuckers still don't have a CURE for the common cold, cancer after billions and billions of dollars. Yeah, you guys have Sars-Cov-2 under control. We are up to booster shots. What is next? Monthly subscription to Pfizer?

"Monthly subscription to Pfizer?"
If it saves one life... Say the Sheeple.
​I am not deceived, FREEDOM triggers the Marxist and causes them to reveal their true repugnant selves.