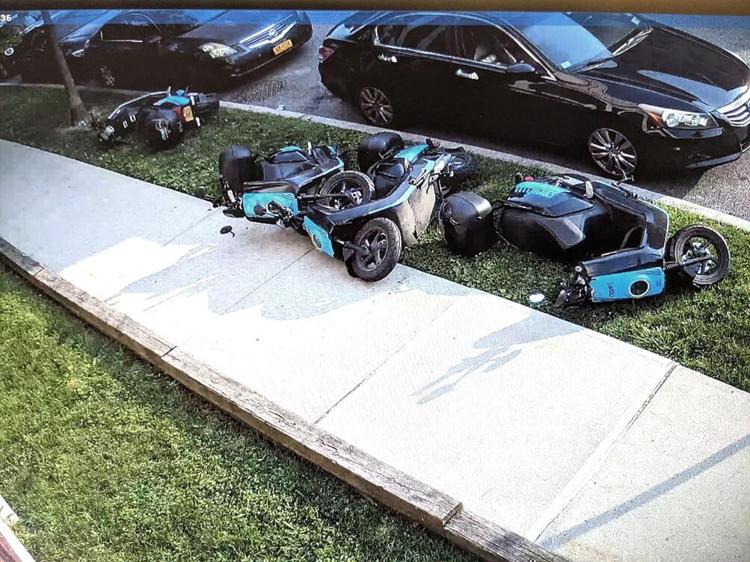 The image is a stark one.

Four of the sky-blue Revel scooters that have become ubiquitous on street corners in some sections of Forest Hills were photographed last week, not in the street waiting to be rented by a new rider, but on the other side of the curb, laying on their sides in the grass on a side street just off Union Turnpike.

At least one appeared to be damaged, with its mirror laying a short distance away on the sidewalk. The photo doesn’t indicate whether, the damage was incidental to the vehicles being moved by someone looking for parking or done with extreme prejudice.

The scooters began appearing in Forest Hills back in the spring. Unlike Citi Bike vehicles that are taken from and returned to specific docking bays, the scooters, under a city-approved program, can be left on the street for the next renter to pick up and drop off when finished.

While they must adhere to all city parking and traffic rules, they have not always sat well with some Forest Hills residents, who have complained about abuses on both fronts.

The apparently damaged scooters even came to the attention and social media accounts of Tom Verni, a retired NYPD detective who now works as a crime and law enforcement consultant for media outlets. He also is a former resident of Forest Hills and Kew Gardens. Verni, too, said the photo appears to show that at least one of the scooters was damaged.

“They’ve been springing up like dandelions all over the place,” Verni said. “With Citi Bikes, you have stations that take up a quarter-block, half a block. The Revels people leave them just anywhere. It’s becoming a nuisance.”

Verni said he has seen the scooters parked illegally; parked in front of driveways; and parked between cars, often leaving them inadequate space to pull out without physically moving the scooters. He has also seen them parked at curbs on alternate-side-of-the-street parking days when street sweepers must detour around them.

“All true. Those are the calls we’ve been getting,” said Frank Gulluscio, district manager of Community Board 6. Gulluscio said Revel officials did speak before CB 6 before the program kicked off, but that was it.

“It’s not like we had a say,” he said. “The city had already approved it.”

Around where I live in Maspeth I see cars, vans and pickup trucks taking up all the parking spaces in most blocks. Lots of people around here are unhappy about this.
I'm sure it's the same in most other parts of Queens too.

Why isn't the city and NYPD looking into it. I think a car takes up much more space than a bicycle or a Revel scooter. I'm sure there will be some indignant car owner whining that their few hundred dollar registration tax covers this parking and other road usage. No it doesn't.

Revel is a despicable bunch of B.S. "Green" fanatics who are in the business of stealing public space. G-d knows whose palms they greased to get the City OK to engage here...

It’s the free market economy. Of course the communist would want to regulate them and get them off the street and sidewalks. That’s an affront to our freedoms.

Around where I live in Maspeth I see cars, vans and pickup trucks taking up all the parking spaces in most blocks. Lots of people around here are unhappy about this.
I'm sure it's the same in most other parts of Queens too.


BS BS and more BS (you need to talk like this around the Woke Snowflakes who fancy themselves Thugs.) I think that the gloves should be taken off these entitled kids and we should start to treat them like adults. Time to grow up kiddies. Your cohort might be loud but it's piddling when you have to face real adults. You just keep pushing. It's the excuse we need so you get pushed back so hard your teeth will rattle. It's about time we start exposing you for what you are: BS BS and more BS.

The new Marxist future for America. One scooter fits all. Insanity for all!

"Few hundred dollar registration tax covers this parking and other road usage. No it doesn't."
Wrong !
Dippy did you forget about the gas tax, tolls and DMV charges. Plates, Licenses...Insurance

I suggest you move out of Maspeth and into Washington Square Park and take your bicycle and Revel scooter with you. Another fucking tree hugger telling us what to do.

@"BS BS and more BS"
Another self entitled car owner with the "Just because I drive a big hunk of metal, I have the God given right to ...." attitude I suppose. I presume you'll spend the rest of the evening beating up your wife to alleviate your anger.

@"Dippy did you forget about the gas tax, tolls and DMV charges. Plates, Licenses...Insurance"

That doesn't cover diddly squat. The taxpayer has to subsidize your right to own the road.

Anyone complaining about cars, vans, and trucks parking on the street in Maspeth should move to the suburbs. There you'll have plenty of empty streets to park your bicycles and Revel mopeds.

So if I happen to slice the shit outta the tires nothing happens, right

Dippy, No one owns the roads in NYS. Can you think before you post such shite,
The taxpayer subsidized your failed Marxist CRT education we should get a refund !

Anyone complaining about scooters or citibikes parking on the street should move to Nebraska.

"Anonymous said...
The new Marxist future for America. One scooter fits all. Insanity for all!"

I always thought that scooters were just a means to get from A to B, just like walking, driving or taking a train. Thanks to your wisdom, I now realize that scooters are part of a Marxist plot. How intriguing.

"I'm sure there will be some indignant car owner whining that their few hundred dollar registration tax covers this parking and other road usage. No it doesn't."

Break that down for us, please!

@“ Break that down for us, please!”
I’m not your accountant Frodo. Do it yourself. Find out the average monthly rental cost per sq ft in your neighborhood. Multiply that by the size of your piece of crap vehicle. That’s how much you should be paying per month for the real estate your clunker is using up.
Depending on the weight of your mobile scrap heap on wheels, find a highway engineering manual , and see if it helps you figure out the wear and tear you inflict on the highways per mile driven. Find the cost of repairs,etc. etc. Then on to the air pollution you inflict on regular joes. Medical costs, funeral costs.
You get the idea.
Come back next week with a figure.

"Break that down for us, please!"
He's too lazy so I did a 5 minute search.

"Break that down for us, please!"

I have one SUV, one luxury sedan and a classic convertible muscle car for the weekend.
My wife has a mini van for driving my three children.
I also have a Harley motocycle, two snow mobiles. two atvs at the Catskill vacation home.
Oh, and a plow truck for snow and a riding mower, three push mowers and three weed whackers. All gasoline....