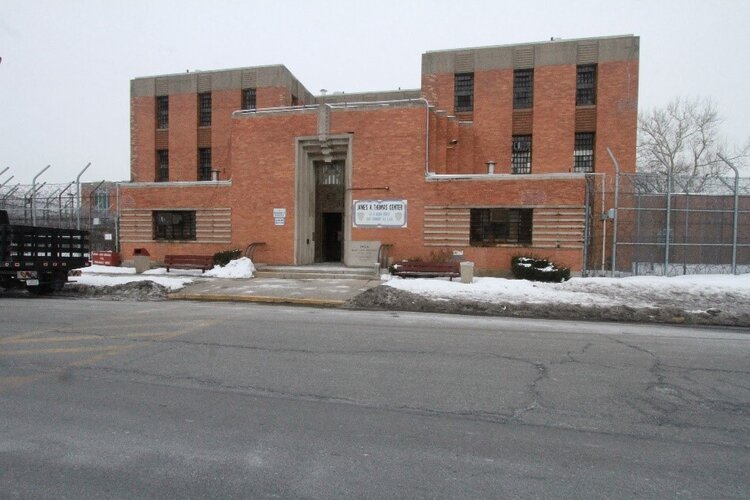 In a major step toward the closing of Rikers Island, the New York City Department of Correction transferred over the oldest Rikers correctional facility to the Department of Citywide Administrative Services, the agencies announced this week.

The handing over of the James A. Thomas Center, named after DOC’s first Black warden, marks the first time the DOC has transferred over a Rikers facility to DCAS, which now owns the building.

This month’s transfer, and the others to follow, are some of the earliest steps in the city’s transition into its borough-based jails program and the eventual closure of Rikers Island as a jail facility.

“This is a major milestone in the historic plan to close Rikers Island and create safer, fairer, and more modern borough-based jails,” DOC Commissioner Vincent Schiraldi said in a statement. "Being able to close Rikers and create borough-based facilities is a natural result of our city's multifaceted efforts to reduce its jail population and end the era of mass incarceration.”

The James A. Thomas Center, which closed in 2021, was built in 1933 and was the island’s first permanent jail.

Now that it has been transferred, DCAS and the Rikers Island Advisory Committee will plan a sustainable use for the facility, as part of the city’s Renewable Rikers Act. Under the law, the island could become home to several renewable energy sites if studies conducted in the coming years prove it to be feasible.

"Today marks a historic occasion for ending mass incarceration in our city and re-imagining Rikers Island," said Lisette Camilo, the commissioner of DCAS. "DCAS is eager to do its part to build a brighter future by transforming Rikers Island into a hub for sustainability."

Mayor Bill de Blasio, who called closing Rikers Island a “moral imperative,” spearheaded the borough-based jails program, which was approved by the City Council in 2017.

“Transferring these facilities from DOC to DCAS brings our plan to create a smaller, safer, and more humane jail system even closer to reality,” de Blasio said.

This is really happening. And with the horrendous bail reform law, they did this entirely on purpose at the expense of the citizenry and society. Beware of anyone who utters the word "re-imagine"

Yes, and plunge the whole city into mass murder and chaos.
Like the mayor and Governor, Vincent Schiraldi is an asshole.
The reason Rikers was so dangerous is now on OUR STREETS killing us. For example look how many times liberals tried to reform people like Charles Manson, all your most dangerous mobsters.
The criminally insane can not be reformed.
They tried this in France and Amsterdam and it did not work --and they CANT undo the mess because the jails are now schools, shelters and housing.

Since when does jail have to be fair?

Yeah sure. The second the criminal hits walks out of the prison, his next victim is literally standing right on the corner or just 2 blocks away from the school. What a stupid idea just to give the rich their own PRIVATE island right off of nyc. And guess what? Their private island will be low in crime because all the criminals moved into a residential neighborhood where people actually have to work for a living.

A mini jail coming to YOUR NABE soon.
Arm yourselves, citizens😂😂😂