It takes a village to raise zombie trees 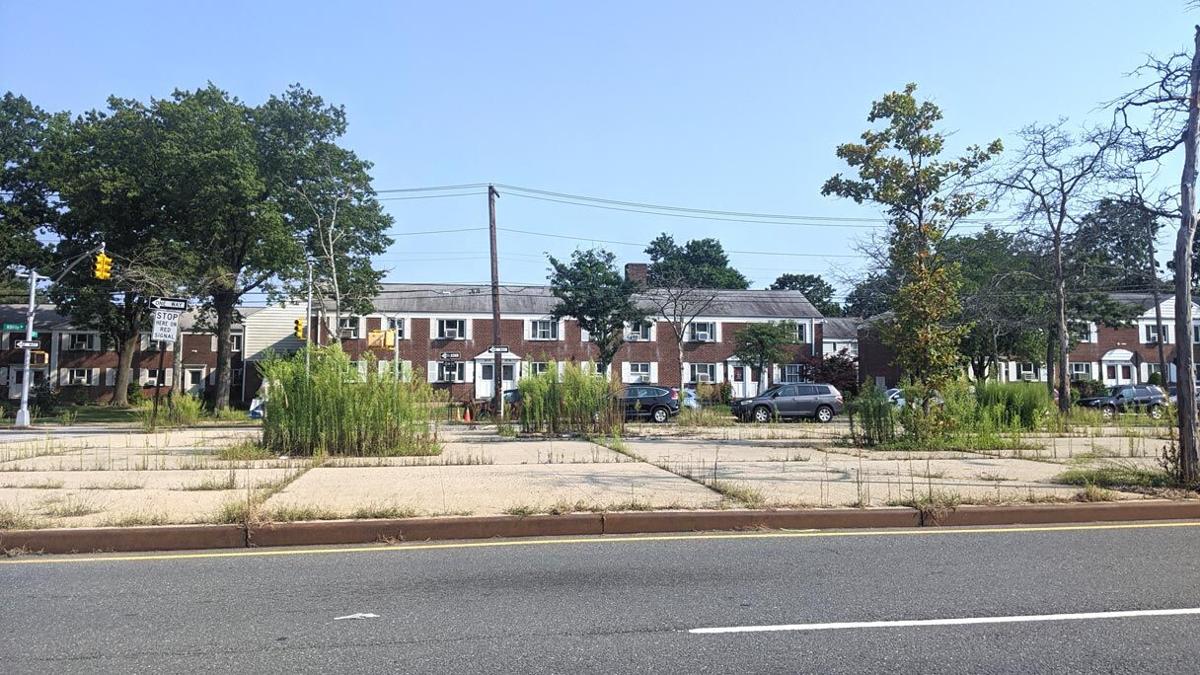 For decades there have been dead trees and an overgrowth of grass and weeds that has caused cracks in the medians that stretch from Springfield Boulevard on Hillside Avenue to 231st Street and Hillside Avenue next to Martin Van Buren High School in Queens Village, according to Kirby Lindell of Bell Park Manor Terrace, a housing cooperative for veterans within the neighborhood.

“It looks like a jungle now,” said Lindell. “Nothing gets done. The trees have been there for years, and they put up a couple of live ones and left the dead ones there. It looks like ‘The Addams Family.’ It is right in front of the high school and is not a good optic.”

Lindell fears that the dead trees and the cracks in the curb from the weeds are not only a possible safety hazard, but they could affect the property values of the area and might dissuade parents from sending their kids to Martin Van Buren High School, which has started to turn things around after facing possible closure in 2012.

“This is an ongoing thing year after year and they never clean up the weeds,” said Lindell. “If you are ever around that area, some of the weeds are 4 feet or taller — all over the median it looks like a rainforest. It makes the whole neighborhood look rundown and the city just ignores us. Other parts of the city, like Brooklyn, Manhattan and Western Queens, are taken care of, but it feels like we are forgotten over here.”

If nothing gets done now, Lindell fears it will take even more years to get rid of the unsightly weeds and dead trees.

“It took 10 years to get Braddock Avenue repaved,” said Lindell. “This is a very good middle class neighborhood, with a strong school system, but the city has left us ... maybe because it is Southeast Queens, I don’t know why they don’t help us.”

Lindell has reached out to 311 and Councilman Barry Grodenchik’s (D-Oakland Gardens) office, but fears that the elected official, who will not be running for re-election after a sexual harassment scandal in 2019, will spend the remainder of his four months in office as a lame duck.

Better than no trees.

In most communities, they manage to put together a civic and do the cleaning of street malls and the like. Most communities would have created a civic to clean this.

In the diverse Nirvana our pols claim Queens has become, the tawdry condition of the street is no problem. When you consider the countries that the locals are from you would likely get a consensus agreement. What is the big deal?

So stop acting White and move on to tackling systemic racism, not urban squalor.

Lindell, go to Home Depot and buy a weed whacker and a chain saw and cut the damn foliage down yourself. You know what to do.

A city abandoned. Not just in theory, but in fact, as everyone can see!

Not so greater NY needs to splinter. Queens has always been a neglected borough-it would be better off reverting to what it was pre-1898.

All the medians in Queens are in terrible shape. They are cracked with broken curbs, weeds, and garbage all over. Its a complete embarrassment the city doesn't maintain them. 10 years ago I made a 311 complaint about the median on union turnpike being broken. They still haven't gotten around to fixing it yet.

But they have no problem sticking brand new speed cameras in them to get everyone going a few miles an hour over the limit. Those they know how to maintain.

"Lindell, go to Home Depot and buy a weed whacker and a chain saw and cut the damn foliage down yourself."

Why should he have to? Shouldn't the city with all the billions in taxes be responsible for basic maintenance of their median? The city pulls millions out their ass for utter nonsense programs and other waste, but can't have a crew go around once a month to these sites and maintain them?

Uugh, all that green stuff. Who lives there? A bunch of tree huggers? Pave over it all.

Derelict nature or jamming in high rise buildings! What’s better? Get off your lazy asses and volunteer to trim. Afraid of getting callouses on your dainty hands? BAH!
Easier to comment, no doubt!🤮💩

Have you seen the Queens Blvd medians lately? Pathetic. Total abandonment by our mayor and out city agencies.

"In the diverse Nirvana our pols claim Queens has become, the tawdry condition of the street is no problem. When you consider the countries that the locals are from you would likely get a consensus agreement. What is the big deal?"

The roads and medians overseas are in way better condition than NYC. This wouldn't happen in Singapore, Shanghai, Seoul, Paris or another world class city. But NYC has the most crooked unions in the world. Municipal workers here do the least work possible for the highest cost.

Some local politicians and candidates have organized street and park cleanups this year. The Chinese city council candidate in Elmhurst ran Sunday events for months. Brian Barnwell has been organizing them on weekends in Woodside and Maspeth. Problem is that interest fizzles after a few months. Volunteers get busy with school, work and other obligations. Civics are great, but they aren't going to maintain thousands of miles of roadway medians. The weeds are enormous on Utopia Parkway and Queens Boulevard. You need professional equipment for that.

Giant weeds and derelict medians were also common in the 1980's when Queens was way more White. The solution was weed killer, which you only need to apply once or twice a year. But the City is against herbicides and pesticides nowadays.

Message to the white liberal: go out into the 'hood and talk to people. Find out where they are from and their opinions. Then google their home country. Tell us what you see.

The last thing we need here is a white liberal inventing reality and suggesting that the rest of us pay yet more of our hard-earned income to satisfy their dreams of city (or should I say voter-base) building. I see it every evening on the news both here and abroad.

No credibility. Time to move on from them. They had their say.

BTW, the city never looked this bad and where it did, was not in White communities whose ex-residents list things like this as one of the main reasons they moved.

That would be a great place for more Homeless Encampments the city refuses to get rid of and let the homeless do what ever they want without consequences.

This is why we pay HIGH Property Taxes here in Queens!!!

So all services we need can be IGNORED but UNWANTED Homeless Men's Shelter can be shoved into residental neighborhoods to bring more Sex Predators, Violent Criminals, and Drug Addicts many of us DO NOT WANT.

The City ignores our needs but are only interested in the needs of those who don't pay their taxes but commit crimes and abuse the system.

This wouldn't happen in Singapore, Shanghai, Seoul, Paris or another world class city

But the fact of the matter is our imports come from Tegucigalpa, Mumbai, Dhaka, and Belem. oh, yes, Kandahar.

"The city just ignore us"

The DeBlasio administration and the city have money for free public concerts, and putting a giant Ferris wheel near Times Square...but they don't have money and resources to fix and maintain the trees, sidewalk weeds and fill in the cracks and potholes.

Typical of local city gov't. Ignore their constituents and their problems, Cater to tourists and give them what they don't need.

It will probably be cleaned up when a new "Luxury Condominium" opens in the area.

I thought Trump fixed all that stuff with his great infrastructure project. Surely this must be fake news.

Prove Me Wrong said...
"If you really want to screw something up, hand it over to the government"

Just watch the Dems run from their failed cities and move into working cities and then try to change them.

"I thought Trump fixed all that stuff" No cure for #TDS !

Prove Me Wrong said...
"If you really want to screw something up, hand it over to the government"

How can anyone prove you wrong. You have been right about everything your whole life. Why would anything change now.

"How can anyone prove you wrong"
He’s just guy with some common sense ! He's just being truthful.