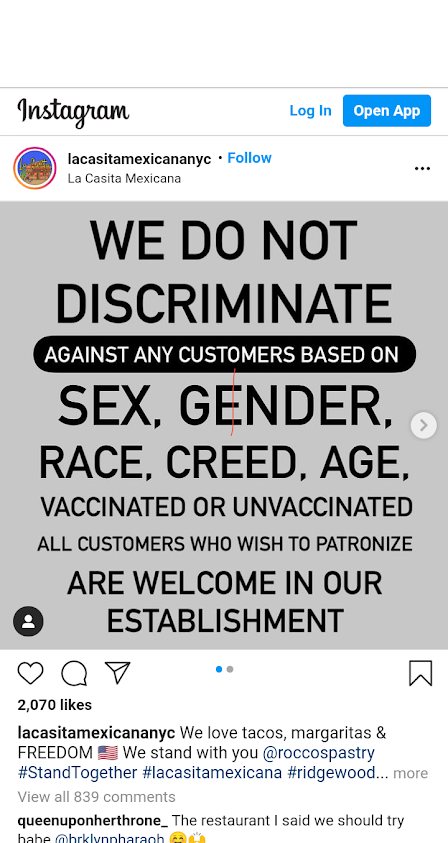 The Left: “We empower minorities….as long as they are democrats”

Where is this place? Hope the restaurant owners are fighting back.

Oh! Suddenly Mexicans are popular again with the right wing.

It's about time someone in NYC grew some.

"Oh! Suddenly Mexicans are popular again with the right wing"
They do the work thay most Millennials and Zoomers can't carry through.
It's called hard work !!!

@ Mexicans are popular again with the right wing.

Spoken like a true snowflake. Must be easy in your world, left and/or right wing.
Try to focus on right and wrong regardless of party affiliation.
There is more to life than Diet or Regular Coke.

Where is the restaurant? Will make it a point to visit them, Mexican food is delicious.

Sheeple aren't rich White Liberals the biggest racist in America ? Will they divide the world with false history and science and a uninformed worldview ?
Time will tell...

America First said...
"Think of our history as ‘progress,’ as the story of a people and a nation that always sought the improvement of mankind, the advancement of liberty and justice, the broadening of pursuits of happiness for all,” David Blight

The Dems I know never connect the dots and appear unwilling to change.
Now is the time to throw/vote the leftist bums out !
When they start making us ware a star on our jackets you'll know whats next.

I bet they get shut down

Maybe build a wall around New York State that prevents demorats from moving out.

Liberal: "We're not proud to be American."
Also Liberal: Chooses to live in America anyways.

Funny how that works...

Do you ever think that the founding fathers imagined a time where endorsing patriotism would be enough to label you as an enemy of the state ?

Everyone who voted for deBozio owes the world an apology.

It is foolish for a business to make a statement like this.

It just puts a target on you, or your operation.

This whole thing will play out exactly like the sign-in sheets did eight months ago. People just scribbled whatever on them.

Here, it will be just a tiny image of a CDC card or fake “Excelsior pass” –etc on somebody’s phone.. We’ll have no practical way of verifying any of it (we can’t even really be sure of people’s I.D. these days).

Given that reality, there is no way it can be enforced and will go down in flames if it is attempted.

The ONE good purpose served here is to hopefully spur a few more idiot holdouts to get vaccinated.

Funny how that works...

@Liberal: "We're not proud to be American. Also Liberal: Chooses to live in America anyways.

Thank you!
I just can't figure out why people who are so intent on turning this into Venezuela just don't move there?
Wouldn't that be so much easier?

And by the way: not even Cuba wants our Socialists. Cuba is Marching for their Freedoms now too!

Do you ever think that the founding fathers imagined a time where endorsing patriotism would be enough to label you as an enemy of the state ?"

The founding fathers would never have bothered with a Republic if they knew that "Fox News Sheeple" would evolve from the swamps.

Malace said...
debozio: "The U.S. Constitution doesn't matter if someone might get sick."

As a business owner who had to shut down when COVID over burdened our hospitals it’s mind boggling that other businesses won’t do their part to keep the spread down. Common sense - it ain’t too common.

@Rob in Manhattan, giving more un-wanted medical advice is typical from a NYC libturd.
What about the thousands of illegals crossing our southern border. Did they get the Jab ?

Trump told the truth about the sickness. The left deceived themselves.
Thw Demorats problem is fingers in their ears going lalala and stamping in a circle.
They made the cure worst than the problem to gain more control...

Prepare for food & other supply shortages, along with heavy inflation starting in the Fall. The writing is on the big wall. Don't be caught short.

Weak men cause ‘a helluva lot more carnage in this world than strong men’ – Nolte
The founding fathers knew this well. God Bless the United States !!!

"It just puts a target on you, or your operation"
You don’t have to read the tea leaves, just the writing on the wall.
When we fail in the U.S. WE ALL FALL TOGETHER demorats or rinos .

In 2021, anyone practicing basic common sense is now "far right."
Not like the constitution means anything...

"Far Right" to Demonrats is anyone who opposes their tyranny that's why they won't help my Cuban brothers and sisters !

The Dems have been abusing their power for decades.

You want to see a case of LOCAL censorship related to the vaccine and mask mandates?
As of Saturday:

LICpost with its 10 other newspapers is busy censoring an Op-Ed's comments so much, it has even woken up some of the WOKE!

An LICpost op-ed by Marvin Jeffcoat (date missing) who is running for City Council (R) from D-26 received nasty comments, but no positive ones on a piece focusing on support of the Constitution during emergencies. A response from Patrick O'Brien (8/24), a lawyer and former Chair of CB2 was disgraceful, but received no comments at all on LICpost until they were badgered to post four. One comment was Mr. Jeffcoat's reply. The SunnysidePost, on the other hand offered both articles with comments galore. Now the articles are being juggled so that they don't both appear on each site.

It finally appears as if comments on LICpost and its 10 outlets are being distributed amongst the sites and many are being "lost" as well to mask overall constituent opinions. O'Brien's piece was outrageous, but it was published. Why weren't ALL of the comments published? This may be why after all these years, LICpost, et al has not been able to create Community on their sites...they don't want one!

The irony? Mr. Jeffcoat, who is not an attorney, has a better understanding of Common Law which is based on the original 1776 Constitution. Why? Because Mr. O'Brien was taught Maritime Law in law school which is based on the Act of 1871. Thanks to our 18th President, Ulysses S. Grant, he sold us back to the British in 1871 and DC became a Corporation. This is not taught in High School Civics or Law Schools.

Look up the Act of 1871 and you will begin to understand centuries of misery and more recently our disappearing middle class. Why there are mandates without laws. And, why there is the threat of fines without laws to support them. Congress, the state legislatures, the courts have not had to work for We the People, they have been working for the DC Corporation. And they have let us to believe that this is the way our 1776 Constitution was meant to be!

Ever notice that your name is printed on your Birth Certificate, Driver's License, Passport etc. in ALL CAPS. Just like the name of a corporation.

A Maritime Law flag has gold fringe and is found all over DC, in Courts, Law firms etc. Our real flag has no gold fringe.

"If you want to know who controls you, look at who you are not allowed to criticize." ~Voltaire

It’s scary to know there are so many people that have been brainwashed by the Commies.

"As a business owner who had to shut down when COVID over burdened our hospitals it’s mind boggling that other businesses won’t do their part to keep the spread down. Common sense - it ain’t too common."

@ Dr.Rob in Manhattan...
Is the experimental gene therapy injection safe or effective ?

They'll be serving Chicken Covidilla on the menu.

"Liberal: We're not proud to be American"
"Liberal: Chooses to live in America anyway"

Yes some of these people are antiwhte and hate America and the west. Yes they still live here!!! Incredible their arrogance

Watch a commie in action braging about destroying America
https://www.youtube.com/watch?v=83b_u5V51U8&ab_channel=ProjectVeritas