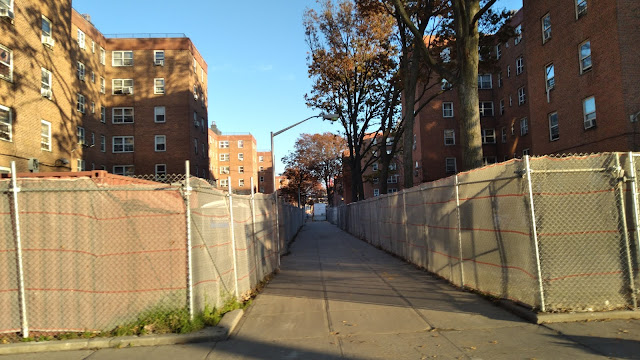 Last fall, city Housing Authority carpenters performing work at a public housing complex in Washington Heights made a disturbing discovery inside a tenant’s bathroom: black splotches flowering on what appeared to be a newly installed drop ceiling.

When they removed the ceiling, they found a thick coating of toxic black mold festering in the rafters behind it and covering the backside of the sheetrock.

A subsequent investigation revealed that a contractor had put up drywall over mold and water leaks in multiple apartments at the development. The examination found open mold and leak repair requests in 45 apartments — fixes the contractor had failed to address.

Another problem: The contractor who performed the inadequate work was affiliated with the private-sector developer that was about to take over management of the public housing development under a controversial program NYCHA is relying on known as Rental Assistance Demonstration — aka, RAD.

Behind the scenes, the alleged mold cover-up set off alarm bells. An investigation by THE CITY confirmed NYCHA officials quietly altered the authority’s protocols on all RAD transitions going forward, ratcheting up oversight of all properties that convert ,to private management under the program.

From now on, NYCHA said it would ensure that developers preparing a building for RAD conversion use only mold-resistant sheetrock. The developers will be provided with an apartment’s mold history — and NYCHA will follow up to make sure open repair requests are addressed.

“Due to this investigation, NYCHA has instituted better controls to protect against any confusion surrounding (RAD) conversions,” NYCHA management wrote in response to THE CITY’s questions about the mold issue.

NYCHA has made no public announcement about any of this, and it’s easy to see why: RAD has become a hot-button issue confronting the Housing Authority as it attempts to redress a history of negligence and remedy unsafe and unhealthy living conditions that have plagued many of its 400,000 tenants for decades.

Was that wallboard made in China?

Most of these NYCHA buildings were built poorly and maintained badly. It'd probably be cheaper to tear down and rebuild - if they have the money. Instead, they keep sinking money into fixing these Le Corbusier influenced towers in the park. They're just flushing money down the crapper to fix these toilets in the park.

That’s what you get when you rely on the private sector. Most contractors are crooks. Stick with city employees only.

Get rid of all public housing, or give people a 20-year limit.

If they cannot get their act together they should be sent to North Dakota where the locals can figure out some way they can be no longer a burden on society and be given gainful employment.

Their clumsiness and poor life choices should not be my or your problem nor a solution found in my pocket with money earned by my sweat and effort.

Prison? Work gangs. There is enough info out there that prisons do not work.

Any time public money gets spent on private industry you have to be vigilant in oversight.

Private industry sees public sector contracts as a cash cow. Their credo is “it’s not you money –it’s not mine”.

I worked as a per-diem sub in the public schools and later as a consultant for arts education there as well. In every dealing with vendors and contractors, they always tried to find ways of padding the bill.

The Board Of Ed had large in-house shops that maintained plumbing, HVAC and P.A. systems. These got cut back during the fiscal crisis and much of this work got farmed out to private interests.

In led to a mess of overbilling, log delays, companies bidding on too many projects and frankly, and plain old corruption.

The person who mistakenly stated that NYCHA house were built poorly is talking out of his backside.
The so-called “towers in the park” types are almost all fireproof and had to-code wiring and plumbing at the time of their construction. They are functional and some, a bit intuitional, but a world better than the shithouses the private sector would provide to people in low income levels.

The failures in NYCHA come from two main sources:

A revolving door of administrators who often just saw this as a stepping stone to private sector jobs.

And, SOME RESIDENTS who treat these buildings as toilets, places to sell drugs and just do damage.

Some childhood friends in public school lived in “projects”. I visit several and the buildings (Wald and the Grant Houses) were quite nice. All had elevators, community rooms, playgrounds and some units had great views. This was in the late 1960’s through early 70’s. At some point the city stopped requiring responsible behavior from the residents and things went badly downhill.

The City needs to get much stricter in enforcing evictions of troublesome residents.

The smell of weed intensifies as you enter Queens borough.

Get rid of all public housing, or give people a 20-year limit.

I agree with the limit. Public housing should be temporary use or for those who are TRULY physically disabled. It should never have been a pacifier for those lazy people who decided to never work a day in their lives or for criminals who just got out of jail to stay with their "relatives" in free public housing just so they can sell drugs. They should put temporary limits on how long one should be able to stay there. Just like unemployment too should have a limit and stop being so corrupt. But just like everything else in this city, the corruption will keep happening unfortunately because everyone at the top is corrupt as shit!

NYCHA The highest paid babysitters in the world.