Young woman from Williamsburg got vaccinated and got COVID anyway 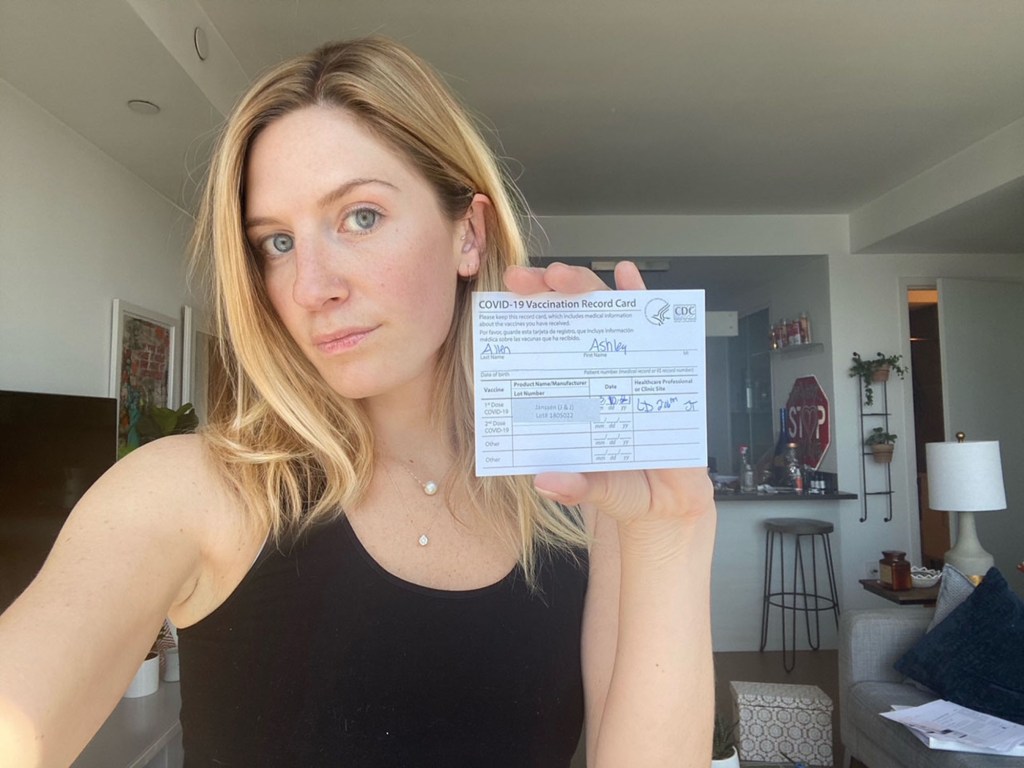 A Brooklyn woman who managed to avoid catching COVID-19 throughout 2020 went down with the bug this month — three weeks after being vaccinated.

Ashley Allen, 31, spoke to The Post by phone while quarantined in her Williamsburg apartment and in between calls from city contact tracers.

The contact tracers “started asking me questions about what I was doing three weeks ago,” Allen said. “And I said I was getting vaccinated.”

Allen was thrilled when she was able to book an appointment for the one-dose Johnson & Johnson vaccine at the Javits Center on March 10.

The sprawling convention space had just received new shipments of vaccine and was jabbing New Yorkers around the clock — Allen’s appointment was at 2 a.m. As a wine and spirits distributor, she was able to get a coveted early spot even while vaccines remained unavailable to most New Yorkers. Though she experienced a brief fever the next day, her side effects from the jab quickly resolved.

Even after Allen was vaccinated, she was careful to always mask up when outside and wash her hands frequently.

“On Wednesday, March 31, I started feeling like a scratch, a tickle in my throat of some sort. It was super dry,” she recalled. “Then I kept having this dry cough. It kinda felt like I had allergies.”

As her cough persisted, debilitating fatigue set in.

“It started getting really bad, to the point where I did go to City MD,” she said. “I thought I had Lyme disease. I spend a lot of time upstate.”

But a rapid coronavirus test on April 4, plus a second rapid test on April 5, showed COVID. A PCR test, which is more accurate, confirmed it.

The City MD staffer “asked when did you get your vaccine? And I said March 10, and she was like just shocked,” Allen said.

Allen’s case is rare, experts say, but not unheard of.

“The vaccine does not necessarily prevent you from getting COVID. It prevents you from being hospitalized or dying from it,” Dr. Kris Bungay, a Manhattan primary care physician, told The Post. “That is why we all still have to be careful.”

Update: Here's another one.

The best vaccine is not the one that you can get now.

A Brooklyn man found out on Monday that he’d tested positive for the coronavirus — more than two weeks after getting the jab.

Matthew Sambolin, 39, told The Post that though he opted for the one-dose Johnson & Johnson vaccine because it was “convenient,” he now wishes he’d gotten the Pfizer or Moderna shot instead.

“The risk was there, I was willing to take it. Now I’m wishing I made a different decision,” he said in a phone call from the spare bedroom of his Bath Beach home, where he’s currently quarantining.

Sambolin said he was experiencing minor symptoms, including a light cough and fatigue.

While a rapid test he took Saturday came back negative, a PCR test, which is more accurate, returned positive for COVID-19 on Sunday, according to documentation he provided.

“It was a shock,” Sambolin said of learning about his positive test on Monday.

An operations manager for two local radio stations, Sambolin said he had “no ambivalence” about the COVID vaccine and had been looking forward to getting his.

“I wanted to help get the herd immunity up,” he said.

I wont get vaccinated unless Trump comes back as my president !

The J&J/Jansen vaccine only has a ~66% effective rate. That means 1/3 of people who receive it will still be able to come down with COVID. It's protection, but it's not complete protection. Moderna and Pfizer have much better effective rates, but even an effective rate of 99% leaves 1 in a 100 susceptible. With hundreds of millions being vaccinated, expect lots more stories like this.

The flu shot scam applies to the covid shots also.

I Guess that means we have to fully lock the city down again.

This is getting very crazy.

Makes no difference. This scam was tried a few times. Coming down with COVID is the least of the problems.

The four major companies who are making these covid vaccines are/have either:

Moderna had been trying to “Modernize our RNA” (thus the company name)–for years, but had never successfully brought ANY product to market–how nice for them to get a major cash infusion from the government to keep trying.

In fact, all major vaccine makers (save Moderna) have paid out tens of billions of dollars in damages for other products they brought to market when they knew those products would cause injuries and death–see Vioxx, Bextra, Celebrex, Thalidomide, and Opioids as a few examples.

Pfizer has the distinction of the biggest criminal payout in history. They have lost so many lawsuits it’s hard to count. You can check out their rap sheet here. Maybe that’s why they are demanding that countries where they don’t have liability protection put up collateral to cover vaccine-injury lawsuits.

Astra Zeneca has similarly lost so many lawsuits it’s hard to count. Here’s one.

you get the point. And in case you missed it, the company had their covid vaccine suspended in at least 18 countries over concerns of blood clots, and they completely botched their meeting with the FDA with numbers from their study that didn’t match.

No Vaccines is guaranteed and you accept the risks when you sign for it.
It isn't complicated.
Dumbass likely got it at a bar. That or whatever event these hipsters use to party.
Has anyone walked by these hipster bars, coffee joints and so called "art events" ?
They don't give a shit, don't wear masks, dirty virus ridden beards and pack themselves together like can's of mixed nuts.
Don't believe one word of any hipster or Milliianials contact history, Why is this even news?

That's why I posted that picture of Domino Park. That was taken back in March around the time when that woman and surely all those upper class hipsters got vaccinated. A lot of people like to make fun of people in Texas and Florida and even recently in Whitestone for clustering but I've seen the hipster demo in Williamsburg and Bushwick have been violating pandemic protocols the worse. This woman and surely others believed de Blasio and the Health dept's irresponsible b.s. that the vaccine that's available is the safest too. It's why there is a NY strain now and they initially undermined that too.

The woman claimed she got it at the Target in Downtown Brooklyn while riding an escalator, so I think that's a load a shit too.

At Anon re: Vaccines.

Excellent synopsis. It also shows that Biden's initiative to vaccinate the nation has been a failure too.

As for the mask comment, just post some relevant scientific evidence that they do work.
Some folks having virus ridden beards is not really scientific...

I'm not anti anything, but this debacle is a world wide scam with serious ramifications for years to come. Follow the money....World Bank, IMF, Central Banks, WEF, UN, WHO all in on this new system...lets call it "covidism".

J&J owns a company that produces vaccines so this isn't their first. As for the fetal cells, they test it on fetal cell lines from an aborted fetus. It's not from the actual fetus tissue and this has been used for years.

We will only listen to God Fauci, let him confirm this.

JQ LLC, It's hard to be a saint in Impunity City said...

@Anon re: Halt J & J and @ everyone reading this blog.

I suggest watching de Blasio's press conference today at 10 a.m. on Channel 25 (or 10:15 or 10:20, you all know how tardy Mayor Big Slow is) and see how he fields this issue if a reporter brings it up, since the idiot recently opened up a vac site for Broadway stars.

And of course check the mayor's office you tube channel later on and see if it gets redacted from the upload.

"US will temporarily suspend J&J vaccine" that's code for Democrats unhappy with payoffs so far from J&J. Executives at J&J told that Democrats demand much bigger payoffs.

As for the fetal cells, they test it on fetal cell lines from an aborted fetus. It's not from the actual fetus tissue and this has been used for years.

Vaccine experts and manufacturers state that vaccines do not contain any of the original fetal tissue or cells, that the abortions occurred decades ago and replenishment with new tissue has not occurred. Although the vaccines are purified from cell debris, traces of human DNA fragments inevitably remain

J&J denied that its products ever contained asbestos and insisted that they do not cause cancer.

What is the name of the company then?


Johnson & Johnson (J&J) has acquired Netherlands-based biopharmaceutical company Crucell for close to $2.4 billion dollars, moving J&J prominently into the arena of vaccine development, according to a company press release.

Crucell has a robust preclinical research program, and also licenses a human cell-line based manufacturing system for high-yield, large-scale production of vaccines, recombinant proteins and gene therapy products. J&J is a relative late-comer to this area of development

Crucell. There was no J&J vax.

oh Papa Joe, save us. you're our only hope.

Joe Biden is a Serial LIAR
Joe Biden has spent his entire career flip-flopping on the issues. He lies at every turn of his career. As a student, he lied his way through college, nearly got himself expelled, pleaded for a second chance after getting caught plagiarizing in law school, and then did it AGAIN on the campaign trails. As a senator, he consorted with segregationists and lied his way through Congress. And now as President? Same old Joe. WATCH more Mark Levin: https://blazetv.com/levin

I could get Covid again, it could kill me

I could get the vaccine, get Covid again, and it could kill me
�� Hmmm, tough decision

I took the Amish vaccine and just turned the TV off. Suddenly no covid

Let the class actions begin oh wait the companies are exempt from liability.

Nah, it was you. Too many drinks.

I wish for the unfettered free days of past !

It's not from the actual fetus tissue and this has been used for years.


Yeah right. You must work for J&J or some other murder/genocide firm.

Here chew on this

She doesn't look that young,her hipster days were over before covid.
Probably a bartender for the new batch of hipsters