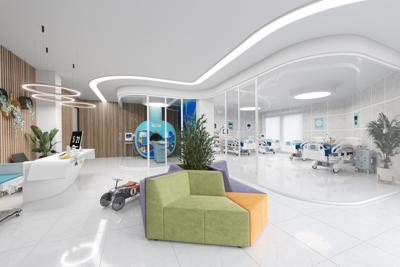 A mixed-use building that is part medical center and part hotel is on track to open in the next few months, developers recently announced.

The medical center will incorporate the hotel amenities into its patients healing process. Those staying in the healthcare facility will be offered access to an indoor pool, spa and fitness center, as well as a Michelin-rated restaurant and bar.

“Eastern Mirage Medical Center incorporates the most advanced technology available to hospitals today, along with a more welcome, hospitality-inspired setting,” Richard Xia, president of Fleet Financial Group, said in an April 8 statement. “By creating a symbiotic relationship with the building’s healthcare facility and luxury hotel, we hope to create a steady flow of visitors to both businesses.”

According to Fleet Financial Group, the medical center will utilize cutting-edge amenities, such as a five-layer curtain wall providing enhanced sound insulation and natural light, as well as environmentally friendly materials and systems, high ceilings, and Turkish marble floors.

Patients will have an almost completely touchless experience, as well: The center will use facial and voice recognition features for offices and elevators.

The plans for the building — which will be the tallest in Flushing — also include more than 34,000 square feet of outdoor place, including an all-glass roof terrace with a panoramic view of New York City.

Just in time for the luxury jail tower being built

This is great for the CCP and the Chinese birthing industry. Expectant mothers can come straight to downtown Frushing, no need to stay in some slumlords SRO. Jump in a uber at JFK straight to the hotel and birthing center to have your American citizen baby and straight back to China. What a fucking scam.

Anonymous #2 - you got it half right - but no bodies running home to China. It’s chain migration heaven- they all get double and triple dipping on welfare, Medicaid, WIC etc by changing around their names. Li Po Xian becomes Po Xian Li and Cain Po Li. No one at HRA can “figure it out”.

"Grand Hotel... Patients come, patients go, and nothing ever happens..."

They have been building this place since 2008. There is no Zoning Diagram, and, yes, there is a partial SWO on the site:

Someone should look into this BSA Variance mentioned here http://a810-bisweb.nyc.gov/bisweb/BScanJobDocumentServlet?requestid=4&passjobnumber=410213219&passdocnumber=14&allbin=4610564&scancode=ESHS5133629

Why should Chinese babies be born in China? Are you some kind of racist
We own America and you live her because we let you,don't forget.

Why should Chinese babies be born in China? Are you some kind of racist
We own America and you live her because we let you,don't forget.

Sorry, America was not built on Chinas back. We might owe China money but without the USA, China would NEVER have succeeded on their own. China gets rich off of Europe and Americans ideas. Thats the only reason they got rich, not to mention that they failed to curtail their population so now there is like 1.5 billion Chinese worldwide. Sorry that Europe and Americans were dumb enough to try to stop the human population from ruining their countries.