Denial is not just a river in Egypt 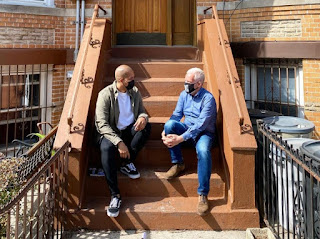 Van Bramer said in an email from his borough president campaign that he is standing by Ardila.

“The words he used as a teenager were reprehensible,” said Van Bramer, who is gay. “He has taken responsibility and apologized to me personally and to all rightfully offended and hurt by that language. I believe Juan when he says he would never use those words again and that they do not reflect the man he has become.”

Teenager? The last homophobic comment on his Facebook was posted 7 years ago when he was in college.

A spokesman for Gianaris declined to comment. Richards’ campaign did not respond to a request for comment. Nor did Ramos’ office, nor the Stonewall Democratic Club.

Of course! What could you possibly say in defense of endorsing someone who exemplifies the opposite of your lame virtue signalling reputation?
Posted by Queens Crapper at 4:21 PM

What were his anti-semitic words?

“It’s not surprising that Mr. Ardila is so desperate to distract from the hateful language he was caught posting as recently as when he was 20 years old and certainly not a kid, that he’s lying about Councilman Holden’s spotless record of public service to all New Yorkers,” Ryan said.

QNS was not able to verify Ryan’s claim that Ardila posted those comments when he was 20. According to screenshots published by the Post, the comments were made 10 to 11 years ago. Ryan did not provide evidence of such comments.

This from QNS. Angelica Acevedo must be too busy following the RTU and BLM around to do any investigative journalism herself.

@Unknown. You mean where Ardila. wrote: "Every Juan shits on a Jew"? Nice, no? I'm sure Nussbaum, the Queens Eagle publisher, and head of the Queens Jewish Community Council will shortly weigh in on this.

"EVERY JUAN SHITS ON A JEW." Ardila's campaign literature?

Prove me wrong said...
We ended racism. The Left needs it, so it has brought it back.

There’s a couple more references but yes, shitting on Jews I would think is generally pretty inflammatory.

Hey George, notice that one of Juan’s chief cheerleaders, Nussbaum’s lefty social worker-turned-journalist, David Brand, announced his exit from the paper just before this came out. Just a coincidence but a convenient one nonetheless.

Here’s a good one: Juan was publicly knocking gays in 2014 when his biggest supporter, Raquel Namuche, leader of the Ridgewood Tenants Union, founded the organization, which has a good percentage of LGBT people as members.

Since you can be appointed to community boards in NYC at the age of 16, you must be held accountable for things you said when you were a teenager if you run for office or want to be appointed to a board. That’s the current reality.

Ahhhhhhhh I never tired of their funny DeMoRaT shenanigans.

Believe me, if he was white, there would be outrage

This miscreant Juan Ardila would NEVER stand a chance of being able to even make the ballot in Joe Crowley's Queens!

So, does Dem boss Meeks approve of Ardila's blatant anti-Semitism?

"Believe me, if he was white, there would be outrage"

Juan Ardila would be deplatformed if accused of sexual harassment...

Will Juan Ardila would be deplatformed ?
Nope he's excempt from that !