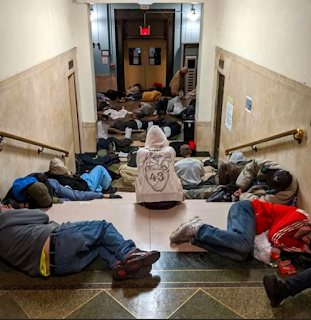 The number of single adults living in homeless shelters across the five boroughs reached an all-time high during the pandemic, likely contributing to a disproportionate spike in coronavirus deaths among that population, according to a new study.

The study, conducted by the Coalition for the Homeless advocacy group and provided exclusively to the Daily News before its Wednesday release, found that the number of single adults sleeping in New York City shelters rose precipitously throughout last year, reaching a new record of 20,822 on average every night this past February.

Through the same reporting period, the COVID-19 death rate for sheltered single adults was 54% higher than the citywide average, the study says.

Giselle Routhier, a policy director at the Coalition for the Homeless, said many homeless single adults suffer from underlying health conditions and acknowledged that may have partially contributed to the high coronavirus death rate.

“That means more people were at risk,” Routhier said in an interview. “We saw how that impacted them in these really devastating mortality numbers.”

Wear seven masks, spread those cheeks, don’t talk, 15 years to slow the spread.
Then You then can have a BBQ in July !

Give them your house Leftist, show us how woke you are !

Pray for our country. We need it

We are starting to get into Soviet approval territory.