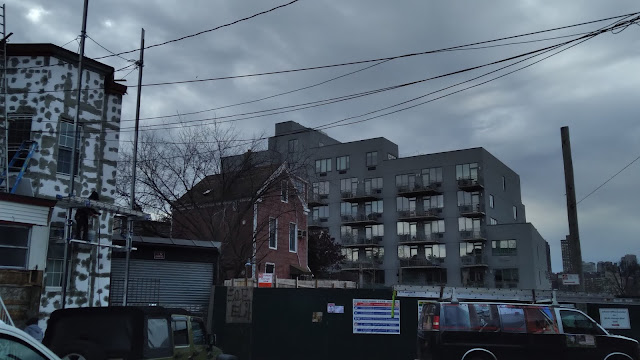 Thousands of residents fled western Queens in 2020 amid the COVID-19 pandemic, according to a report published by the real estate group CBRE.

The report — which analyzed 29 million USPS address changes across the nation — found that nationwide people last year vacated large, costly cities in much bigger numbers that in previous years.

The nationwide trend rocked New York City. When the city became the epicenter of the pandemic, New Yorkers left in massive numbers. The Big Apple was second only to San Francisco in terms of the number of people who left large cities last year.

In Queens, most neighborhoods lost residents in 2020. Though the same was true in 2019, the net losses were significantly higher.

Taken together, more than 21,500 residents left the two neighborhoods in 2020. However, on a net basis– people moving in and out– the number approached 7,000.

Many large residential towers in Long Island City saw their occupancy rates plummet in 2020, The Real Deal reported in January.

For instance, the publication reported that the occupancy rate at the 1,871-unit Jackson Park development, located on Jackson Avenue in Long Island City, declined from 96 percent in 2019 to 59 percent in September 2020.

Spurred by the pandemic, many residents ended their leases and moved to suburbs with more outdoor space when the city was largely shuttered, according to the authors of the report. This trend, however, is beginning to reverse.

Both Long Island City and Astoria have a high percentage of adults in their 20s and 30s, census data shows. Many are young working professionals, a group prone to moving, according to the report.

“The increase in moves in 2020 was driven by young, affluent and highly educated urban dwellers,” the CBRE study states.

Does this mean our developer overlords built all these towers for nothing? I'm outraged.

I love New York, Queens and always have. Always will.
The scumbag politicians leave no alternative to many folks.
They literally terrorize businesses, never ending regulations, laws, rules and of course fines - we all know is about revenue after their socialist policies have failed.
Goldman Sachs is leaving. Does that tell you something?

As for the little guy, is worth watching.

WHO REALLY wants to live in a dense urban area that isn't even Manhattan? I guess you grin and bear small and overpriced housing to be IN MANHATTAN, but to not even be in the center of the action?

I also think higher earners are realizing that even with higher property taxes, they do BETTER in the suburbs without the NYC income tax. And have far more town/village benefits!

Even if, God forbid, they ROB you IN MANHATTAN..

As Cuba proved years ago. Nobody really wants to live in a socialist paradise.

So it's just hipsters leaving, not actual New Yorkers like the article claims. AOC's entire voting base got up and left as soon as things got hard.

What, incessant talking about food, living next to the elevated train in a thin-walled building built by the locals who pulled all the amenities once it got filled, going to a street fair that has a Chinese singing group and a Honduran folk dance ensemble doesn't appeal to you!

Astoria should be left only to those who talk about mean nuns and shiny cars.

Who wants to live in a shithole city where the criminals are lauded as heroes and the cops are vilified as criminals. Welcome to the New New York City and state. Where lawmakers coddle and protect criminals and could give a shit less about law abiding and tax paying people. People you are being led like sheep to slaughter.
Wake the fuck up and get out while you still can before it's too late.

Hipsters never put down roots to start with. Tough to take a place seriously when the locals talk about food and cars. And the good old days. They have no one to blame but themselves.

The place is primed for a demographic shift. Last summer was a hint of the future. That plus the new real estate signs you can't read. AOC is here to stay.

Everyone bought houses in long Island. Just wait though when all their "remote work" gets outsourced in a few years, then they won't be able to afford their high property taxes and the huge mortgage they have. All the idiots moved to long Island and are probably going to get a rude wake up call in about 2 to 4 years when their employers start moving their jobs to India and the Philippines. Then they will be begging probably to go to back to the city since now they have to find a job thats actually physically in the office once again...its only a matter of time.

I suggest that the refugees from Astoria and LIC try Bayside, Douglaston or Little Neck for lower density (but not remote) living

Maybe, just maybe folks are leaving, because of this?

What do you say Bored?

That plus the new real estate signs you can't read. AOC is here to stay.

Trust-fund Hipsters almost always have English as their first language. Who else is voting for her? The 'Latinx' in the Bronx don't seem to care much for her, compared to Virginia Joe.

"What do you say Bored ?"
Nothing Bored was out for 420 Day blowing out what little brain cells he has left !

I noticed a lot of comments about AOC and her actual base of upper class hipsters who bailed on the city when the going got too tough for them, but it should be noted that she does not represent these two towns in the house, Carolyn Maloney does.

The hyped up rent drove them out.
An almost Manhattan nabe anyway!

"WHO REALLY wants to live in a dense urban area that isn't even Manhattan?"

The trustfunders from west of the Hudson river like these areas, they do arts and bullshit nobody will pay them one cent for till the money runs out, then try waitressing and real jobs to pay the rent, find real jobs "too hard" then move back home. That's what appears to have happened in Bushwick & Astoria and now LIC and Ridgewood all along the JMZ & L train .

Overpriced real estate. In reality you can get better deals in Manhattan proper these days.