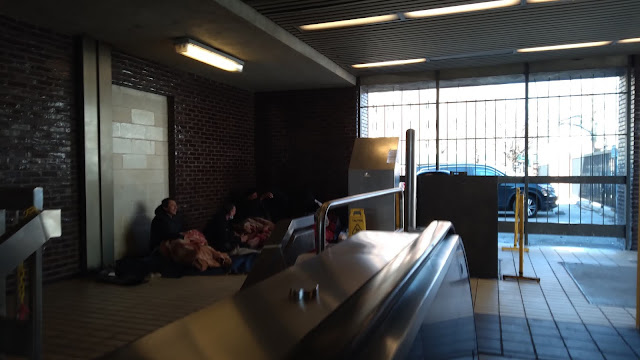 Most New Yorkers living on the street and subways have been through the city’s shelter system — and don’t want to go back, according to a new survey of 200 “unsheltered” city residents.

More than three-quarters of respondents from all five boroughs — 77 percent — said they had stayed in the shelter system before and opted to return to the street, according to the report released Monday by the Coalition for the Homeless.

Of those who eschewed shelters, 38 percent cited concerns about their safety while another 44 percent blamed city social workers for being either inefficient, overly-controlling, inattentive or disrespectful, the report said.

“No discipline, security don’t do nothing, food sucks, feel like I’m in prison, no love,” one survey respondent said of the city-run system.

“I’m a human being,” said another. “I don’t want to be treated like an ASPCA mutt.”

City social workers, meanwhile, had approached 84 percent of the individuals surveyed. Yet three-fifths of those approached refused the services offered by the workers — usually a trip back into the shelter system.

Fifty-three percent of respondents said they need real housing to get off the streets, while 26 percent also cited jobs and income.

Survey respondents were approached while living anywhere from subways stations and sidewalks to parks and office building atriums.

Their answers suggest New York City’s street homeless “see the sacrifice of their safety, dignity, and agency as the unacceptable cost of entering the shelter system and so they are left with no choice but to bed down in public spaces,” the report argued.

Update: George The Atheist reporting from Woodside on the city's homeless policy failure 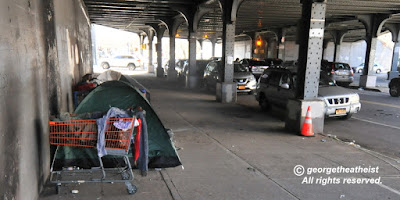 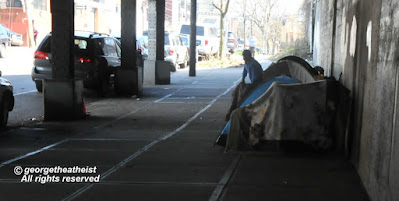 Yet let more illegals in left n right. The hypocrisy is palpable.

Put all the homeless in the empty office space and Hotels in NYC !
Then get back to us in a year and see if it works out !

Sorry, but it’s a waste of time to care about people more than they care about themselves.

Shocking that the shelters are unsafe. Ask mayor Debozo and his lovely wife will tell you otherwise. Ask the people of the shelter hotel on Queens Blvd in Kew Gardens what fine upstanding clientele were housed there. The whole system is a money pit for politically connected individuals to get very rich.

Loads of huge 200-1500 room HOTELS up ins Ulster and Sullivan county completely empty rotting away. Out on 100s of acres in the boonies where they wont bother anybody and if they escape the bears, feral Russian boars and coyotes will eat them. I think its called the former Yiddish Alps. Pay the Jewish slumlord owners commercial tax on these huge property's and they will be glad take all these people. Most have big indoor and outdoor swimming pools, huge kitchens & cafeterias too !!
Problem solved

That's a reasonably good idea. Why don't we do that? Seems like it would be healthier for everyone involved.

Yes, well except the residents of Ulster and Sullivan don't want us.