NYPD unleashes their own dynomutt in public housing building 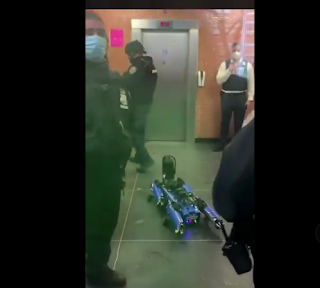 A viral clip of the NYPD’s new robotic “Digidog” had the internet chasing its tail over whether the dystopian “future” of science fiction has already arrived.

“By the time my kids are old enough to watch Black Mirror it’s going to be a documentary series,” Twitter user @hella_leigh posted Tuesday along with the video, which shows cops ushering around a robo-dog during an arrest at a city housing project.

“I never seen nothing like this before in my life. You seeing this?” asks the woman in the original TikTok video.

An NYPD rep said the clip showed the arrest of 41-year-old Luis Gonzales after police responded to a 911 call regarding a domestic dispute and possible firearm and hostage situation at 344 East 28th Street in Manhattan.

This is only the beginning. For all we know, there might be more of these fucking droids coming down the pike thanks to President Biden’s stimulus funding and also with protests that are sure to come up during the summer and de Blasio and Shea would want to get more of these little buggers following demonstrators around and grabbing their features and logistics.

It’s uncertain if the NYPD’s Dynomutt is going to do anything about the widespread crime that is raging from gang warfare and attacks from mentally ill people prone to violence wandering around on the streets. Mostly it’s just another annoying distraction from the troubled recovery for all of us here in New York City, albeit one that will probably fundamentally change how we think about our liberties and the safety the NYPD thinks the citizenry should sacrifice them for.

"ROUND UP THE USUAL SUSPECTS!"
Yes the Fake News media !
They lie, spit it in your face and yet most don't care !
Russia Russia Russia.....It was a Hoax !
https://www.youtube.com/watch?v=n3Z9_Xs-8sA&ab_channel=Timcast

Now the NYPD is getting their ideas from Doctor Who.

Robo Cop would be a better option.

The politicians don't want police, this will be perfect for them robocop and robodog. They are are lot cheaper and can be programmed with the politicians views on crime. No pensions, healthcare and no paychecks. If you ask mayor DeBozo there is no crime in his utopia. Everything is perfect in this shithole city.

And if the robocops should arrest people of color, they can be reprogrammed of their racism and arrest only people of certain racial persuasion. Perfect solution and BLM.

Not a peep about the daily shooting and murder of mostly minority people in this city, but we manage to freak out about an unarmed robot that can be used to safely see what is going on in a dangerous situation. This makes it safer for both the police and the criminal, as the police are not going in blind and can talk to the criminal and maybe get him to surrender.

I wonder does it spend all day sitting on its ass and staring at its phone just like a regular cop?

@Bored Welcome back bud.
What a surprise your mind is still cloudy !
Still watching CNN ?

I wonder does it spend all day sitting on its ass and staring at its phone just like a regular cop?

To be truly authentic, I guess it would have to only bite black people.

My Mom taught us that idle minds/hands are the devil’s workshop. I wonder if she suspected that someday the devil would actually fund people so they could remain idle.

This exact product/device is a regular sight in Singapore parks. It is used to remind people to keep apart and practice 'social distancing".

Over here I doubt you'll ever see it without cops nearby. It would be bricked or otherwise vandalized within the first few uses.