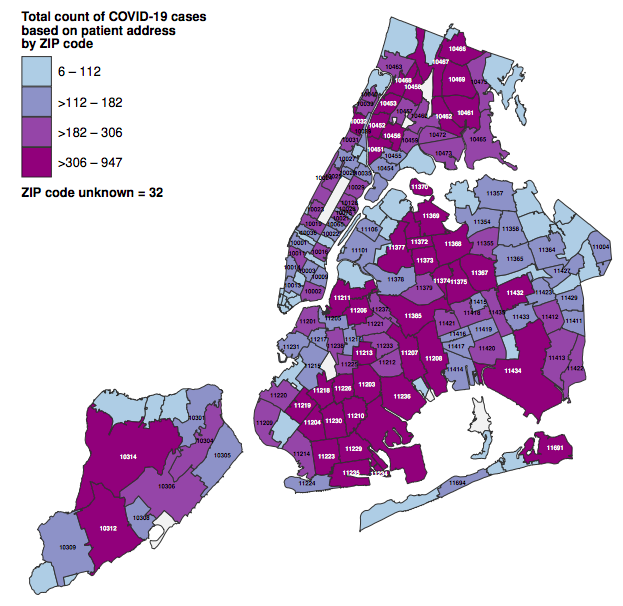 The zip codes with the most cases are colored deep purple and there is a big window of the amount of cases and the tabulations don't even start at the following number (112 should be 113 and so on). Even during a crisis, the city still can't help being easily subjected to ridicule.

Update: The NY Post corrected the glaring errors and confirmed the effects the pandemic has had on lower income working class residents.

A new city map showing confirmed coronavirus cases based on patient address by ZIP code suggests the poorest New Yorkers are being hardest hit by the pandemic.


Wealthier parts of the city, including much of Manhattan, waterfront sections of Queens and brownstone Brooklyn, have the fewest number of coronavirus cases, according to the map released by the city Department of Health.


A stark example of the wealth gap is the Rockaway section of Queens. The richest part of the peninsula that incorporates Belle Harbor where homes sell for over $1 million has at least 112 cases while Far Rockaway with its public housing complexes has up to 947 cases.


Those maps showed ridership plummeting in Manhattan stations in mid-March, while New Yorkers from the outer reaches of the outer boroughs continued commuting.


“Over time we start to see the effect of the fact that Manhattan and the inner zip codes of Queens and Brooklyn have a lower positive rate because they were able to bend the curve before the outer boroughs,” Donnelly said.


Neighborhoods with fewer than 200 cases — like Park Slope, Brooklyn and Greenwich Village in Manhattan — count many white-collar professionals who can telecommute as residents.


“I think the clear next step there, is if that’s true, then there’s a real socio-economic inequality, inequity in the fact that these ZIP codes, which also tend to skew lower socio-economic, are also going to be the ones who are harder hit by this pandemic,” Donnelly said.

“Broad strokes, those tend to be the wage workers, emergency service workers that are exposing themselves more and more over time,” Donnelly said.


Many front-line workers, from grocery store clerks to EMTs, live in the outer boroughs. Their jobs require them to use the subways while the majority of New Yorkers stay home.

Looks like there might be a need for a general strike to stop this contagion from spreading even more.

And at this moment as I am typing this, de Blasio's Department of Health still hasn't fixed those numerical errors.

Find it difficult to believe that things seem off the charts with the Chinese community in Brooklyn, but not in Queens - especially after usual mob scene for Lunar New Years.

The only people responsible for this virus are the Chinese Communist Party. And anyone telling you different is doing their bidding.

If youre going to complain about a city map, at least complain about legitimate things, or do you not know how the greater than/less than signs work?

Its pretty clear from what you wrote that you dont understand geospacial grouping of data.

That grouping you speak of is a good way to juke the stats to your favor. Just like this map does.

Even a major newspaper thought that was bullshit too.

And by the way, the city still hasn't updated the map for April 1, as every newssite does everyday.

If these numbers were real, then American polls are real and diversity is our strength lol.

No breakdown of covid 19 ventilator patients by race ethnicity age medical health etc just like after 9/11 NYC supports diversity even if it kills you.

There are plenty of references that its particularly rough on immigrants but then states that they make the backbone of cleaners and delivery people to deflect any comments about status, habits, or lifestyle.

Now, what is about to happen in Mexico, though, might be something to watch.

Curious thing is no much on the Asian community in Queens. Would like to know how that rooming house (covered by Crappy a few weeks ago) that Koo is taking public money to build votes, eh sorry, sustain is doing.

Coronaviris is retaliation for Trumps TARIFFS

The REAL conspiracy theory is that bats
- developed a completely new virus
- left their deep caves high on a mountain
- flew 600 miles to a crowded and polluted city
- then peed on a bunch of people
- who just happened to be right next to China’s only Level 4 bioweapons lab.

Sounds logical yea I could see that.