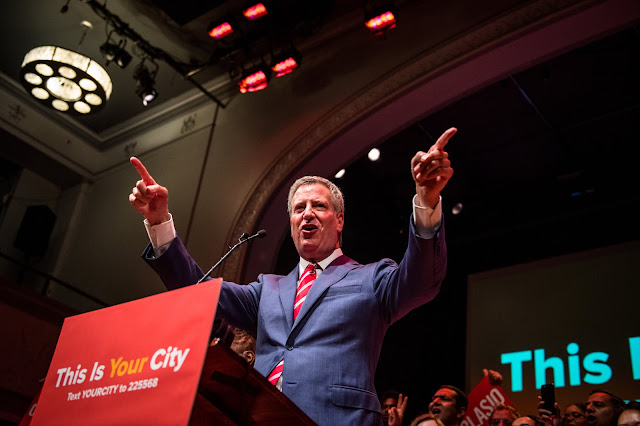 Mayor Bill de Blasio’ signature affordable housing plan, already troubled by a string of setbacks at the start of year as rezonings encountered roadblocks, is set to take another big blow.

The mayor has proposed cutting $583 million from the plan’s budget for the fiscal year which ends June 30 and another $456 million next year, Politico reported. The de Blasio administration says it will compensate by adding just over $1 billion to the budgets for fiscal years 2022 through 2024.

“The agency is taking a hard look at the projects in our pipeline and working creatively with partners to find additional sources of financing to move our projects forward,” a spokesperson for the city’s housing department told Politico.

“We understand that affordable housing will be more important than ever on the other side of this crisis, which is why we are advocating for more federal resources to support our push forward.”

All those open streets aren't going to pay for themselves.

What are the odds some of these streets never reopen

That's the point and the plan.

https://www.youtube.com/watch?v=ixuBCal7aZM
It seems the numbers are far higher than discussed - Dean of Harvard Med School.

The Democrats seem stuck in January with the Gov of Calif demanding illegals get subsidies while American citizens wait weeks for the right unemployment form to get posted, homeless can ride the subways with commuters in rush hour, and the Dem nominee, after many months of debates is down to an addled old man sitting in a bunker fighting sexual assault charges. Oh yes, they want to shut down streets for bicyclists too. Important no? I guess the real question out there is when the food shortages start, money runs out, and crime starts to spike, what do we do about Elmhurst, Corona, and Flushing basements and flophouses.

@#1"What are the odds some of these streets never reopen" Good we need Green Space !
@JQ LLC "people rage just as well" Where from their Cell Phones on Twitter or little blog sites like this one ? New Yorkers voted this City council and Mayor in because they want shit like this. The War on cars in NYC has been won !

Horse and Buggies are gone, Trolley Cars are gone next will be Automobiles in some locations in NYC. Change is always going to happen.

Two points on why Trump (undeservedly) could win:

NYC botched the Covid19 response. Take NYC out, and the US has a rate that is comparable to Germany. Mayor DeBlasio and Governor Cuomo deserve much of the blame as they are as inept as Trump,- Cuomo's order that Care Homes accept Covid Positive, infectious seniors has caused over half the deaths. That he is not called out on that is malfeasance by the Media. 8K people died due to that- no one has died of Lysol.

Opponent - Trump is facing a weaker opponent than Hillary in 2016. Watching the spectacle of Biden trying to focus for longer than 10 minutes is sad. During the Democratic Debates - Biden was the weakest of the 15 people on the stage. The Democrats need to high turn out in African-American communities, the young, and a reversal of Working Class votes. I can't see a incoherent, 80 year old Biden doing that. For 30 years it was noted that Biden had an odd behavior around women (read it in the a NYT profile during the Anita Hill hearings), and I think the Reade Story is the tip

Good point Anon. Do these clowns really think everything goes back to normal after the all clear? De Bozo really think there is going to billions of dollars to build four new prisons? To fix the BQE. To build his stupid BQX? Free baby sitting for all oops I mean universal Pre K?
These clowns will never wake up

A reluctant realist, likely an Obama voter(globalist,but not socialist) wrote:

President Trump will win because he has common sense and Americans can see this.

He called this virus right from the start, as a bad Flu, suggesting that we should move ahead (as we always have with 60,000 Americans dying from Flu in the 2016-17 season alone, but nobody saying shit about it).

He called it right when he started shutting down flights from China in January, when democrats were knee-deep in attempting to remove him from office (has everyone seen the new evidence of FBI higher-ups actually stating that they would frame General Flynn from the start? watch for the indictments from the Durham investigation.)

He called it right when he stated that NY would not need 40,000 ventilators but Governor Cuomo kept insisting that we were in a Pandemic without equal in history.

He called it right when he started pointing the finger at China, where this virus started in a lab or in a bat-head-soup market, whichever story line you prefer. We know it started there because they closed off the entire city to incoming flights and all movement....but were sure to keep the airplanes flying out to Western capitals including NYC.

We're not stupid, contrary to what Democrats would want us to be; stupid, subordinate and in a perpetual state of victimization.

President Trump will win re-election in November because New York is an example of what happens under Democrat mismanagement for 14 years (Spitzer, Paterson, Cuomo, deBlasio), while Texas and Florida under Republican leadership have approximately 1,950 Covid-19 deaths with a combined population of 50,000,000.
That averages out to about 45 deaths per million of population, much better than Germany, for example, at 77 deaths per million of population.

He will win because the Democrats have decided to side with China in this, attempting to blame the American President and our nation for what has always been a Chinese Virus.

Previous Anon: There will be money for prisons and for infrastructure as the Federal government is likely to step in and declare martial law in NYC.

There is little doubt that these guys running things are in no sense equal to the task (the disgraceful subway/bums is Exhibit A) and once the city falls into chaos with no food, high crime, bankrupt boarded up moms and pops, fleeing residents, and rent in arrears there will be nary a whimper when it happens.

The hoot will be when they start to clear out the basement rabbit warrens and flop houses. Riots will ensue when the welfare programs are cut. A generation of Lefties will vanish overnight. Oh I hope I am wrong. Very very wrong.

QC Reader said...
Thank You Harry and you too JQ !
Like the way that sounds Comrades...

Reap what you sow said...
"Flushing basements and flophouses."
It was Tony Avella who tried with others to stop it but the leak in the dam could not be stopped without help from the Queens sheeple.