Not so essential construction continues during state shutdown, including the Target in Elmhurst 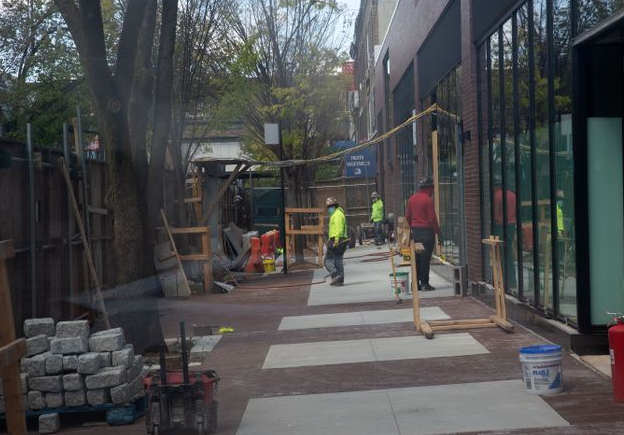 THE CITY
The list of “essential” construction projects and permitted work has ballooned sixfold since Gov. Andrew Cuomo announced a virtual construction shutdown last month, Department of Buildings data shows.
Some 4,936 job sites are now allowed to be worked on, up from about 800 on April 3, according to the Buildings Department.
Among them: hotels in Manhattan and Brooklyn, a new Queens Target, and, as the Columbia Spectator first reported, the future home of Columbia University’s business school.
The greenlighted projects also include renovation work on rental buildings under an exception for a “sole worker,” raising concerns for tenants.
Under a revision of its original shutdown guidance, the state has expanded “essential” building work beyond primarily infrastructure projects, hospitals and affordable housing.
As long as ground already has been broken, construction now can also proceed on any type of business that’s allowed to continue in-person operations during the state’s coronavirus-driven “pause.”
That broader list includes hotels, restaurants, convenience stores, banks, appliance stores and storage facilities, among other businesses. Public and private school construction is also permitted.
One worker on a Manhattan hotel project fumed, saying his bosses were treating the pandemic like “a joke.”
“To make the hotel essential, they might as well open every job, because that hotel is far from essential,” he said. “That hotel is deemed essential while we are deemed expendable.”
The city’s rules for “essential business” construction appear somewhat narrower than the state’s.
Work on “essential businesses” can proceed only “if it pertains to alterations of existing buildings and has been permitted by the department prior to April 15, 2020, the city guidance says.
DOB notes that the vast majority of the 35,000 sites that were ordered shuttered in March are still closed. But some local residents say they’ve been shocked to see work going forward on a wide-ranging set of long-term projects while the pandemic still claims hundreds of lives per day.
The far-from-complete Target site in Elmhurst, also slated to contain a Starbucks and a Chipotle, will eventually house some type of “ambulatory diagnostic treatment or healthcare facilities” above the 23,000-square-foot big box store, city filings show. So the Department of Buildings is allowing construction to continue.
Patricia Chou, a member of the grassroots community group Queens Neighborhoods United, which has long opposed the development, said that while a medical office may be in the offing, the core of the planned facility is still a shopping center.
“Our primary concerns are that they are endangering workers at the site and exploiting loopholes to complete this project,” she said.

AOC "ANTI AMERICAN, ANTI WHITE COMMUNIST" formerly known as bartender is out of her mind.
AOC Calls For REVOLT After Economy Reopens Proving Many Leftists Are Spoiled Children.
She's an idiot. I'll be glad when she goes back to bartending.

Aoc: don’t go back to work!
Farmers: you sure?
Aoc: yes
People : starving
Aoc: this is a result of systemic racism.

Hope everyone is enjoying their free trial of Democratic Socialism

Here's a silly idea for the idiot mayor:

How about getting every worker who wants to work to fix every road and pothole that needs repair on the BQE, the Belt Parkway, the Cross Bronx Expwy., the FDR Drive and every other major roadway that continuously causes commuting nightmares.

Now is the time to clean the shoulder areas of all the roadways, clean up every rat-hole infested are of NYC parks.

Now is the time to do all the subway track work that needs to get done, while nobody's using the subway.

All this work can be done outdoors with workers using simple bandana style masks.

What is a essential worker ?
Feeding my wife and kids is essential to me !!!
AOC Says Workers Should Refuse to go Back to Work...Because Capitalism is Bad or Something ?
Starving on the streets in the name of glorious Socialism !
And New York Voters put this dim wit nincompoop bartener in office !
New York you are a freaking joke ...

Who cares. Let's ALL go back to work. Enough already!

You wanna go back to work? You heard the Gov, get an essential job you hog licking cow scrather nincompoop

Agreed,
The recent random testing in NYC proves what I've been saying from the start:
This virus has been here since January and it's already gone through the population like wildfire.
The random sampling of New York City dwellers this past week revealed approximately 20% of people had antibodies to the virus.
Which means they were infected and didn't know it.

This also means something else; that the Infected Mortality Rate is much, much lower than the hysteria was sold on.
Remember the 3-5% mortality rate meant that "millions of Americans would die".
So we shut down the economy and are destroying our way of life. People are losing their life savings, their family businesses and idiots like Ocasio-Cortez (the bartender from Westchester) are pushing Socialism as the remedy.

No, the mortality rate of the virus is going down as fast as the economy, and what that reveals is that the scientists were all wrong and the hysteria-hyped democrats were wrong. And Trump was right.
The virus is basically a bad Flu (only it doesn't kill as many people as the Flu). It overruns our meager hospitals in NYC because our city has been mismanaged for close to 8 years by this idiot mayor.
Half of all the deaths from this virus are in New York. WTF? does this virus selectively go after New Yorkers?
Texas has 30 Million Americans and 500 deaths total.

Time to get the F back to work and stop the bullshit.
We have the ventilators, we know the virus goes after the old and infirm mainly and the Summer is coming. Time to go back.

The studies from the government's Science and Technology Directorate show that the virus dies with more sunlight and more humidity. That's called Summer in most places.
It's also why there's little death in South America and Africa and other warm climates like India.

Time to use science to our advantage and stop allowing Democrats to ruin our entire way of living while siding with Chinese propaganda.

@More prevagen said...
Feeding your family and paying bills is essential to most.
Unless like you who still live with Mommy ya mother-huggin' Jell-o mold hood-winked britch dem soiler !

Anonymous said: "... idiots like Ocasio-Cortez (the bartender from Westchester) are pushing Socialism as the remedy."

Why not? She's still getting paid $174,000 to live in luxury in D.C. She also has lulus coming to her. This is what Progressive Socialism, a/k/a Communism is all about. Those at the top take from those at the bottom and when nothing is left for those at the bottom, they tell us to shut up.

Thank you Democrat Party. We needed that slap upside our faces.