Queens is about to get their own Potters Field 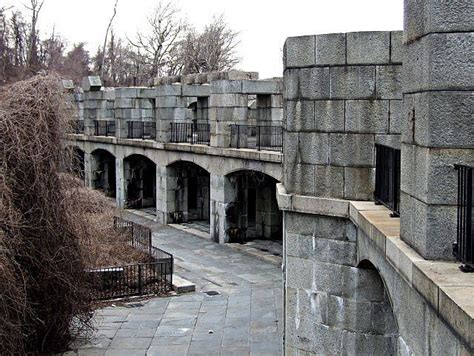 As the number of coronavirus deaths overwhelms New York’s morgues, funeral homes and crematoriums, city officials are scrambling to find locations to temporarily store the dead.


Fort Totten, a former cemetery that’s now a park in Queens, is the likely place where the glut of bodies will be kept during the pandemic.

“If the current outbreak escalates, burials will occur at Fort Totten and Hart Island," said a March 29 email shared among high-ranking city officials. The email lays out the work required to turn Fort Totten into a burial site.

Temporary burials at Hart Island, the city’s public cemetery on the Long Island Sound where unclaimed bodies have been buried for decades, come with a slew of logistical challenges due to regular flooding and the island’s remote location.

With at least 6,182 city residents dead from COVID-19 as of Sunday night, Fort Totten will soon be tapped for temporary burials, according to sources with knowledge of the operation.

Mayor de Blasio has for more than a week declined to discuss the city’s plans for the bodies of coronavirus victims during public briefings. And his office has denied Fort Totten will be used as a site for public burials.

On Sunday, mayoral spokeswoman Avery Cohen declared, “We are not considering temporary burials at this time.” Later, Blasio’s press secretary Freddi Goldstein added: “We’ve increased capacity enough that we do not believe we’ll have to move to temporary burials.”
Posted by JQ LLC at 12:31 PM

Some 400,000+ Chinese workers from northern china (Wuhan area) entered Italy and Spain prior to the outbreak..

The Coronavirus started in Wuhan yet there is no effect of Coronavirus in nearby Beijing or Shanghai but many deaths in Italy, Iran, European countries and USA.

All business areas of China are now safe.

America is not blaming China without a reason.

Even today, India is locked down but all the cities of China are open. China has also announced the opening of Wuhan from April 08. Not a single leader in China has tested positive for the deadly Coronavirus.

The virus has ruined many economies around the world. Many have had to close their borders in an attempt to contain and control the spread of the Coronavirus. Thousands have lost their lives, millions have now got this disease, countless people have been locked in their homes and many countries have placed their citizens on lock down.

The Coronavirus orginated from the city of Wuhan in China and has now reached every corner of the world, but the virus did not reach China's capital Beijing and China's Economic Capital Shanghai, located in close proximity to Wuhan itself.

Beijing is the city where all the leaders of China live, including their military leaders. There is no lock down in Beijing.

Shanghai is the city that runs China's economy. It is the economic capital of China, where all the rich people of China live and run major industries. There is no lock down here, there is no effect of the Coronavirus there.

Another big thing is, that the worldwide share market has fallen by almost half. In India also the Nifty has gone from 12 thousand to 7 thousand, but the share market of China was at 3000 and just merely dropped to 2700.

This leaves one to speculate that the Coronavirus is a bio-chemical weapon of China, which China used to carry out destruction in the world in order to gain economic supremacy.

China has now put this virus under control, maybe they also have the antidote/ vaccine that they are not sharing with the world ever or will do when it is in their best interest to do so.

The “Wuhan Plague” takes the grand tour through Italy etc!
EVERY FLIGHT THAT COMES INTO AMERICA NEEDS MEDICAL SCREENING....otherwise we shall see a return of the grim reaper.
Money for medical not ballistic missiles 👍

I have an American friend who contracts in China. The Communist party is only counting dead in hospitals. In Wuhan city countless bodies come out in bags as well as street littered with pets thrown out of windows suspected of being infected with COVID. Nice....huh?

Queens IS a Potters Field ....full of deadhead community boards and hack politicians!