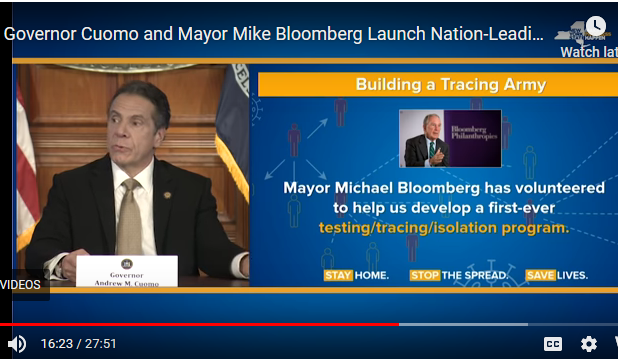 Amid the ongoing COVID-19 pandemic, Governor Andrew M. Cuomo and Mike Bloomberg today announced a new nation-leading COVID-19 contact tracing program to control the infection rate of the disease. Mike Bloomberg and Bloomberg Philanthropies have committed organizational support and technical assistance to help build and execute this new program. The contact tracing program will be done in coordination with the downstate region as well as New Jersey and Connecticut and will serve as an important resource to gather best practices and as a model that can be replicated across the nation. There has never been a contact tracing program implemented at this scale either in New York or anywhere in the United States. The program will launch immediately.

As part of this effort, The Bloomberg School of Public Health at Johns Hopkins University will build an online curriculum and training program for contact tracers. The New York State Department of Health will work with Bloomberg Philanthropies to help identify and recruit contact tracer candidates for the training program, including staff from the State Department of Health, investigators from various state agencies, hundreds of tracers from downstate counties and SUNY and CUNY students in medical fields. Bloomberg Philanthropies will also work with New York State to establish an expert panel to review the work of the program, and create a best in class model that other states can use for contact tracing.

We're all eager to begin loosening restrictions on our daily lives and our economy. But in order to do that as safely as possible, we first have to put in place systems to identify people who may have been exposed to the virus and support them as they isolate," said Michael Bloomberg, founder of Bloomberg Philanthropies and Bloomberg LP, three-term mayor of New York City. "I'm honored to partner with Governor Cuomo and New York State to help do that, by creating a new contact tracing program on a widespread scale. Coupled with far more testing, it will help us drive the virus into a corner -- saving lives and allowing more people to begin getting back to work."

Maybe he can put Bloomberg to work processing unemployment claim.

He should start with his brother Fredo !

Who ever is using the Joe Biden insult generator, keep it up you granny slapping pickle peeler!!!

Surveillance! Sounds like a democrat idea. I'm only glad it's in NY and not here.

Despite being just 2% of the U.S. population...jews comprise 41% of U.S. billionaires, control 70% of U.S. media, 33% of the supreme court and nearly all of hollywood.

Can anyone explain this overrepresentation? Without ad hominem attacks?

Thing is: I'm sick of Bloomberg an his ilk controlling every aspect of my life.

If ever the arbiters of who's behind QUEENS Crap should ever think to reward its critical respondents like YOU with a miniature replica of the Unisphere strapped onto a toilet bowl, then FIRST PRIZE would be in your esteemed honor! MIC DROP TIMES TEN!

I don't trust either of them farther than I could throw them.

At first, Singapore's status as a small island nation seemed to pay off.

It was able to contain the initial wave of cases from China by instituting quarantines and contact tracing to ensure that anyone arriving by air, who might have been exposed, was isolated and monitored.

By testing widely and isolating all those who were potentially contagious, Singapore was able to remain relatively open and continue functioning as usual.

Until April, Singapore appeared to be on top of the outbreak.

Many of the new clusters have been connected to Singapore's vast migrant worker population, in particular those workers -- most from South Asia -- living in cramped dormitories, who appear to have been overlooked in the initial wave of testing. Multiple dormitories have been quarantined and the government is ramping up testing for all workers.

It's unclear whether those infections were from migrant workers coming in from outside, or if the virus was circulating among the largely-untested population for some time. What is evident is that the conditions that workers live in made effective social distancing -- or "home" quarantine -- next to impossible, making it easy for the virus to spread.

"The dormitories were like a time bomb waiting to explode," Tommy Koh, a Singapore lawyer and former diplomat, wrote in a widely-shared Facebook post earlier this month. "The way Singapore treats its foreign workers is not First World but Third World. The government has allowed their employers to transport them in flat bed trucks with no seats. They stay in overcrowded dormitories and are packed likes sardines with 12 persons to a room."

Both Singapore and Hong Kong were only able to maintain relative normality while they kept a tight lid on potential imported infections. Once a wave of cases did arrive from overseas, both had to react quickly to prevent a new epidemic.

That even these cities have both come close to major second outbreaks, requiring them to again pause their economies and institute sweeping restrictions, should be a major lesson to the rest of the world about relaxing too soon.

As many parts of Asia have already experienced, just because a local outbreak appears to be under control, does not mean a new wave of cases can't be sparked by an infected person entering from overseas.

Until a city or country can be sure that no more infections will come in from outside -- or can be effectively tracked and controlled -- the lack of local cases does not mean the danger has passed.

And in larger countries, where borders between regions are more porous and cities lack the ability to easily control and monitor who comes in and out, avoiding imported infections may be next to impossible -- either the whole country is safe, or nowhere truly is.

@More Prevagen Ma!! said...
Post anything at me, Jack. I'll show you where to put it, ya two-timing eggman.
Your cognitive vitimins are not working Soy Boy #ZOOMER.
Don't tell me what to do you pork n' beans-eatin' malarkey magnet !

Fox News Reader said...
Trumps son in-law is in favor of this too.

OMG, please stop with the cutting-and-pasting of entire boring articles.
Nobody wants to hear some "journalist's" perspective on a blog.
The way it's done on a blog is to post the article link then give your OWN assessment.

Cutting and pasting is lazy. It's like if someone asks you to tell them the weather and you post the entire transcript of today's NOAA forecast, down to the barometric readings and pollen count.

To summarize the lengthy cut-and-paste article you posted:
Beware of the second wave of coronavirus! We can't re-open the country until we are certain we can contain the new outbreaks. Forget the entire world economy, our lives are now forfeit in order to serve the coronavirus and the ventilators required to keep those affected alive.

Lastly....CNN....really? They're about as credible as the Chinese Communist Party papers in Beijing.
The only reason CNN has any ratings at all is due to the fact that they PAY all the airports to funnel their garbage news to a captive audience.

Many of the new clusters have been connected to vast migrant worker population, in particular those workers living in cramped dormitories

What is evident is that the conditions that workers live in made effective social distancing -- or "home" quarantine -- next to impossible, making it easy for the virus to spread.

"The dormitories were like a time bomb waiting to explode, its foreign workers is not First World but Third World. They stay in overcrowded dormitories and are packed likes sardines with 12 persons to a room."

&&&&&&
SOUND FAMILIAR QUEENS? The rest of the country will be working and going to the polls in November while we will still be afraid to ride the subway...

"ONLY seven words that end with Fredo!"
Thank You !

Let me know when you start your own blog. Get over yourself.

Look here you ham and egger!! Back at the pool ya know the thing we’d call a piker like you nothing but a mule dog looking for an arm to sniff. So take your prevagen. Dr Jill says so

Despite being just 2% of the U.S. population...jews comprise 41% of U.S. billionaires, control 70% of U.S. media, 33% of the supreme court and nearly all of hollywood.

Can anyone explain this overrepresentation? Without ad hominem attacks?

Thing is: I'm sick of Bloomberg an his ilk controlling every aspect of my life.

Look, you got to hand out admiration where its deserved. Some practices of the ultras make even Jews roll their eyes. But when you have stats like this on a group that encounters discrimination you got to tip you hat to them and give them credit where its due. end of this discussion.

"Workers living in cramped dormitories"
How many complaints did Queens Residents make to the DOB only to be told that a LS4 was left on the door and the case is closed ? Since the early 1990's Queens residents have been trying to stop illegal converions only to be let down by our elected shit for brains public servants.

A billionaire who calls women ‘fat broads’ and ‘horse-faced lesbians.’ And no, I’m not talking about Donald Trump. I’m talking about Mike Bloomberg.” and now Andrew Cuomo's new best friend.

So our "Beloved" Demorat New York State GOV Sonny is Using Coronavirus To Implement a Orwellian Nightmare ! So basically Covid 19 is 9/11 and the Patriot Act on Crack.
Using chaos & crisis to take away your rights and livelihood. Wake up !
I’m not even being sarcastic,.... but hasn’t Alex Jones been saying this for years?

What’s with this jew shit!?! For every Jew taking over the world there is a hundred goyim helping them. Drop it

Did you hear? Chris Cuomo emerged out of his basement and saw his shadow, we still have 6 more weeks of covid-19.

So Fredo's brother Sonny the NYS Demorat mafia don has money for this ?
Democrats are turning us into a 3rd world hellhole very quickly.
Democrat-led states are banking on a federal bailout and will continue to waste our Tax Money.

“The problem with socialism is that you eventually run out of other people's money.” - Margaret Thatcher

1984 Said...
Keep track of us and let out many unsafe Criminals to rape our women !
Good Job New York City Demorat Voters you have shit for brains.

Brooklyn man arrested on attempted rape days after being released from Rikers Island
New York Post 4-26-20
Police responding to a 911 call found Robert Pondexter, 57 — and his crackpipe — at around 5:45 a.m. Saturday on East New York Avenue, between Schenectady and Troy avenues, the sources allege