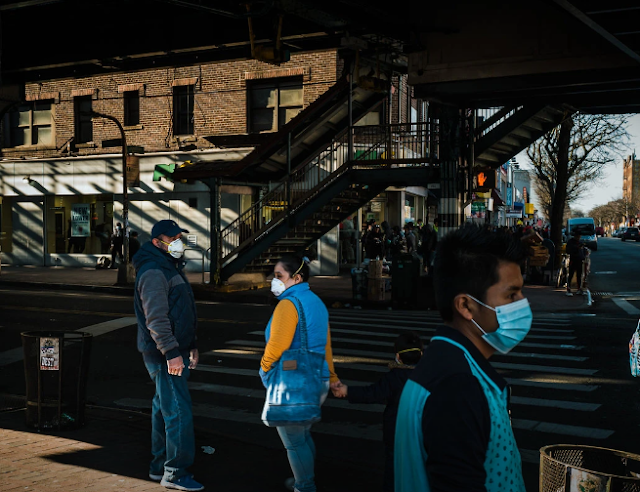 
Anil Subba, a Nepali Uber driver from Jackson Heights, Queens, died just hours after doctors at Elmhurst Hospital thought he might be strong enough to be removed from a ventilator.
In the nearby Corona neighborhood, Edison Forero, 44, a restaurant worker from Colombia, was still burning with fever when his housemate demanded he leave his rented room, he said.

Not far away in Jackson Heights, Raziah Begum, a widow and nanny from Bangladesh, worries she will be ill soon. Two of her three roommates already have the symptoms of Covid-19, the disease caused by the coronavirus. Everyone in the apartment is jobless, and they eat one meal a day, she said.

“We are so hungry, but I am more terrified that I will get sick,” said Ms. Begum, 53, who has diabetes and high blood pressure.

In a city ravaged by the coronavirus, few places have suffered as much as central Queens, where a seven-square-mile patch of densely packed immigrant enclaves recorded more than 7,000 cases in the first weeks of the outbreak.

The chockablock density that defines this part of Queens may have also have been its undoing. Doctors and community leaders say poverty, notoriously overcrowded homes and government inaction left residents especially vulnerable to the virus.

In early March, she said, city health officials sent out fliers with hand-washing tips, but not the outreach workers and multilingual posters that might have conveyed the looming peril.

The sick now include laborers like Ángel, 39, a construction worker from Ecuador who asked that only his first name be used because of his immigration status.

Like many, he said he worked at a Manhattan construction site until he fell ill. He said he was turned away from Elmhurst Hospital because his symptoms were not deemed life-threatening and had been suffering in the apartment in Corona he shares with three other workers. “I don’t have anyone to help me,” he said.

City officials rejected the suggestion that they left the city’s immigrant neighborhoods to fend for themselves. The Department of Health, officials said, created coronavirus fact sheets in 15 languages. Officials mounted multilingual public service campaigns in subways and on television, and have provided continuous updates to the ethnic media including on the need for social distancing.

*Title provided by Crappy
Posted by JQ LLC at 6:57 PM

Government inaction? Like not deporting the illegal aliens back to their country of origin.
They’ll feel so much better back home

Little Joey isn't delivering pizza on a bike or cutting lamb off the gyro spindle.

Sanctuary city New York is sinking fast.
Our government in NY failed us 100% with their virtue signaling. Now they are trying to blame POTUS 45 to gain more votes! A Sanctuary Cities suffer more from COVID-19 Surprise Surprise !
Over crowded living conditions spread the Virus this is common sense right ?
This will not stop and will continue. Look at your Crappy elected Liberal nuts they have blood on their hands ! I'm 100% sure it's a mental disorder.

500,000 undocumented living in Queens. There’s the problem. And they are the ones who helped spread the disease. Period.

Yea, but deporting is no answer as that don't keep the Democratic Party busy building a base and finding work for Party stalwarts.

500,000 undocumented living in Queens. There’s the problem. And they are the ones who helped spread the disease. Period.

WRONG IGNORAMUS, EVERYONE spread the disease. There are states that have a low undocumented immigrants and they have a big spread. I see stupidity spreads more than the virus. PERIOD.


This is factually wrong and ignorant. BTW, this article says immigrant not undocumented.
Blaming people for spreading a disease that no one knew was spreading so widely in January is ridiculous.

NYC is a high population city even if you removed every undocumented person. That is one reason we are hit so hard..there are a lot of people here living close together.

Korea and the USA had their first COVID19 case on the same day. Korea put a plan in place POTUS 45 did not. Korea had 10,000 tests a week in the first week.


We do not have a healthcare system. We have a bunch of separate systems. Each hospital has to compete against other hospitals for the same supplies. Rich hospitals have more resources, poor hospitals get less. Our entire healthcare system is too fractured to work in unison but god forbid we do something about it or it's called socialism...like the stimulus checks getting mailed out.

We should be grateful we have Cuomo now because he has been in regular contact with all the governors and hospitals getting supplies. I don't always like him but in this case he has done well.


The virus also spread rapidly through the Jewish population. Should we blame them as well to be fair with prejudices?


People are dying and its sad some people are blaming one of the hardest hit groups.

This is what happens when you indiscriminately push for an anti-government, anti-tax position. Sometimes the government is needed and this is one of them.

Why is there no direct communication between the CDC, hospitals and laboratories so that lab results aren't updated manually? Why can't doctors be credentialed nationally so they can cross state lines and practice at other hospitals without be credentialed? Why do we have a system that allows wealthy hospitals to outbid poor hospitals for supplies?

"We should be grateful we have Cuomo now " Check your meds !

@ Jon said... Government caused this Virus. YES The Communist Goverment in China !
It spread fast in the U.S. cities beacause of overcrowded living conditions. You are asking for more Government and Taxes ?
Try reading Self-Reliance by Ralph Waldo Emerson
STOP LOOKING FOR HANDOUTS FROM THE NANNY STATE !

You are completely wrong on several points:

-"a government that couldn’t produce a rudimentary test for coronavirus"
While there was a problem with the initial testing "control" agent with the first kit issued by the CDC, the subsequent test developed by CDC scientists in conjunction with the private sector are the most accurate and sensitive on the market.
More people have been tested in the US now than any other nation.
By the way, early testing would not have changed much of the trajectory of the virus. First, because it was already all over the place by the time the idea of testing was considered. Second, because the Liberal/Democrat press would have been screaming "Trump takeover ploy during impeachment" if he even hinted at shutting down the nation for testing in January...when you people were attempting to throw him out of office.

-"that couldn’t contain the pandemic as other countries have done..."
No nation has "contained" the panic, they've managed it as best they could. Some nations are more pliable because they are united. Here in the US, did you really expect Democrats like you to go along with everything the Trump administration could do to keep you in your house? Or perhaps you are an admirer of Chinese communists...you know, the same government that puts its Muslim citizens into concentration camps along their Western border or squashes free thinkers in Hong Kong. Maybe you believe that China isn't lying about its numbers...that would be pitiful.
As it stands, the US is the third largest population on the planet, and the number of fatalities stands at 18,761...less than the Seasonal Flu.

-"that couldn’t produce enough ventilators for the sick or even enough face masks and gowns for health-care workers."
That's funny, last I heard, NYC didn't actually need 40,000 ventilators, remember how Cuomo had 2000 piled up in a warehouse in NJ?
Many states are even returning extra ventilators back to the National Stockpile.
What's more, Ford and GM are building ventilators by the thousands, enough to send to the UK, Italy and Spain who need them. As far as PPE's, Cuomo said we had more than enough PPE's here in NY to accommodate all hospitals. Stop spreading lies.

-"This is what happens when you indiscriminately push for an anti-government, anti-tax position. Sometimes the government is needed and this is one of them"
No. What happened here in NYC is that the virus exposed the inherent third world living conditions that years of Democrat governance have fostered. Rampant illegal immigration, housing conditions akin to Mumbai or Jakarta, depleted stockpiles from years of corruption and mismanagement. Then you blame the freedoms we inherently have as free thinking Americans. LOL.

There are definitely things we learned from this crisis. One of those things is that you can't allow Democrat/Liberal hysteria to destroy all reason.
Again, look at the numbers of fatalities and understand that the sky never fell as you and the Democrat media predicted. In fact, the nation continued with the Federal government acting as the "backstop" it was meant to be.
We all know you wanted Bernie and his Socialist revolution to happen, and what better opportunity than a time of national hysteria, but it didn't work, because the hysteria itself was unfounded.
Shame on you for thinking a socialist idiot from Brooklyn would have the real answers to moving this nation forward...by copying failed communist policies from the last century.

I work at a hospital and in this particular situation, Cuomo has been great.


---
Anonymous Anonymous said...
"We should be grateful we have Cuomo now " Check your meds !

Cuomo is an abomination. He didn't prepare when the CDC recommended NY stockpile ventilators in 2015. He shut hospitals in indigent neighborhoods and has drastically cut the Medicaid budget. Just read an article about street vendors selling N95 masks. If they can find them why not Mr. Cuomo? Cuomo has shut all the gun shops and ranges, deeming them non essential so that law abiding people can't protect themselves or their property.

When I think of Cuomo two words come to mind: Moreland Commission.

I have told people for many years that NYC should NOT be holding so many people and is a HUGE safety hazard. Now look what happens. I even had an argument with parents at my daughters school telling them that NYC is a safety hazard especially the schools and they tried arguing with me "well kids have to go to school". But if you dont fit into a city or neighborhood, there are plenty other cities in New York that you can live in and there are more states to live in than to crowd here in NYC. I'm so glad that I moved all the way out to suffolk county right after that school year. My parents unfortunately have to deal with the crap that lives there. NYC is on a path to destruction. This is what happens when you allow 9 million people to live on top of each other. And after this, nothing in NYC will ever change. The government will keep allowing zoning laws to be broken and keep allowing illegal conversions and keep building without any further infrastructure being put up. They will never change there. Sorry my fellow native born new Yorkers, you are all screwed.

Sanctuary Liberal cities spent their money on illegals instead of buying medical equipment recommended by their own health departments. Now they want all of us, the taxpayers, to pay for THEIR shortfalls.