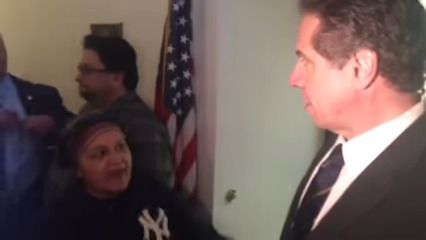 Gov. Andrew Cuomo admitted Monday that the Empire State could run out of state funds to pay unemployment benefits to New Yorkers should the coronavirus pandemic continue to ravage the economy.

“No, that’s why federal government has to provide funding, we don’t have money,” he told reporters during his daily briefing in Albany.


“It depends on how many people moving forward asks for unemployment benefit and how long it goes on, but it’s in the billions of dollars.”


Meanwhile state budget officials reported in a new analysis that the recession caused by COVID-19 could be worse than the Sept. 11 attacks and the Great Recession of 2008.


The state economy stands to lose $243 billion directly tied to losses from the pandemic, according to the State Division of Budget.

Didn't this guy just have a meeting with the President? Somebody needs to get in Mario and Matilda's son's face, call him on his bullshit and tell him to find that money. Kind of like this:

That is horrible how he treated that women ! He could have reached out to her...

QC Reader said...
A Bigger Punk Ass than Fredo who attack a 65 year old Fat Tire Bike rider in the Hamptons.
I hope that women gets on a TV show and explains her story to the world just like Tara Reade did in 1993. Look at the Face he "Govenor Sonny" made when she spoke to him ! He could give a fat rats ass about her or you the Stupid New York Voters who keep him in office.

@JQ Now these post are showing some things the Voters need to know !

He could have treated that women better but let the police man handle her.
It's fun watching the left falling over themselves to abandon #BeleiveAllWomen at the drop of a hat. They'll be fucking toothless the next time they try to #MeeToo somebody politically

So end the lockdown and reopen NY the virus has already infected everybody in NYC already whether they know it or not.

This fool has contributed to the downward spiral of our state! It teeters on the brink of bankruptcy! He'll blame all the fiscal irresponsibility on the virus, just wait and see!!! It was a shit show before Covid-19.

It's all gone towards the illegal immigrants, oh, sorry the migrants, that we've rolled out the red carpet for. Of course there's no money.

A $6 billion budget hole existed long before that bat was undercooked in that Wuhan KFC. Now he wants to blame everyone else for his wasteful spending. Cut the freaking over bloated budget, and while doing that, also cut the tolls, gov!

Plenty of Money for "Free" Late Term Abortions on demand !

Besides California, New York State brings in more federal tax money than any other state. He is saying we need federal help but states like West Virginia get federal help all the time. That is why we pay federal taxes.

Hahahhaa,
I just realized why that top photo of the woman giving Cuomo the "stink-eye" is so funny and familiar.
It's a modern day version of the classic Weegee photographs of NYC in the 1940's.
In particular the well-known photo he took of the inebriated lady leering at the two "grand dames" walking into a posh ball in Manhattan back in the day.

This modern day version has Prince Cuomo (by marriage to the Kennedy name)confronted by an angry New Yorker ranting about the inept NY bureaucracy as he tries helplessly to ignore her.
LOL, thanks for the laugh.

❝We have a structure that predetermines winners and losers. We are not getting the benefits of all the people who could contribute to the growth of the economy, to advances in medicine or science which could improve the quality of life for everyone——including some of the rich people,❞ he writes. Jon Lancelot: ❝He forgot Congress has the power to get us out of this slump, and this downgraded economy is manufactured. Congress cannot go broke.❞

❝The people don’t have a voice because they don’t have information.❞ ——Gore Vidal

❝All tyrannies rule through fraud and force, but once the fraud is exposed, they must rely exclusively on force.❞ ——George Orwell

❝I have never wished to cater to the crowd; for what I know they do not approve, and what they approve I do not know.❞ ——Epicurus

❝The more I see of the moneyed classes, the more I understand the guillotine.❞ ——George Bernard Shaw

QC Reader said...
@Anonymous said... "The public be damned" I love that it should be put on T-Shirts !
Hey JQ what about a TeeSpring.com account for Queens Crap. Raise some money for you and the site. I would buy a few to show some support ! Crapper T-Shirts and Coffe Mugs ect...

I/We want UBI so we can pay the rent until we get our jobs back and/or look for jobs in case they are not there. But I guess you prefer bailing out Airbnb, nonessential airlines and Ruth's steak houses with that income huh.

You seem to forget that these trillion dollar bailouts is a class action settlement to repay us for government incompetence and complacency.

Don't tread on me Turkey.

Universal Basic Income is a very bad idea. UBI makes for a good slogan but it is a poorly designed welfare policy. Reality is that most of the people that needed support weren't capable of making good decisions with their money so giving them cash instead of services & subsidies is wasteful.

Sure it's good for sloganeering, but your take on the reality of the people you generalize is just a Friedman/neolib talking point.

I got three words for your take: Stock Buy-backs

No one is asking for lifetime UBI. I'm sure not.

$1,200 is insufficient, especially how late it came and how our governor's dept of labor is making it very hard for millions to get UI/restitution for his fucking up as well.

"Restitution for his fucking up as well." Get Back on the #TDS Meds Dear !

The biggest telltale sign of #TDS is cognitive dissonance. Go get some sun and bleach.

Tired ass #TDS said...
Want to make a liberal lose it? Ask them if Ms. Reade is more credible than Ms. Blasey-Ford. When they say “no,” ask them why. Then sit back and watch them spin their wheels trying to explain away their lunacy.

Facts Are the Antidote to Trump Derangement Syndrome !

@JQ LLC "Go get some sun and bleach."
President Trump never said "bleach" or "Lysol" but spoke of UV light & similar disinfectant processes. Don't be so disingenuous!!!
Demorats were too busy with the impeachment sham to prepare for an outbreak !
Trump may be the only reason we still have a chance !

You know if he would prepare for his pressers and learn to express his thoughts better maybe no one would relentlessly goof on him.