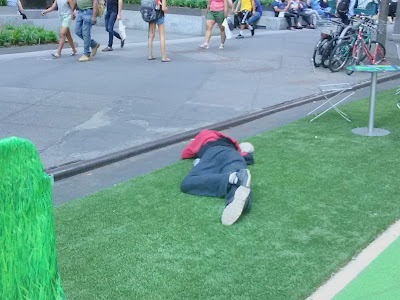 Throughout the past month, Mayor Bill de Blasio has consistently expressed skepticism over calls to open up city streets to give pedestrians and cyclists room to maintain proper social distancing while getting fresh air during the pandemic -- an initial pilot program with a handful of open streets was canceled after less than two weeks because of concerns about NYPD resources being diverted to policing the new open spaces.

But after the City Council introduced a bill last week that would open up to 75 miles of streets for recreation, de Blasio has changed his tune: he announced on Monday that the city would open at least 40 miles of streets as we enter the summer, with the goal of opening 100 miles total.

“The City Council came forward with a vision for how we could open up more streets, do it over time, and do it in a way that’s responsive to the core concerns we've heard of the NYPD over safety and enforcement,” the mayor said during Monday's press conference. “Over the next month, we will create a minimum of 40 miles of open streets...and as the crisis continues, the goal is to get up to 100 miles."

De Blasio's announcement was short on details, but the mayor did explain where they would strategically begin opening streets: "The way we will do it is we're going to focus first on streets in and around our parks. Very concerned about the streets on the outside of parks that oftentimes we're seeing that immediate area getting crowded. That's an obvious opportunity to open up more space."

He added that they will look to expand some sidewalks, open streets in local areas which aren't necessarily near a major park, and expand bike lanes. “So the focus here will be to focus of course, same as we're doing so many things, on where the need is greatest," he said. "The first priority is the places hardest hit and then where it will have the most impact.”

If the streets should be open to the public as this minority of bike zealots and vehicle bashing upper class twits have been more concerned with since the city shut down, then I hope they don't mind homeless families setting up encampments in those former parking spaces.

ah yes, those whiny, privileged people who don't own cars

I can't park my car in front of my house in the public space and have to rent a garage in my neighborhood of Ridgewood where on my block there are at least 2 businesses being run on my block. One sells cars and another is a mechanic. I have to walk in the street to keep social distance with all the super aggressive car drivers. So by your definition wanting the public space that my tax dollars pay for be available to use to all of us makes me the entitled one. FU!!!!!!!!!!!!!!!!!!

That's not what I said at all.

And violators like used car lots and and auto shops that used the sidewalks as extended storage is another issue entirely which has been covered here endlessly and will again. This is about ordinary and legal parking spaces used by tax paying vehicle commuting citizens, this open streets program is a joke.

I can only say, that I hope NYC recovers quickly. I lived there for 40 years and it's still my hometown. But, I'm a bit skeptical when I the words "vision" and "NYC Council" used in the same sentence. In any case, "All my best NYC, and good luck!"

Why are people allowed to store their cars on public streets for free? Privileged car owners again. Free parking, free to pollute and free to kill without penalty. Time for NYC car owners to start paying up $$$$ for their privilege.

The car hating cabal at the DoT will use any excuse to make driving as expansive and difficult as possible, even a pandemic! They are clueless and indifferent to the fact that so many outerborough residents do not have easy access to public transportation, or work in other outerborough parts of the city that commuting by subway through Manhattan would take forever to get to work every day. Yet the most bewildering thing is that our leaders don't realize that so many are leaving NYC because their lives here have been made so difficult and onerous. I'm getting out of New York the day after I retire. Living here is simply not worth the cost and hassle.

"Time for NYC car owners to start paying up $$$$ for their privilege."
They already pay too much Jackass !

"Why are people allowed to store their cars on public streets for free?"

Actually its not free. You have to have a valid registration to do so legally, which you of course have to pay for. Not to mention the tax on gas, tolls, and that many spots are not free but are metered.

The real question is why bicycles are allowed to park on the public sidewalks for free. They pay none of the fees or taxes automobiles pay, but get the privlage of using the road network and free parking at basically any sign pole or rack.

Why are people allowed to ride bikes on public street with impunity. Privileged hipsters again. No laws enforced, no rules of the road followed and can create chaos without penalty. Time for bicyclists start paying $$$ for their arrogant privilege.

@JQ LLC "Open streets program is a joke" ?
This is all by design and It's working fine. The Green Wave Bicycle Plan is great.
Why are you against more "Green" space ? Not to opened minded to others wants and needs ?
Walking and Biking is better for the enviorment and your health.
Cars can be parked in new garages and the street opens up more sidewalk space and bike lanes.
We need to break the car culture that’s choking our streets and literally killing people.

Bike Rider says...
This is a critical infrastructure change that car zealots don't like but will get use to.

Looks like the bike zealots and pseudo-urbanist agents of the city have made it to Queens Crap. Welcome idiots

Anyway, let's start off with that "car culture" idiom that the bike lobby and their minions keep refraining to control the narrative and mold the thoughts of some of the most spineless and feckless city council members. Driving is a form and choice of transport, not a movement or particularly a lifestyle (except for that fast and furious shit), I can easily bring up "bike culture" and rail against that (which I already do)and point out the constant scofflaw behavior of a majority of cyclists.

As you can see from some of these comments, especially the last one, the bike zealots have no grasp of logic and have vehement intolerance towards vehicle owners as they generalize all drivers as stone killers because they drive cars as if it's guilt by association.

Never mind that ever since more bike lanes and pedestrian plazas have taken over th streets, biker and pedestrian fatalities have went up. Biker accidents have also went up too. Sure there are reckless drivers out there, especially with the streets vacant, but there is hardly any account of the biker's bad decision or when a pedestrian jaywalks.


And where are these new garages Bikes Good is talking about?

Oh, and one final thing. There's a rumor going round that Transportation Alternatives members drive cars.

You saw those reopen America protests and McDonalds protesters demanding PPE's by using their cars to block drive-thru's? What makes you think it can't happen here?

The area around parks should be less crowded, not more, since there's a park right there to go space out in!

I'm ok with temporarily closing streets during the pandemic, but this also includes extending sidewalks and lots more unwanted bikelanes, and those aren't going to go away when the pandemic finally ends.

The only reason they push bike is that the fewer cars, the less carbon footprint, the more buildings go up. Those bike nitwits think they are important because the big guys listen to them.

The fact is the big guys get campaign donations from developers.

The bike nuts are dupes for a bigger scheme. The big guys couldn't give 2 sh*ts for the bike nuts.

"Bike nuts" How many Bike "Nuts" do you meet on a daily basis ? I see more road rage Car "Nuts" every time I leave my home. Driving, Walking, Bike riding is so much more dangerous than ever before. Look up the stats ! Most of them are young Males, Young Women texting and Soccer Mom "Karens" with big gas guzzling SUV's ! Bikes are not a problem only your miss directed anger because you do not want to share the road !