The great walls of history 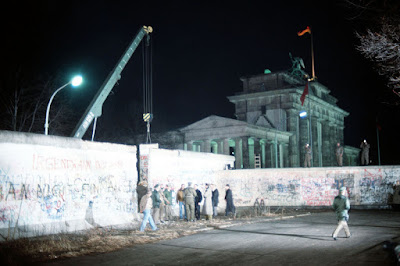 The Wall of Astoria

Courtesy of George the Atheist
Posted by Queens Crapper at 7:13 AM

Will there be armed guards atop this wall???

George, a better term for the first wall is "Western Wall."

Despite all that can be spun, our leadership has caused Queens to be defined in the outside world by one term:

(of a place) extremely dirty and unpleasant, especially as a result of poverty or neglect.
"the squalid, overcrowded prison"

And it will stay so until we wake up and finally do something. I am not placing any bets.

Now where was that Peruvian restaurant that got rave reviews by 4 papers and 800 likes the day they opened their doors?

Yup Queens is a place that knows how to set it priorities. Our nation's future is secure in the hands of that crowd.

The wall kinda makes sense perhaps developer's were looking ahead.
With all this 3rd word shit & islamic terrorists waltzing into our city under both Obama and the sick mayors guided hands a wall is the only way you will be able to have nice things and stay safe. --Optional, machine guns moat with alligators included.
Things are getting that bad !!

Water Over the Dam said...

In George's "The Wall of Astoria" photo: imagine standing in front of that vantage point, looking up to the magnificent hill that was once there and since carted away, and seeing it covered with greenery and park benches, a children's playground, a dog-run. Maybe even a concert shell. But dream on no longer: that phantasy image of serenity was passed by because area councilmen Constantinides and Vallone did not have the foresight to make it materialize.

THE SHAME OF ASTORIA.

That this is happening within spitting distance from the factory tells us this is the future of the Steinway brand.

The wall kinda makes sense perhaps developer's were looking ahead.
With all this 3rd word shit & islamic terrorists waltzing into our city under both Obama and the sick mayors guided hands a wall is the only way you will be able to have nice things and stay safe. --Optional, machine guns moat with alligators included.
--

There it is, Queens has spoken. Nothing to see here, folks, move on!

When those no-talent Caliendo-designed utilitarian warehouses are completed you might not even see the wall or even the mansion.

Hate to say this but base don talk at last winters NAMM show in Anaheim Steinway and basically ALL the acoustic piano brands will be in big trouble soon. Even Yamaha cut it production 2/3 due to lack of sales
1- The "new generation of children" are to feral, dumbed down and impatient to learn how to play them. Teenagers seem to have lower attention spans seem to demand instant gratification and to top it off most ALL the schools are scuttling music, science and history.
2-The Asians, rich people that DO appreciate wonderfully crafted pianos like Steinway have this noew huge pool of vintage & quality used instruments that retain more value that can NOW be had for a song.
Dozens of Baldwins, Stienway, Kawai, Yamaha Spinets, Grands and Baby Grands have been turning up Craigslist Long Island, many for free good working if you take away.

because area councilmen Constantinides and Vallone did not have the foresight to make it materialize.

ummm. no, that is not the REAL reason they did this to the community (and you have to add the rest of the Astoria pols up to Crowley on this one)

their foresight had .. um... competition for their attention and they probably felt comfortable with a calculated guess that the community would run and hide. and they were right!

a lawyer friend once said the world has two kinds of people, wolves and sheep. one of the best insights anywhere when the Queens electorate is involved. you can literately crap all over them big time like these guys and they should sit there and whimper.

It's a pretty tough tradition to break: Steinway D's are the defacto piano for concertizing and recording, no matter what anyone tells you. Few concert artists have the clout or the time to hold out for anything else. (not that many do.)

And for the record, Steinway did not participate in the last NAMM show.

"defacto for concerts and recording"

Nope: Acoustic pianos are expensive to transport on tour requiring road cases the size of trucks and somebody to "tune them" after every move. Most recording studios are smaller due to rents (dont have the room for them) and most artists and producers use MIDI and Protools. If really needed most classical productions (The Beacon or Carnegie for example) will rent them from S.I.R
Even Elton John is now using a 88 key Yamaha digital piano module with MIDI that slips into a large modular lightweight carbon fiber shell that's wrapped with LED displays. It can change its color, show photos and do its own light shows.
Compact digital pianos on stands and cut down B3s (Felix Cavelier) are now used in over 95% of shows.

I dunno....it sorta makes the mansion look more dramatic....set up high upon an impregnable pinnacle....dontcha think.
LOL!
Of course, the wall of isolation that Queens' politicians have set up to separate them from their constituents has not been pictured.
Trying to get through to burro president Katz on the importance of historic preservation is like butting your head against a brick wall...just like her predecessors.

Jerry, as the anonymous commentator above stated: enjoy this dramatic view now because months from now it will be blocked by warehouses.

There is a great deal of difference between Jerry Lee Lewis banging out 'Great Balls of Fire' in Vegas or JoAnne Castle doing her honky-tonk on Laurence Welk and what we are talking about - although both styles would never sound better than on a Steinway.

Yes 98% of recording and concert artists have that as the instrument of choice for a reason.

We are talking about the high end of the industry, and every concert hall has instruments stored on premises and the technicians that tune the instruments precisely as the artists would like it - and believe me, if you come in with several tractor trailers of sets - a piano is the least of your worries. Every artist of the first rank is very particular on how their pianos are tuned as well as voiced. No piano shaped objects for them!

And Joe, a piano has to be tuned after every concert.

Anon 2: Wailing Wall and the Western Wall is the same thing. One name is just as appropriate as the other.

someone has to stand on the wall

Quote: "Obama and the sick mayors guided hands a wall is the only way you will be able to have nice things and stay safe. --Optional, machine guns moat with alligators included."

We already have a moat with alligators. It's called the Rio Grande River and its 500 miles long. Hows that working for ya?

Concert Hall?
Oh yeah name me one "HALL" 800+ seater aside Lincoln Center with a house tuning tech !! Some high end "chamber" on or restaurant is not a hall and doesn't count
Thanks to all the racketeer IATSE unions driving operating costs sky high and locking people out. Do you know what it takes (and costs) to change a simple screw in light bulb in Carnege hall? No more dedicated concert halls (not anymore in New York these days) its all been cut to the bone you have to haul your own grand piano and tech or rent. Jerry lee Lewis or PINK included. In which case big acts usually have all that on the technical rider.

Read this my friend, about the STEINWAY PIANO TUNER WHO WORKS CARNEGIE HALL
and races around the city tuning up to 14 pianos a day:
http://www.wnyc.org/story/137371-blog-new-york-works-carneige-hall-gets-tune/

I don't have time to go through your list but there is more to music than Twisted Sister and the Bestie Boys.

No doubt, it is temporary drama. Warehouses....the final insult to a glorious heritage.
Let's name each of those warehouses for the lousy politicians who allowed this to happen.

LOL, The Isaac Stern Auditorium (Joes exception) IS Carnegie hall and that "tuner" is for hire and not "in house"

"Let's name each of those warehouses for the lousy politicians who allowed this to happen."

Jerry, you're on to something. The wheels in my head are turning. Thanks.

"The Wall of Astoria" aka "The Curtain of Constantinides".

What's wrong with the beastie boys?
You don't like jewish rappers?
r u a racist?
lol
i crack myself up

They don't like Twisted Sister also --BTW One of the crappers here was in that band. (1 Italian, 2 half Jew's and Puerto Rick--R.I.P AJ

Rumor has it that a certain tight knit religious group is interested in the entire complex as a dormitory teaching center.

Now what would Astoria have to say about that?

And rumor also has it that Karl McNamara will be the Chief Guru of the sect.