No, they don't deserve a raise 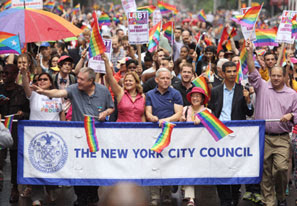 ...what do city council members do to justify the six-figure salaries they already enjoy? Their jobs, after all, are meant to be part-time. By law, the city council must meet twice each month, except during July and August. At these 20 “stated meetings,” votes are held and bills are introduced. After winning the speakership, Mark-Viverito promised to run the meetings efficiently, and indeed she starts them on time and typically adjourns them within 90 minutes or so. Almost every council member—except for the handful of Republicans and the speaker’s political enemies—gets assigned chairmanship of a committee, which usually meets once a month.

Council members serve on a number of these committees and are expected to attend committee hearings. They routinely show up just long enough to be marked “present” or to ask a question that could get them on the evening news. Each council member has a district office and a staff to deal with constituent services, media inquiries, and legislative matters. Council members keep themselves busy by attending events at senior centers or schools, meeting with local businesspeople, breakfasting with civic groups, and talking to other elected officials. To outsiders—whether employed in the public or private sector—it seems that council members make good money for doing what amounts to schmoozing for a living.

And the schmoozing comes with perks. Committee chairs are granted an additional “lulu” (payment in lieu of expenses) of $8,000 to compensate for time spent overseeing one committee hearing per month. The council’s majority leader, a position with no specific duties, gets a $15,000 lulu. The speaker gets an extra $25,000.

Advocates for the pay raise, in what they tout as a reformist measure, pledge to forego outside income and give up their lulus for the higher salaries. Earning outside income through a professional practice or a business, they suggest, is an inherently corrupting influence on the honorable execution of the “people’s business.” But the offer to go “full-time” in exchange for more money is just a bluff. Virtually no council members are capable of earning outside income, because few of them have any nongovernmental work experience. One-third of the 51 council members have zero significant prior work experience, except as aides to elected officials—frequently the council member whose seat they now occupy. Another six council members are former public school teachers. Several, including speaker Mark-Viverito, were union staffers or community organizers. Aside from a handful of lawyers who could possibly maintain private practices and an evangelical minister who continues to preach every Sunday, it’s hard to imagine that many members of the New York city council have much earning potential in the real world.
Posted by Queens Crapper at 12:26 AM

And, this is what the face of government tyranny and Neo-Fascism looks like, and now sounds like as well: Don't be a feckless, intensely incompetent, cradle-to-grave politician like every one of us (as opposed to a "finite" public servant) like me---just do as we order you to serve a terminal lifetime of starvation wages, beggary and obscurity.

It's time to wake up from a 50-year sleepwalk, fellow citizens, and abolish the entire City Council (as well as the Council Speaker)! Because getting elected to public office is not an activity of accomplishment that speaks of honest, ethical leadership (that leads by example). Likewise, neither is practicing 'selective' and 'occasional' representation that is tantamount to a dereliction of public duty.

In the end, I would sooner trust the REAL work of such a vacuous, poorly defined city council part-time job and title to all illegal immigrants---at least they know how to EARN AND DESERVE their pay (whether it be fair or not---usually NOT), by hard work and showing up every day---so unlike what passes for any pretense of leadership today, throughout a city council that should be ordered to immediately slash their vastly overpaid salaries in HALF (and, ironically, they would STILL be far ahead of the rank-and-file)!

And, frankly, what hubris they display in asking for more (while accomplishing far, far less), when if they had any real talent in the first place, then they would be working in the REAL world to see what it feels like in REAL TIME to earn almost $200,000 a year outside of their customary, cushy, daily government luncheon and a manicure (which for them is a stressful day)!

Didn't these empowered idiots ever hear about doing MORE with LESS, just like EVERYBODY ELSE, who are actually paid FAR LESS for MORE? And, no government body should ever be in charge of appointed salary bumps for themselves---ever! That's why there is a little, purported democratic action called 'PUBLIC REFERENDUM'---you know, the same public, policy enforcement that former Mayor Michael Bloomberg chose to willfully ignore (and abrogate), when Empress Christine Quinn indulged his obvious bribe to stay for an additional, unlawful third term, until 2013, that would lavish her with a passing of the public scepter to her squat, dense life form of public privilege and undeserved, unearned splendor---versus public squalor, beggary and obscurity for everyone else!

As I said previously, welcome to New York (and the United States): The Official New Fourth World of government foisted Neo-Fascism!

They don't deserve what they get now, much less any more. Their pay should be cut in half.

Swift kick in the pants is what they deserve.
One term and you are out.
No family members allowed after the one term.
Minimum wage salary, same medical/social benefits as the people they represent.
Create objectives and tie minimum wage salary to accomplishments.
No side jobs, side deals.

The council member with any decent outside income to go along with his full-time legal practice, is the millionaire lobbyist, Paulie Gumba Vallone. He only took this supposed job because he needed to prove to the family that he was just add good as his brother and to make some more money helping out the rebny, some of which are also clients of the vallone lobbyists, either now or in the past.

Van Bramer worked in the real world. He worked the check-out book machine at the library.

Get rid of City Council!

Mark-Viverito should be made to register as a full time lobbyist for Puerto Rico. Every other word out of her hideously ugly mouth is promoting why we should give OUR money to Puerto Rico for one reason or another, with nothing in it for us. She deserves a raise like DiDumDum deserves a second term. (barf alert)

Shakespeare - "The first thing we do, let's kill all the lawyers,'' King Henry VI, Part II

So what they're saying is they want a higher salary because they don't want to take as much illegal payoffs anymore due to the numerous politicians getting arrested the past year or two.

Do they get the raise before or after they put tolls on the east river bridges?

If got the tar, who is bringing the feathers?

Vote all of them out of office if the raise gets approved !

Correction, (sarc): When Shakespeare wrote 'Let's kill all the lawyers,' it was the corrupt, unethical lawyers he was referring to. Shakespeare's exact line ''The first thing we do, let's kill all the lawyers,'' was stated by Dick the Butcher in ''Henry VI,'' Part II, act IV, Scene II, Line 73. Dick the Butcher was a follower of the rebel Jack Cade, who thought that if he disturbed law and order, he could become king. Shakespeare meant it as a compliment to attorneys and judges who instill justice in society.

And, that certainly DOES apply to whatever passes for competent law within the entire City Council (including the Council Speaker herself), as well as the very worst administration in the history of City Hall fail (and THAT includes Boss Tweed!), despite that there are very few ACTUAL lawyers who are employed as city council members (and the ones who are, like the Vallone Brothers' political dynasty are an unfunny carnival act at best)!

But, as I stated previously, city government has indulged these 'patronage' positions for more than five decades, regarding all city council representatives, the Council Speaker, the Public Advocate and all Borough President positions (which are collectively jobs of great visibility---but next to zero importance for all languishing, frustrated constituents (whom they repeatedly fail, disregard and ignore, with a vengeful impunity), as they continue to practice 'selective' and 'occasional' representation, as well as a total dereliction of public duty, which betrays the the collective oaths of office that they swore to uphold.

In part, this is why our intensely inept and incompetent city government always cries poverty when there should be plenty of resources to add what has always mattered for more essential services (but our taxpayer funded dollars are continually denied!), in a city that never stops building (over building!), and growing (over crowding!), where our subway system itself is an embarrassment to all ACTUAL primates---and, sadly, so are the corrupt, dishonest, bought and paid for politicians, who are in total charge of the systemic greed and graft that we all pay a price for in the many forms of daily injustice and human misery that didn't previously exist!

The city council's ludicrous request and rationale for it reminds me of the kids who peddle candy bars and fruit snacks, and solicit donations for an alleged sports team on the trains because at least they won't have to resort to crime.

At least the kids do it with genuine dignity.

Attention (sarc): Alas, Shakespeare was never faced with this kind of systemic and grinding corruption, from New York State government alone, no less!

In fact, were Shakespeare still alive today, he would have rewritten that scene to read: "Doth protest to LITTLE, methinks---hence, the explanation why we so wrongfully allowed, condoned and tolerated a slow but steady Neo-Fascism, and Neo-Bolshevism to take over all of our purported, Constitutionally guaranteed freedoms, rights, liberties---and democracy itself, in the first place (that have been abrogated with a vengeful contempt and impunity)!

Protest too much, you say? Says you---not I!

There they are the two Johnny one notes...Van Bramer and Dromm....forever foisting gay rights as their main agendas. Uh...not all New Yorkers are gay...you guys. How about other rights....like the rights of neighborhood preservation....our right to a good quality of life without living like sardines in an overcrowded can?
Uh....we know....both you guys are supported by the over developers.
Well....kiss my grits....you pair of phonies!

It always puzzled me how Shakespeare got away with so many of his works making much fun of, and critical of the Monarchy, yet there was never any vengeance from the Crown, that we are aware of...

I would think Koo makes more than Vallone.

"Gumba:" How rude and childish of you. Misspelled too.