Malcolm's in the clink 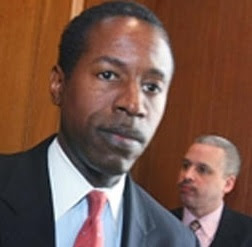 Disgraced Queens politician Malcolm Smith surrendered to prison Friday in rural Pennsylvania after a failed bid to stay out of jail pending appeal of his corruption conviction.

Smith, once a top leader in the state Senate and lifelong Democrat, was convicted of bribing political leaders to back a quixotic mayoral bid as a Republican.

Late Thursday Manhattan U.S. District Court Judge Kenneth Karas rejected Smith’s request to hold off on surrendering to federal prison while his appeal is under review.

Smith had been given a surrender date of 2 p.m. Friday, and he self-surrendered early Friday to the U.S. Penitentiary in Lewisburg, Pa., where he’ll be known as inmate 68381-054.

The penitentiary is a high-security prison with an adjacent minimum security prison camp. It was not clear where Smith would be assigned, but white collar criminals like Smith are usually assigned to the lower-security facilities in the U.S. Bureau of Prisons.
Posted by Queens Crapper at 12:35 AM

Halloran, Smith & Tabone. What is happening with the Tabone matter? Two down and one to gol.

Can someone make a list of every Queens pol that has been put away or is under investigation. Make a nice chart that we can attach any press release from the same.

This can only be summarized with extreme schaedenfreude by J. Moretti.

Anyone, including those with lobotomies could have pulled a coup like this.

You do the fucking crime, then man up and do the fucking sentence. After attempts to postpone his 7 year prison sentence crooked ex Senator Malcolm Smith is finally going to see his new home for the next 7 years for his typical Southeast Queens corruption bullshit.

Now let’s round up some of the others still on the loose and there are many.

I do love a fall from grace story, though this low-life had not far to fall from to begin with, he was always shady. Read his partnership with Rev. Floyd Flake and their shady real estate deals.

Probably a better cable TV plan than he has at home.

Continue to study law on OUR DIME!

So he will be much more qualified to run for office when it is all forgotten and he is back out...

Sorry could not pulled off a coup. stupid texting

Alas, for many years, I have expounded on how Queens County has become so entrenched in systemic corruption, graft and political greed, that it is now beyond any pretense of honest, ethical leadership (that leads by example), and sadly, Smith is far from alone (as evidence by the many indictments and lock ups of too many before him, that are too lengthy to name in this missive).

Thankfully, with the advent of the digital age (and online 'shaming,'which now seems to be the only punishment that continues to be effectively working), and the long overdue return to activism, protest, rally and resistance that is once again upon our residents to expect, insist and demand that all flagrant abuses of publicly elected power be seriously addressed and punished (with jail sentences that are finally commensurate with the many heinous crimes committed), it appears that karma has finally caught up with these voracious thieves of epic, humanitarian fail.

And, like karma itself, the future also has a peculiar way of arriving unannounced---where, the new cases and prosecutions have only just begun!

Did you ever notice those who karma caught up with claim to be victims...

I hope he drops his soap in the shower every day

Did you ever notice that those who think that they are clever in their snarky, unprovoked remarks (and devoid of the actual facts of a case, no less), are the same public fools who aren't even smart to begin with, even in the narrowest of senses?

Worse, they insist on maligning the real identities of others while they cower in protected obscurity---like the true and pathetic cowards whom they've always shown themselves to be!

My apologies to (sarc), if the last comment made was not a jab directed at me. In the past, I have been attacked by more than a few unprovoked comments that were left anonymously, and I did not mean to visit that upon you, if it is not warranted.

Hopefully, then, you will remain an online friend, rather than Anonymous foe.