Issuing fines easy; collecting is not 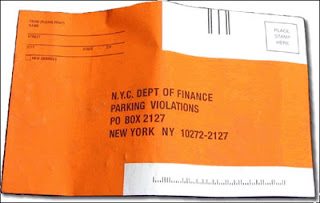 City Hall is owed nearly $1.6 billion in uncollected debt from fines and tickets, nearly half of which comes from related penalties and not the actual summonses themselves, a new report reveals.

The initial fines adjudicated by the Environmental Control Board, which handles summonses for 13 city agencies, amount to close to $483 million. Default penalties for failing to attend subsequent judicial hearings top $709 million, and interest totals more than $386 million.

Those figures are laid out in a recent, first-of-its-kind report from the city Department of Finance, which unveiled extensive details about the potential revenue that has long eluded city coffers.

Lock up the scoflaws then use taxpayers money for bail
I loved NY once.

How many of these summons are foreign diplomats parking illegally? These fines cannot be collected.

With regard to ECB Violations let's talk just about the NYC BUILDINGS DEPARTMENT for a moment. I would also include ECB Violations issued by the Depts. of Health and Sanitation that specifically relate to construction projects.

We know that when it comes to the NYC Department of Buildings in particular -- many of the legitimate ECB Violations that get issued by their inspectors to owners/developers/contractors, etc. in the end get "somehow" dismissed. As a result, no fines are incurred, when many times they really should have been. If the Violation is warranted, there should be no dismissal for any reason and the fine should be imposed.

The cure needs to take place, if a fine is applied or not. It should be cured and the fine still should be applied. If the fine is not paid within a reasonable period of time, the City needs to immediately put a LIEN on the property. If it is a construction project, no work should continue until the fine is paid and the lien lifted.

This is the solution. It is Simple! Why has this not yet been done? If you don't pay your water bill, they can and will put a lien on your property. And, the liens can be sold.

Today, many of the ECB Violations that were subsequently issued fines (and penalties added) for illegal construction and safety violations remain on the active and inactive construction projects to date.

PUT A LIEN ON THE PROPERTIES. The owners/developers will not be able to sell the property, until the lien is paid. Then, see how fast the fines get paid. Ultimately, if they are not paid in a reasonable period of time -- confiscate the property.

There really is no legitimate excuse for the City's inability to collect fines such as these. It's a no brainer. This is just another example of how inefficiently the City is run.

It's easier for the City to raise our taxes than to collect huge sums of money from the offenders of these violations.

I'm sure they expect that not everyone is going to pay their fines, especially say, drivers with out of state plates that leave and the city has no easy recourse (like towing their cars).

The only people left holding the bag are actual NYC citizens who try to play by the rules.

All of this is a distraction anyway. *oh poor city government, tried to tax people more and they wouldn't pay' wah wah wah. Maybe they could save some money not running leaf blowers day and night.

That's what these are? They litter the gutters by the dozens in Manhattan.

Most of amount of $$$ are violations from the DOB. Where us the report on who doesn't pay - these Developers who at the end of the day get tons of violations - let it to to default (after continuing to work) and then "sell" the property/project to related companies and then the $$ is never collected. The city continues to issue Certificates of Occupancy without making sure that all violations are paid for. If a developer does pay "Default" vioaltions - all the fines are reduced to pennies on the dollar. The only ones who have to pay are drivers and little homeowners. For $350.00 of default parking tickets you get towed or the boot. The developers get a free ride. Pass the law that DOB fines have to be paid before these towers are occupied/sold/rented!

If the City wants to collect some of the money it is owed, it has to make collection efforts. C'mon already. Issuing tickets that no one tries to collect on after judgment is much like putting toothless laws on the books.

Yeah in eastern Queens the 111 precinct is busy following ladies into their driveways to give them a $138 "you rolled through the stop sign by 46 & Springfield" ticket. Every day I see some dim bulb totally blowing that stop sign, and no uniformed municipal fundraiser in sight. The fine is of course paid, and 3 points now sit on that license. I can't understand this at all; I thought the state DMV is helping enforcement, or is this all a charade?