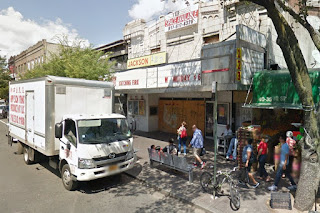 The end is near for the historic Jackson Theater. The property, located at 40-31 82nd St. in Jackson Heights, is currently owned by Sona Realty Corp. and is under contract with Sun Equity Partners. According to David Alani of Inline Realty, which is brokering the deal, Sun Equity Partners plans to demolish the 80-years-plus theater and rebuild and lease the space.
Posted by Queens Crapper at 8:57 AM

The last time I went to a movie, I was overcharged, the popcorn was stale, and we were the only ones in the theatre.
And the movie was "crap".

We pay these Hollywood buffoons millions, for what?
Then they live the high life in their mansions. (Not the sudo-McMansions we have here).
Then they travel the world on private jets, telling everyone that they have to save the planet.
Everyone should exist on tofu, ride bicycles, and recycle.

Can you say hypocrites?

What do you expect???

As to be expected here and to add Hollywood has turned to crap itself. Over 1/2 of Hollywood is Iranian Jewish refugees. The ones who have big money. They have baught and torn down almost every building and put up gory glass condos and ugly cement & sand crap. You now walk down Kings road or the Sunset Strip and not know where you are without using the Sunset tower as a guide point. Everybody looks "dark" mid-eastern. You cant possibly make good movies when the talent has been run out of town, its history and heritage completly erased !!

First, no one in Hollywood sits at their desk and says 'Let me make sure the Jackson theater has stale popcorn'. That is just poor business practices by a local businessman/hack.

If you don't like the movie, don't pay to see it. It doesn't get any more free market than that.

Number two: What does this have to do with the Jackson? You are just projecting your racist opinions on the rest of us. Don't like 'dark' mid-eastern people? Boy do you live in the wrong neighborhood!

I went to the Jackson many times growing up. It is sad what has happened to it but it could not compete with new multiplexes with stadium seating and state of the art digital picture and sound.

It joins the RKO Keith and the Elmwood as theaters of the past.

Harlem used to be Jewish, imagine that

i went to this theatre back in 2011. it was very crappy (heh) theatre, nasty seats and just a ghetto look. the tickets were cheaper though so that was a draw.

"stadium seating and state of the art digital picture and sound""

Oh yeah, name me one where the image doesn't look like a pixel digital projector and the sound is no better then my full size ported Lafayette Criterion speakers, Quad amp & EQ from 1974.
The movies these days aren't so hot also. My main beef is All quick cuts (you get a headache) short line by line dialog and all the killing, sex, T&A, explosions, fake looking digital effects, annoying tension music (and all the other crap to mask the fact nothings really happening)
Now add the shitty tiny seats, zero legroom for us over 5'11 and punks always making noise feet behind you because these partitions are so small.
--At $20+ a viewing they can keep it.

I'm friends with not one but TWO former theater owners. Its 100% Hollywood's fault. They went digital (to cut warehouse & distribution costs and send movies with activation codes and complex accounting software to theaters over the internet. This was mostly to kill off the privates and please the "big gorillas" like Warner, Viacam, Clearvierw (Clear Channel) who had been buying up every theater in sight A MONOPOLY thanks to Bill Clinton Telecommunications act of 1996.
ALL OF HOLLYWOOD KNEW every small small town private theater would be killed trying to afford not only advertising but the $500,000 digital projectors (lets not forget the $1500 replacement lamps they need every 400-800 hours).

To add STATE OF THE ART MY ASS !!
The industry is still using incandescent lamps in the digital chip projectors and the screen resolution is 10X LESS with a lower contrast ratio then you have with film. This is due to the masking effects and losses from the "chip" pixel substrates used in the projectors. (no way around it) In most cases you will notice these new screens are smaller and usually dark (to save replacement lamp costs).
Its just not worth it. The average 5.1 home sound system, LED TV, lazyboy chair and $12 bottle of wine is a much better experience.
--Well for me and my friends anyway. I will no longer go to a corporate theater because I know what these greedy bastards did to people and refuse to support them.

Watch out Midway Theater in Forest Hills. Another equity partnership that recently bought that property on Queens Blvd may do just the same. We hope not.

why do you think kids are shooting up schools?
you think all this violence in the video games & movies has no effect on undeveloped impressionable minds?

On April 20, 1999, students Eric Harris and Dylan Klebold murdered twelve students and one teacher at Columbine High School in Columbine, Colorado. The massacre ended with both perpetrators committing suicide. It has been confirmed that both Harris and Klebold were fans of Natural Born Killers. Prior to the massacre, they had used the initials 'NBK' as their code. In a journal entry dated, April 10, 1998, Harris wrote "When I go NBK and people say things like "Oh, it was so tragic," or "oh he is crazy!" or "It was so bloody", just because your mommy and daddy told you blood and violence is bad, you think it's a fucking law of nature? Wrong, only science and math are true, everything, and I mean every fucking thing else is Man made. Before I leave this worthless place, I will kill whoever I deem unfit for anything at all, especially life." Harris also referred to April 20 as "the holy April morning of NBK", and in an undated journal entry, Klebold (who was severely depressed) wrote "I'm stuck in humanity. Maybe going NBK w. Eric is the way to break free".[6]

During one of the "Basement Tapes" found in Harris and Klebold's homes, the perpetrators mention how Hollywood will want to adapt their life story, and they debate on whether or not Steven Spielberg or Quentin Tarantino (who conceived the story for Natural Born Killers) are appropriate choices to direct the proposed film. In 2004 the Columbine High School massacre was dramatized on Zero Hour, with the killers being portrayed by Ben Johnson (as Eric Harris) and Josh Young (as Dylan Klebold).

I haven't been in that movie theater in 20 years. The seats were broken and rats ran at my feet.