Still no official cause determined for Elmhurst's most historic house 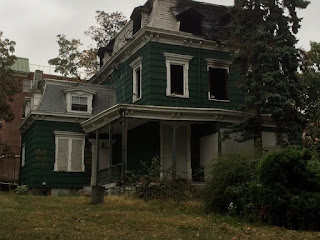 Fire officials are still investigating a blaze that tore through a historic home in September.

A spokesman for the FDNY said Monday it's is still under investigation — although "the cause of the fire is considered to be incendiary."

According to the Bureau of Fire Investigations, "incendiary" could mean fire caused by combustible material, ignitable liquid, fireworks, a torch, reckless use of an open flame, combustible gas, attempted arson, explosives, suicide, attempted suicide or self immolation.

There are still people who want to save it. Including Danny Dromm! Who would have thought?
Posted by Queens Crapper at 12:44 AM

We all know who is responsible for the arson, sadly we can do nothing about it since it's hard to proof.

I'm glad to see that some people care about their neighborhood, Queens and our historical past. This history is what made us! It is the reason we have what we have. I think it's such a worthy endeavor just to save this little piece of history to remind us of our heritage. This is such a small sacrifice compared to all the current and future developments (and over-developments) in NYC. Let's unite and support them! Sign the petition, write letters to Councilman Daniel Dromm, etc.

Great house! If Elmhurst can achieve this, it would be such a fantastic landmark. It would be like the Bowne House in Flushing and the Onderdonk House in Ridgewood, The communities and Queens all benefited by these historical sites! They add character to the neighborhood, increase awareness of our history and provide a wonderful experience and education for our children (and adults). Let's get behind this and make it work for Elmhurst, Queens and NYC!

If you live in NYC, this is a great movement! So much of our history is slowly disappearing right before our eyes. As New Yorkers, we need to reach out an save what we have. Please sign the petition (click on the link in this blog (last sentence) and invite other New Yorkers to spend a minute to support this.

As the first comment stated, we probably know who and why. This house has been around for hundreds of years. How is it that there was never a fire until it was purchased (along with the 2 adjacent properties) and all of a sudden a fire a month or so after the deed was transferred?

How about a comment from the developer? What are their intentions before the fire and what are they going to do going forward? If they are a responsible developer then are they willing to work with the community? Let's hear from them!

Why isn't our Borough President helping out with this ? Doesn't she want to help preserve history in " the world's borough"?????

We did some research and found the following information: the deed for this propertyat 90-11 56th Ave is under 9056 Realty LL. The LLC has the corporate address as 90-11 56th Ave (same as purchased property). The LLC has the names, Kui Lin and Bo Jin Zhu. Bo Jin Zhu seems to be a very wealthy developter, who recently purchased a property at 49 Dupont St. in Greenpoint for $48.5 million!!! Can we just ask him to leave Elmhurst alone???

If the purchasers of this site (9056 L&Z Realty LLC) acquired it to build the a monstrous apartment building, then let's at least insist they allocate a portion of the units to affordable housing. Just like the city has pushed other high value developers elsewhere in NYC. How about down zoning Elmhurst now to prevent towers going up and ruining entire neighborhoods. These neighborhood infrastuctures (schools, sewers, public transportation, sanitation, police, medical care, etc.) CAN"T support over development!!!!

Maybe Danny is starting to see the handwriting on the wall... or blog.

Ask developers to throw in a few neighborhood parks too. We could really use some as developers have done nothing but destroy neighborhoods and our environment all for their own greed!

All of the concessions just cut into the campaign contributions...

House there hundreds of years?

What are you people smoking? It must be some grade A stuff!

Still like to know why the borough historian is quiet (for once) and our friend Mitchell Gee has to say, and of course, the self styled 'umbrella' historical society with their $10 K grant for the 'Women of Queens' exhibit that we are all on the edge of seat waiting to see.

I think at the end of the year we need George the A put together a poster of this, the Newtown Church, Steinway Mansion, etc for Queens 'official' 50th Anniversary Landmarks.

Oh yes, if you want to landmark something, ask those carpetbagging kiddies from the East Side that landmarked the Clock Tower building in a matter of months.