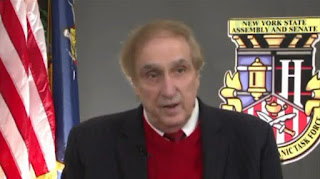 Lopez's lawyer, Gerald Lefcourt, says Lopez died Monday at Memorial Sloan-Kettering hospital. He was 74 and had been treated at Sloan-Kettering for cancer for several years.

Lopez resigned from the Assembly in 2013 over allegations of sexually harassing young women on his staff.

Lopez had been a member of the Assembly for 30 years and was the influential chairman of the Brooklyn Democratic Party organization.
Posted by Queens Crapper at 7:31 AM

A parasite on our city.

He passed from leukemia.
Couldn't have happened to a nicer guy.

Sadly, predictably, corruption, graft, systemic greed and epic fail in Albany are so entrenched, that Lopez himself (unbelievably) escaped all pretense of accountability, ethics and jail time, before death and finality (or is it?), got a crack at him.

Where the fuck is that rule. Who gives a fuck. Dead is dead and if you were a dick in life, you are a dick in death. You don't get a free pass just because you die, a normal process in life.

He stole $ millions from taxpayers and lied to the public and took advantage of innocent people....

I agree this blog is a game changer, but time's running out. Preet has recently failed to lock up wall street plunderers, and the trail on Cuomo is waning.

It's 2 minutes to midnight on the state of the state.

Although Mario's son has suddenly turned into an activist for the 15/hour wage if that is a sign of desperation and foreboding.

It's funny how endless corruption and theft couldn't get him in trouble, but politically motivated, evidence-free accusation of sexual harassment immediately ends his career.

Hold on, what about all the affordable senior homes that he supported in his otherwise overprice gentrified district? Even Richard Nixon did a few good things, such as the Environmental Protection Agency.


Every time I hear Pink Floyd's "Dogs", I think of mangy cur politicians like Vito Lopez.

You got to be crazy, gotta have a real need
Gotta sleep on your toes, and when you're on the street
You got to be able to pick out the easy meat with your eyes closed
And then moving in silently, down wind and out of sight
You got to strike when the moment is right without thinking.

And after a while, you can work on points for style
Like the club tie, and the firm handshake
A certain look in the eye, and an easy smile

You have to be trusted by the people that you lie to
So that when they turn their backs on you
You'll get the chance to put the knife in.

You gotta keep one eye looking over your shoulder
You know it's going to get harder, and harder, and harder as you get older
Yeah, and in the end you'll pack up, fly down south
Hide your head in the sand
Just another sad old man
All alone and dying of cancer.

ha ha charade you are.

Let the man rest in peace you Heartless People!!!
Fooled you Just Kidding,lol

This is no reason to cheer. The system that created and perpetuated Vito Lopez and others like him is still in place.

Excellent analogy, Anonymous, regarding the transcendent messages of Pink Floyd, and their song entitled 'Dogs!'

As usual, Pink Floyd was way ahead of the corrupt and brainwashed thinking of the socially engineered masses, and rank-and-file! Their words and lyrics have always proven to be a modern day meditation of the world's social ills, many of which were created by MAN himself---the most dangerous animal of them all!

Sadly, all political leadership is false, fake and failed (save for FDR, Teddy Roosevelt and a selective few), where the whole process works against its purportedly free citizens, with a vengeance of systemic greed, graft, cover-ups, kickbacks, payoffs---and, a 'Delay, Deny And Hope That You Die' stance---where, actual people have already died from languishing in obscurity for decades.

They are truly a SCOURGE that is now epidemic, and getting worse by the hour (as evidenced by Albany corruption and City Hall incompetence that is now entrenched)!

Where are you, Preet Bharara? Alas, your work has only just begun!

Those interns were pretty hot.

"the last few years he's just been beat up over the incidents but when you look at his legacy, Bushwick looks the way it does today because of Vito Lopez. It went from vacant lots and burned-out buildings to having an enormous amount of affordable housing for people."

Enormous amount? Affordable? And what people?

Now it makes total sense why that recent corpse was allowed to wreak havoc and molest.
The last two years in that area have seen the worst of gentrification. Predatory land pimping, obnoxious bullying landlords and obese rent hikes in addition to the obligatory over-saturation of artisan dining and drinking. And it's only affordable if you're in the area median income, which means that middle class and working poor people are fucked.

As with Vito, these people are less than animals and more like tapeworms.

Thank you, public watchdog, JQ (if only there were many more of you on active duty)!

Give Preet Bharara time, then, to bring finality to the 'Third Corrupt Albany King,' Andrew Cuomo. After all, it took Bharara nearly five years to arrest and indict Sheldon Silver, and I surmise that he is still collecting and gleaning as much evidence and proof against this dirtiest-of-all, Albany Sewer Rats!

And, until the last 'Emperor With No Clothes' is once and for all banished from a lifetime of public service (that has never really served the rank and file, the way a good public servant should always be responsive and accountable to his subjects), then expect more of the same entrenched, systemic greed, graft, kickbacks, payoffs and cover-ups that grindingly continue to erode and decay all pretense of honest, ethical leadership (that leads by example), as Cuomo and his broken Albany cesspool continue to devalue all honesty itself---and the public be eternally damned!

Alas, willful anarchy and plutocracy at the top, has always historically promoted extreme anarchy and vigilantism throughout the rapidly vanishing middle, and epic beggary, obscurity, quiet desperation and civil unrest and violence at the very bottom rungs of societal collapse (that is currently in mid level progress)!